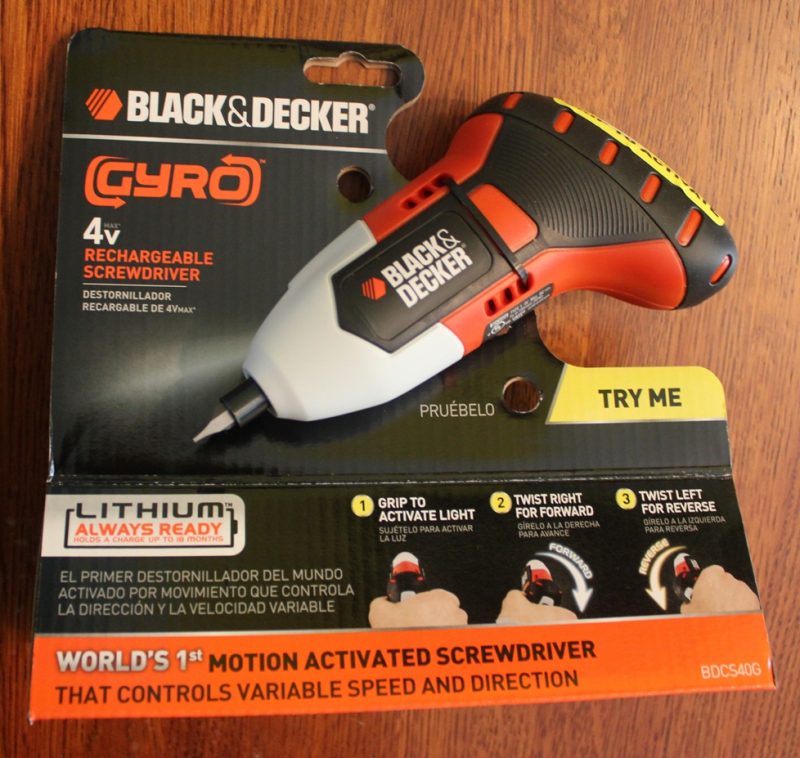 After being informed recently that a gyro screwdriver was on its way from California, several questions sprang to mind, not least among them “Why would anyone want a drink that tastes like Greek meat and OJ, even if there IS vodka in it? And dammit, isn’t the ice going to melt?!”

All became clear when the little package arrived. While it IS orange, I can confidently report that no vodka or Greek sandwiches were harmed in the making of this product. Instead, Black & Decker had provided us a sample of their latest high-tech offering, the Gyro rechargeable screwdriver.

Rocket science to make it, but not to operate

After ferreting out a utility knife and liberating the Gyro from its plastic clamshell packaging, I picked it up and, ignoring the instruction pamphlet (naturally), figured out how it works in about 5 seconds. (OK, fine, the big “Grip to activate” sticker might have been a MINOR clue…). There’s no trigger, no direction switch; press the fat “Gyro” button on the back of the unit, where it rests in the palm of your hand, and the little light comes on. Twist your hand to the left, the bit turns left; turn it to the right, the bit follows along. Twist it a little bit, it goes slowly; twist further, and let ‘er rip, all the way up to its max speed of 180 RPM. Easy and intuitive, with a bit of “cool” factor going for it due to the gyro technology—and a hell of a lot cheaper than an Iphone!

“We’re taking a technology people are familiar with using in motion-sensing video games, smart phones, and even toy helicopters and using it in a new and innovative way to create a unique power tool,” said Matt Nestorick, product manager for consumer power tools at Black & Decker. “The new GYROTM screwdriver harnesses the latest technologies to provide consumers with a unique DIY experience.”

Here’s one of the official commercials:


The Gyro comes with a built-in rechargeable 4V MAX Lithium-ion battery, a charger, and two 1” bits, a Phillips head and a slotted. A minor quibble—there is no way to store the extra bit on the drill, so those of you with less-than-Martha-Stewart-like organizational skills, such as myself, will have to be prepared to spend a little time searching out the bit that is NOT in the driver, which is invariably the one you will need. Black & Decker says the Gyro can hold a charge up to 18 months, so when you drag it from wherever you tossed it after the LAST project, it should be rarin’ to go. If not, it can be used with the charging cord attached, just in case. Assuming you didn’t lose that, too…

One early reviewer on Amazon liked the Gyro, but complained that it would be too slow for driving hundreds of screws, for example while hanging drywall all day. I’m thinking that’s probably not among the uses Black & Decker’s engineers envisioned. It got me curious, though, to see if the Gyro was Max enough to bury some drywall screws. (Who knows—maybe you’ll want to just replace a small section of drywall, perhaps after stumbling into it after consuming one too many screwdrivers that DO contain vodka). The verdict? Yes it can, if you’re not in a hurry, and you don’t have too many to do; it was getting tired after 6 or 7 screws.

Does what it’s designed to do

But that misses the point of this little driver; it’s only 4 volts, after all, making it just barely stronger than the economy. This is the driver I’ll throw in our kitchen junk drawer to grab when my wife comes home with a box that states “some assembly required,” or to tighten up the wall-mount bottle opener after a rough night. The Gyro is lightweight, easy to hold and use, and just right for crafters or light household use, which is what it’s designed for. Putting an addition on your McMansion? Rebuilding a ’67 Camaro? Reach for something beefier.  Tightening up a kitchen cupboard door hinge? Mounting some speaker brackets on the wall? Have at it! And when your household missions are successfully completed, be sure to reward yourself with a huge Gyro sandwich and a cool, refreshing screwdriver. The kind WITH vodka, preferably. The Black & Decker Gyro Screwdriver

is available at Amazon for just under $40.