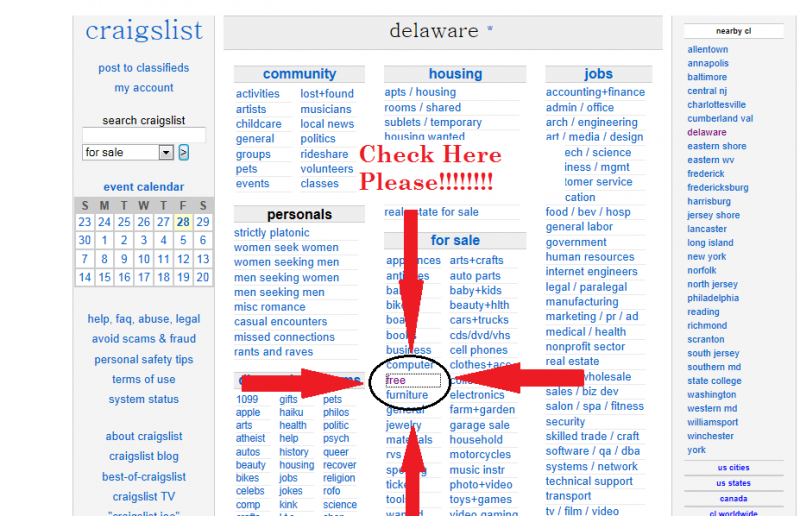 As you may remember I spent part of the summer tearing down some old shed that were attached to the back of my house. It was dirty, sticky, nasty work that I cherished every moment of. Or, at least I would have if it wasn’t 100° every day and if I didn’t have my year-round fur coat leading me to sweat to the oldies. Well $1200 of waste removed later and I was left with a giant mud pit, a small concrete slab and a concrete block foundation.  What to do with all that concrete?

I know I’ll put it on craigslist for FREE!!!!! It might seem counterintuitive, but spend some time looking at the free section on craigslist. You’ll see ads like: Free firewood – Just cut the tree down. Or, Free TV – No sound and black and white. Or, one of my favorite ones; Free Open Package of Adult Diapers. I know that one man’s garbage is another man’s treasure, but come on people. But there I was; not wanting to pay for removing the concrete but still having a couple of tons surrounding my mud pit like a redneck hot tub.

Because I was cheap and lazy, I decided to give Craigslist a shot. I have actually used craigslist before to sell some Adirondack chairs (with mixed results) and to give away a stove that didn’t work (which I had to beat people away with a stick). All I had to do was wait two weeks and out of a blue there was an email from some guy 25 minutes north of me and he oddly wanted/needed several tons of concrete for fill. The next day he showed up and took almost all of my concrete and may still need some more.

Serendipitous? Perhaps, but by offering my garbage to the universe that is the Internet I saved several hundred dollars and never had to leave the comforts of my home. I’ll be placing an ad looking for free fill dirt on craigslist and a few other sites as well to try to level the ground before I devalue my house anymore. Thanks to that wonderfully odd jumbo Internet flea market, Craigslist, my backyard is one step closer to perfection. So in the event that you have things to get rid of like old lumber, dirt, or even opened packages of adult diapers think about Craigslist first. And, if you’re a newb to Craigslist, be sure to check out Marc’s post of harnessing the power of Craigslist with some great tips to maximize your success.