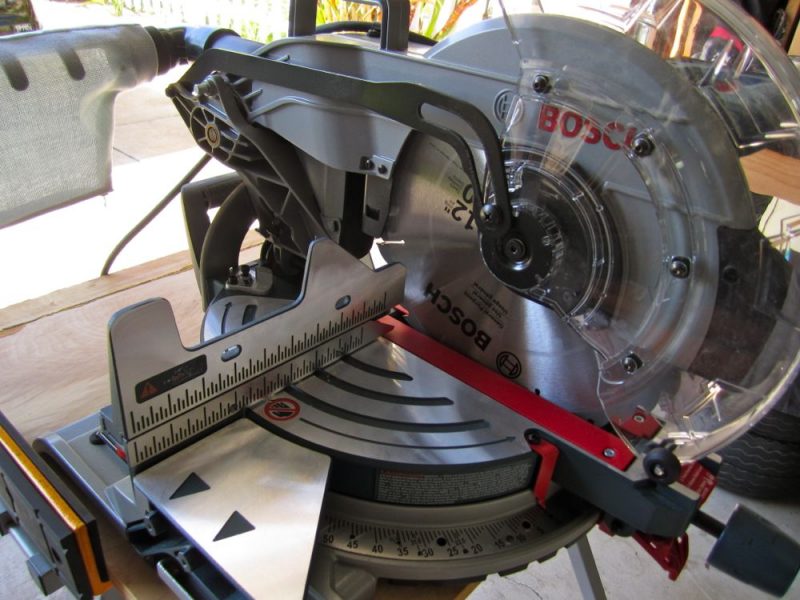 OK, so a pocket-sized miter saw would be a really bad idea. Some things just aren’t meant to be too small, or in your pocket. But a more compact, still full-featured miter saw is a great idea. Which is why we were happy to test out the new CM12 miter saw Bosch sent our way recently. We first tweeted about it back at the National Hardware Show in Vegas. This 12″ model packs plenty of power into a form factor that won’t necessarily put your chiropractor’s kids (and grandkids) through college. It’s priced within reach as well. But just how useful is it, given it’s svelte form-factor? Read on to find out more.

Last year, we reviewed the Bosch Axial Glide Miter Saw, and fell in love with it’s ample power, Rico-Sauve-smooth glide action, and capacity to cut small telephone poles. One thing we didn’t fall in love with was its portability. When a friend recently was looking to trim out his windows and borrow a miter saw, he opted to just buy his own rather than transport the axial glide beast from house to house, and up a flight of stairs. However, like many HomeFixated readers, I think he was just looking for an excuse to buy a power tool. Too bad I didn’t have the CM12 at the time. The CM in CM12 stands for “Compact Miter”, get it? The “12” stands for “12 Inches” of blade size. Those Germans are so sneaky with their model names and numbers! I’m currently on a bit of a productivity tear, swapping out original (but termite-devoured and nearly disintegrating windows) for some new historically accurate wood double-hung replacement sashes. It’s a long, arduous task, made more long and arduous by small-scale lead-abatement, an interior stain and finish that takes an eternity for me to apply, and experimenting with slow-drying organic linseed oil paint on the windows and trim. So by “productivity tear”, I mean I managed to replace 3 pairs of sashes and I’m onto my fourth window right now. Aside from over-sharing, the point of this paragraph is to get to the point that I’m working upstairs on window trim right now. And, since I have an obnoxious habit of having to make a couple dozen nanometer-scale precision cuts to get just the right fit on my trim, having the saw anywhere but right next to the install area would add days to the project. The CM12 Compact Miter Saw from Bosch turned out to be the ideal tool, since I could carry it relatively easily wherever I needed it. 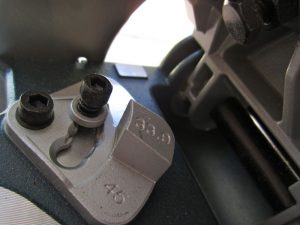 Keeping your miter saw close to your install point is a good efficiency move regardless of how particular you are with your cuts. At 43 pounds, vs. 65 pounds for the 12″ Axial Glide, the CM12 still isn’t something you’re going to curl with your pinky. However, Bosch took a number of steps to make the CM12 one of the more portable saws in its class. First, Bosch added two handles to the saw. The top handle is something we’ve seen before, and it’s useful for initially getting the saw off the ground, or just repositioning it. Like the bedroom in most episodes of Cribs, the back handle is where the magic happens. Bosch actually designed the handle so that the saw hangs almost perfectly balanced, straight down. Why is that important? Assuming you keep the flat part of the base closest to your body, you can actually carry the CM12 at your side. Sure, you can carry other similar saws at your side too, but usually doing so results in some collateral damage to your knees and legs. I said almost perfectly balanced in that I think the handle could have been shifted just a tad so the bottom of the saw would hang just a touch kicked-out, but that’s a minor quibble. While it’s still not exactly a briefcase, and you’ll want to use caution moving through doorways with it, the CM12 makes transporting other similar saws look downright awkward. Don’t let the major selling point of portability fool you. The CM12 is no limited hobby saw. If you’re just doing a straight “chop cut” (no miter), this saw will chomp right through a 2 x 8 (or a 2 x 6 if your doing a 45 degree cross cut). It can handle 6 inches max for crown and a full 6 3/4″ for base up against the fence.


What’s a miter saw without bevel and miter, right? The Bevel Lock Lever is a bright red lever that’s conveniently positioned on the right side of where the saw arm mechanism meets the saw base. No fumbling around behind the saw needed. The lock is within reach and easy to operate. Keep in mind it’s a single bevel Obama-style saw, (it leans to the left). If you want a saw that can Romney too, you’ll need to look elsewhere. A bevel stop on the left of the saw let’s you set a stop for 45 and 33.9 degrees with a quick pivot of the stop (or -2 degrees on the right side). The 33.9 degree setting is for anyone geometrically-gifted enough to tackle crown molding using spring angles). The CM12 has 10 detents that make adjusting miter to most common angles easy-peasy. If you like more granular control over your angles, you can flip the detent override for more free-swinging action than Plato’s Retreat. Just make sure you still lock the angle down with Bosch’s handy miter lock knob, conveniently located front and center.


The 40 Teeth 12″ blade that comes with the CM12 will cover you for most general purpose cutting needs. However if you’re doing fine trim work, you’re probably going to want to step up to a blade that’s more toothy. Luckily, while not tool-free, blade changes on the CM12 are pretty painless. Bosch thoughtfully included a multi-purpose wrench that resides conveniently in a vibration-resistant mount behind the left fence. One end of the tool loosens a small bolt so you can pivot the guard assembly out of the way, while the other end loosens the larger blade bolt (while you hold in the arbor lock button). Keep in mind the blade bolt has left-hand threads, so make sure you’re turning in the correct direction when loosening and tightening. Once you remove the blade bolt and outer washer, you can remove the blade and swap on a new one. We also tried using Bosch’s laser washer (sold separately), but unfortunately found it too dim for us to recommend. Whether you’re swapping blades for different materials or you’ve used your CM12 so much the blade has dulled, blade changes are a relatively quick and easy affair.


One of the first things I noticed using the CM12 was the safety trigger, which is easily activated with just the thumb of either hand. It took a little getting used to compared to the side-mounted safety of the axial glide. I definitely liked the new safety mechanism much more, it’s very intuitive and easy to operate. Bosch’s signature sliding base extensions found their way onto this saw too, giving you a sizable 37″ base to work with. Like most other Bosch miter saws, the extensions are precision-built, and slide in and out of the base with ease. They’re great for adding more material support if you’re not setup with a larger material support table or rig. A sliding fence also is smooth like buttah’, and helps when doing high angle bevel, miter or compound cuts. It operates with a simple flip of a lever too. Bosch also threw in a material clamp which comes in handy at times. It’s held in place using friction, making it easy to remove or add back to the saw. Bosch included nail holes, bolt holes and a nice flat clamping area to mount your saw. I found the clamping areas particularly helpful since I setup the CM12 on a makeshift workbench created by laying a couple 2 x 6’s across a balcony railing, and later, a raised deck. Clamping it into place raised the possibility of the clamps getting in the way, but it’s a handy way to make a quick, temporary attachment. Remember, keeping that saw close to your work means you’ll beat just about everyone to happy hour.

Looking for more details? Our intrepid buddy Barnaby of ToolSelect.com talks with Bosch’s Jason Feldner for a quick overview. Please note; we endorse the use of flip-flops at media events, but not so much on the job site.

Overall, we think the CM12 is a highly versatile saw that’s well designed for quick and easy transport. Whether you’re cutting framing, trimming-out your windows, or putting in crown or base, the Bosch Compact Miter Saw can handle most jobs you put it to task on. It’s a single bevel, and it doesn’t slide or glide, but that’s partly how it retains its portability. With one of the most thoughtfully designed carry-handles around, it’s a right at home in your garage, truck, jobsite, and everywhere in between. Thanks to the 12″ blade, most people won’t find themselves limited by the saw’s functionality or capacity. At a price point of just over $350 on Amazon, the Bosch CM12 12-Inch Single Bevel Compound Miter Saw

is within the grasp of both pro’s and homeowners alike.