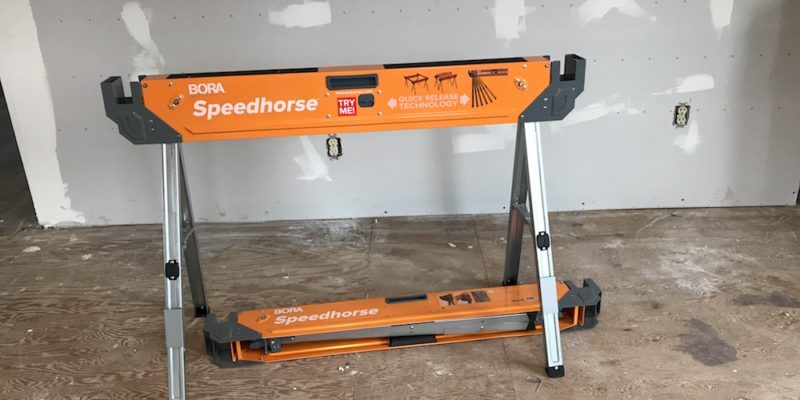 Here at HomeFixated, we’re all about being supportive. Heck, everyone can use a bit of support now and again. The folks at Bora Tool feel the same way, and they just came out with a new product that offers instant support. They may not help much with your recent breakup, or the loan you’re after for that prime San Diego waterfront estate, but they can sure help support whatever tools and materials you need for your next project – up to 1,500 pounds of them. Bora sent us a pair of these to put through their paces. Come sit in a circle with us, join hands, and ponder the ups and downs of the Bora PM-4500 Speedhorse.

Aimed primarily at contractors, woodworkers and serial DIYers, the Bora PM-4500 Speedhorse is first and foremost a very sturdy sawhorse. The “Speed” in its name refers to how quickly it can be set up. More on that shortly, but the short version is VERY quickly.

The steel construction can support up to ¾ of a ton of weight, and the features on the Bora PM-4500 Speedhorse are very well thought out. Several pre-drilled holes across the top make it easy to attach a sacrificial 2X4, to prevent the sparks and foul language that ensue when a spinning saw blade contacts a steel cross member.

Here’s the complete list of specs and features, followed by a supportive overview video. Check ‘em out, and then we’ll take a closer look at the Bora PM-4500 Speedhorse.

Piling Up The Features On The Bora PM-4500 Speedhorse

It’s obvious from the moment you liberate the big orange rectangle from its packaging that the Bora PM-4500 Speedhorse is a big step up from the flimsy plastic sawhorses commonly available. Weighing around 18 pounds, it’s a sturdy hunk of steel. The legs tuck neatly inside the top section, making a relatively compact package to store and transport.

As I mentioned, the feature set on the Bora PM-4500 Speedhorse is well thought out. The top is covered by a non-slip material. The legs have sturdy steel bracing, and there are protective feet to prevent damage to flooring and reduce slipping. Once it’s set up, it feels very stable and solid.

In addition to the pre-drilled holes for a sacrificial top support, each end of the Bora PM-4500 Speedhorse has a slot sized for a piece of 2X material to be inserted on edge. A 2X4 fits perfectly into the slot, with no slipping, allowing you to create a support between two Speedhorses.

There are protected holes on the side of the Speedhorse to secure the material to it, creating a solid and stable platform. If a 2X4 is used, the top edge lines up perfectly with the sacrificial boards across the top of the Speedhorse, making a perfect 360 degree support base.

The Bora PM-4500 Speedhorse: Satisfying Your Need For Speed

Now it’s time to talk about the “Speed” in Speedhorse. Getting it from that orange rectangle to a usable support literally takes less than two seconds. Just hold it up, push up the release, and the legs drop down and lock into place. Every time I set up the Bora PM-4500 Speedhorse, the legs locked solidly into position.

All done for the day? Takedown is almost as fast. Just lift up the Bora PM-4500 Speedhorse, tilt it a bit, pull the Leg Release flap, and the legs retract toward their storage cavity. You just have to finish tucking them in for the last few inches. Tilt it the other way, repeat, and go treat yourself to a refreshing beverage as a reward. Either set of legs can be retracted first, a nice feature to save you a few extra seconds after a long day of doing whatever it is you do.

Here’s a video from Bora, showing just how fast and easy it is to set up and take down the Bora PM-4500 Speedhorse:

Making A Stable Table With The Bora PM-4500 Speedhorse

Given my prior history of inadvertently destroying things with sharp blades, I decided to install the sacrificial tops on each Bora PM-4500 Speedhorse before letting my saws anywhere near them. The pre-drilled holes made it easy, and a long bit extension made it even easier. I also cut a couple of short stringers, to give myself a four-sided base.

I used a scrap piece of wooden countertop as a work platform, screwing it down to the tops for extra stability. I first used it as a base for my compact Milwaukee compound miter saw (full review coming soon). The Speedhorses provided a rock-solid platform to work from, which is what I want when I have a rapidly spinning, sliding blade close by.

I also used it as a base for running several lag screws through some dimensional lumber. Once again, everything stayed firmly where it belonged. The working height of around 33” was very comfortable. Once I was finished, I unscrewed the platform, and had the two Speedhorses collapsed and up against the wall in just a few seconds.

Ready For Some Support?

I was impressed by the Bora PM-4500 Speedhorse. It’s sturdy and well-made, has great capacity, and includes plenty of features to make it more useful. The only addition I can think of to make it more user-friendly would be to make one of the legs adjustable, to make it usable on uneven surfaces. It’s a nice addition to Bora Tool’s lineup of other support items, including sawhorses, miter saw stands, and the unique Centipede Sawhorses we looked at a couple of years back. 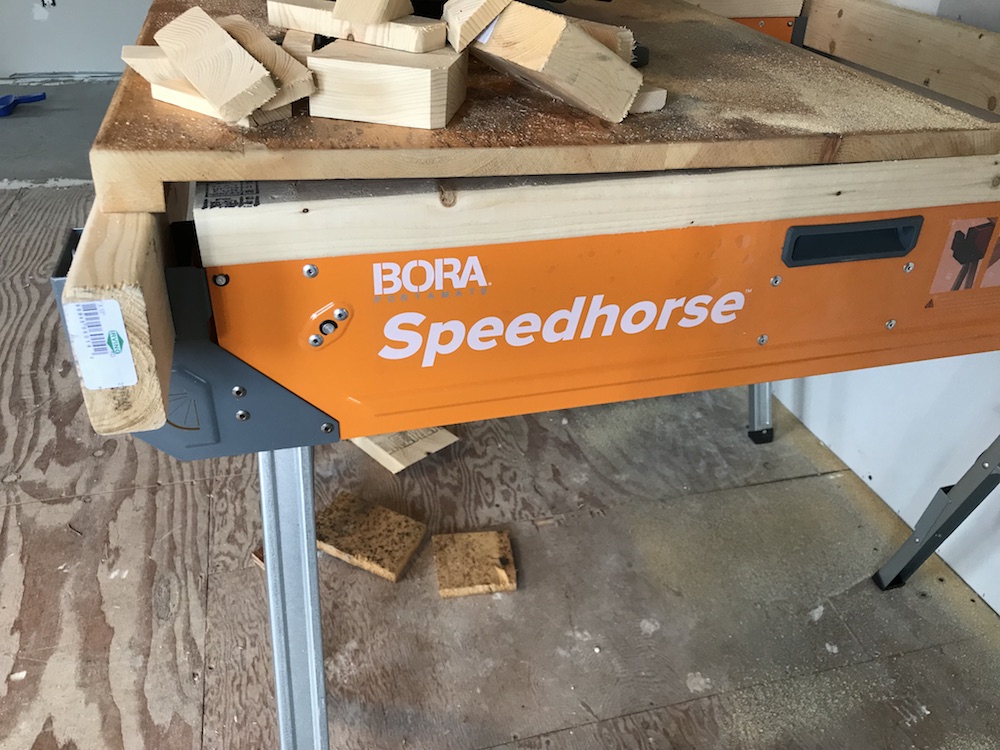 Buy the Bora PM-4500 Speedhorse directly from Bora for about $79:

Or check for a retail location with their online store finder.