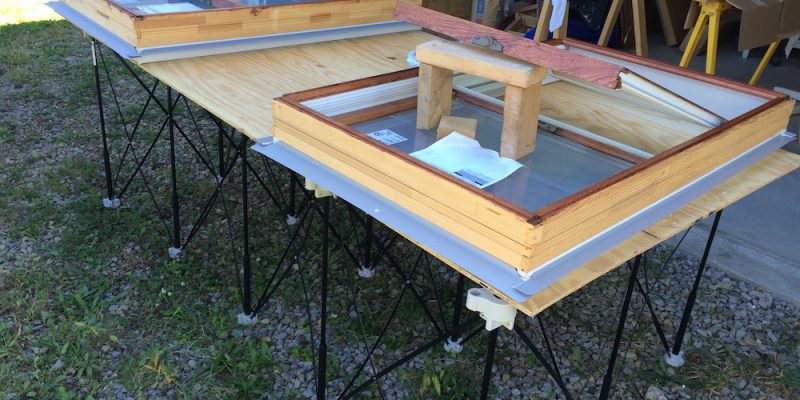 A short while back, we took a look at the innovative Centipede Sawhorse. This innovative product starts out as a meek and mild, 11 pound, 6”x9” bundle of steel poles and struts. Give it a quick shake, though, and seconds later it’s the Sawhorse of Steel – a 2’x4’ platform capable of supporting up to 1,500 pounds! We were impressed by the Centipede Sawhorse, and when the folks at Centipede offered us the opportunity to try out its big brother, the Centipede Support XL, we jumped on it. Literally.

Like its little brother, the Centipede Support XL is constructed of a series of poles and interconnected flat steel struts. The unique design allows the system to support an incredible amount of weight, especially given its own compact size and weight. When collapsed, the Centipede Support XL measures just 9”x14”x38”, and weighs just 29 pounds. It takes less than five seconds to open it up or collapse it, and it comes with a fitted bag to make it easy to transport and stow away.

Each point of contact is topped with a non-marring polymer P-Top. The P-Tops help prevent damage to the metal struts, in case you didn’t dial in that depth of cut just right. They’re replaceable, and they rotate 360° to accommodate drop-in accessories. The kit also includes a couple of clamps, to keep your material from going over the edge.

You can place large sheet goods directly on top of the P-Tops. To provide even more flexibility, each Centipede Support XL also comes with a set of X-Cups. The X-Cups are sized to fit a 2×4, and allow you to run them along the length or width of the Centipede. This allows you to set up individual work stations, or stack smaller dimensional lumber on top.

Let’s Take It Outside

Shortly after the Centipede Support XL arrived, my son snagged it to use on a kitchen remodeling job. He and his buddy had lots of trim to cut, along with a butcher block counter top. He found a semi-levelish spot in the yard, and shook out the Centipede to get it set up. The struts accommodated the less-than-perfect terrain well, and they quickly had a work area set up.

My son’s buddy, a lead carpenter at the construction firm where my son works, was impressed by the design and functionality of the Centipede Support XL. The unit gave them a good, stable surface to get their cutting done without making a mess indoors.

Farm Livin’ Is The Life For The Centipede Support XL

The old farm we bought a few years back has a seemingly limitless chore list. We are renovating the entire house, and always have a project or three underway. A couple of current tasks provided us with a good opportunity to put the Centipede Support XL to work.

The first project involves replacing a ceiling in one of the bedrooms. I had to install new nailers perpendicular to the original ceiling joists, and around the edges of the room, to attach new drywall. The ceiling was 11’ 9” wide, so I just had to trim a few inches off a stack of 12’ 2x4s, and cut a bunch of filler pieces to go in between the ends.

I set up the Centipede Support XL in the driveway, and slapped a piece of plywood on it. I wanted to be sure the work surface was very secure before I set my pricey miter saw up on it, so I did what any reasonable person would do – I climbed up on the platform and jumped around a bit. The setup felt very secure and solid, so with what’s left of my mind put at ease, I jumped off to make room for my miter saw and a stack of 2x4s. Several minutes later, the cuts had all been made, and it was off to install everything.

About that jumping business, here’s our Official CYA Disclaimer: Don’t do it! You might get hurt! It’s pretty clear, though, that these things are pretty rugged. Even though the Centipede folks tell you not to sit or stand on their products, they’ve posted pics and videos of some pretty extreme load tests of their own, including 2,500 lbs. of sand bags, a pallet of cinder blocks, the front end of a full-size John Deere front-end loader, and 2,900 lbs. of their own Centipede Support XLs.

Here’s a sequence of short videos of the Centipede Support XL supporting LOTS of weight in various amusing ways (although, admittedly, with no one jumping around on it…):

A No-brainer For A Frequent Stainer

Another ongoing farm project is replacing all the windows in the house. My brothers and brother-in-law all graciously agreed to spend an upcoming weekend helping me get a batch of them installed before the snow files. We bought the windows with unfinished interiors, so we could stain them to match the woodwork I was putting in. Now the pressure was on to get them stained and polyurethaned prior to the commencement of Bro Fest.

My wife has had the thankless task of doing most of that staining and sealing. When she saw how useful the Centipede Support XL was for my cutting project, she “Mine nowed” it to be her personal staining station. We first set it up outdoors, which was ideal because it allows the nasty odors to dissipate. On our next “fun weekend at the farm,” it was much cooler, so we set the platform up upstairs.

The centipede Support XL made it much easier for her to get her work done. When using regular sawhorses, there was never a place to set the brushes, cans of stain and polyurethane, rags, etc. The 4’x8’ surface of the Centipede had room for all that, plus two windows at a time. This made her very happy, which is, of course, my primary goal in life. (She doesn’t often read these, but you never know…).

When the Centipede products first came out in 2013, there were two products: The 2’x4’ Centipede Sawhorse and the 4’x8’ Centipede Support XL. They’ve since filled in the gaps; here’s the current Centipede lineup:

The Centipede Support XL is truly an innovative product. It helps me stay organized – an area where I definitely need help – by letting me keep everything in one spot. There’s plenty of room to keep a drill, impact driver, circ saw and Sawzall, and lots of other tools, miscellaneous fasteners and other supplies, in a central location. And there’s room to spare for the miter saw.

The line of Centipede products has obvious appeal to contractors and DIYers. Think about it, though, and I bet you can come up with a lot of other uses for them. They’d be great for anyone who sells at flea markets, craft shows, or farmer’s markets, tailgaters, garage sales, a place to set out food at cookouts or parties, or a temporary storage area or work surface. My son already called dibs on it for his annual neighborhood block party. 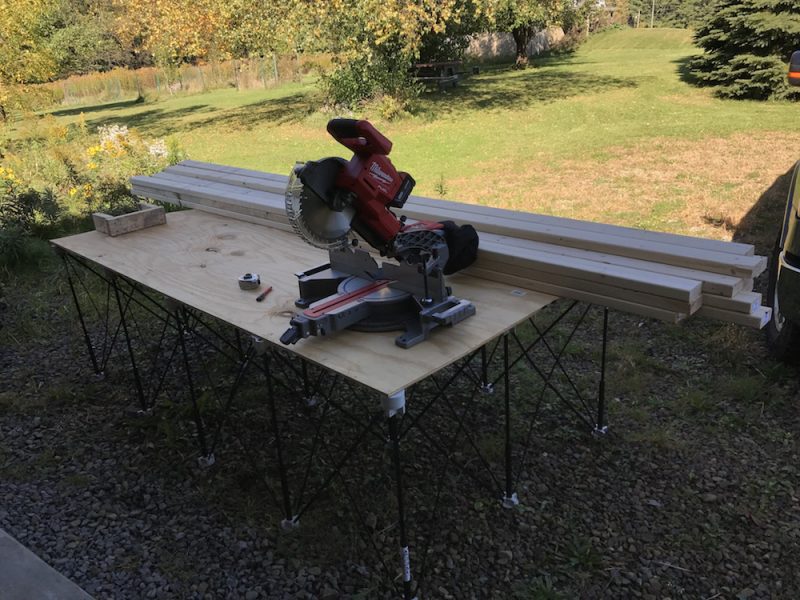