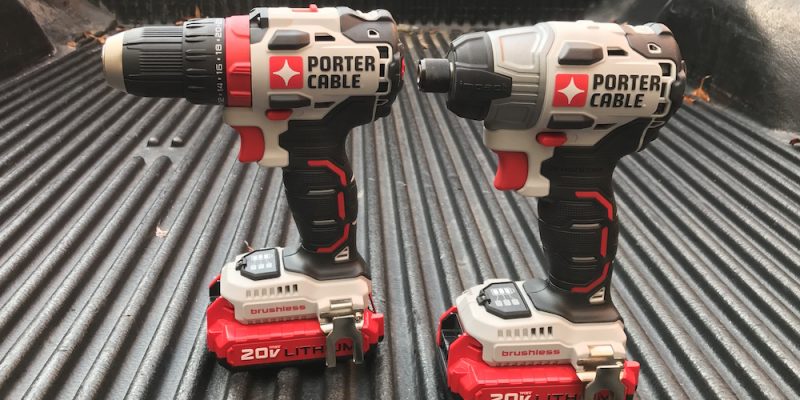 The iconic Porter Cable brand has been around for over a century. Over the years, they’ve been responsible for a lot of innovation in the tool industry, introducing such industry staples as the first portable belt sander and the world’s first helical drive circular saw. Several acquisitions later, they’ve had their ups and downs, with some quality issues along the way. They are now under the Stanley Black & Decker umbrella, and trying to re-establish their brand identity as a maker of quality, pro-grade tools. They recently unleashed their latest efforts in that endeavor – the Porter Cable Brushless EDGE 20V MAX Drill Driver And Impact Driver.

We’ll start out with the Porter Cable brushless drill (PCCK607LB). Porter Cable says that the new drill boasts a re-designed chuck with better bit retention, in addition to the increased run time and power, over its predecessor, the PCC601. It also offers higher top speeds in both gear ranges, along with some extra splashes of red color on the body. Here are the specs from Porter Cable:

The Porter Cable brushless drill is sold in a kit that includes two 1.5Ah Li-Ion batteries, a compact charger, and a reversible belt clip. The charger is pretty slick, compared to the standard chargers we usually see. It’s just wide enough to slide over the contacts on the battery, about 1-1/4” high, and has a small power adapter on the plug. That saves a fair bit of room in the tool bag; the downside is that it takes around 80 minutes to charge a fully depleted 1.5 Ah battery. Since the kit comes with two batteries, that should allow enough time to re-juice the spare.

Speaking of room in the tool bag, the Porter Cable brushless kits are BYOB (Bring Your Own Bag) – you’ll need to provide your own, if you want an easy way to keep everything together and schlep it all around. Not a huge issue; low-budget bags are available at any home improvement center, or online. It would be nice to have a bag included, but since the drill kit is only $139, you can’t bitch too much.

A torque setting ring around the ratcheting chuck lets you dial in the amount of force for your task. It operates very smoothly. There’s a separate ring, to switch between DRILL and SCREW modes, and a slide switch to select between high and low speed settings.

Other features include an LED light that comes on when you pull the trigger, and stays on for 18 – 20 seconds. It’s aimed so it actually shines on the work area, which isn’t always the case with these lights. Also included are a reversible belt clip, a double-ended driver bit, and my personal favorite – a built-in bit holder. When you’re working with more than one type of fastener, and you have the short attention span of yours truly, it’s handy to have a dedicated spot for the extra bit.

I have large hands, and the drill was very comfortable to hold. My wife has itty-bitty girl hands, and she said the fit seemed fine to her, too. The rubber overmold adds decent cushioning, and should help when using the drill for long periods. Compared to other drill drivers I own, the Porter Cable brushless drill is pretty lightweight, which is a definite plus when you’re schlepping it around all day.

So enough with the details, let’s fire it up! The Porter Cable brushless unit is a drill DRIVER, and I wanted to test both the drilling and the driving. I grabbed a box of 1-5/8” construction screws, and set the drill to the max speed (naturally!) and the SCREW setting. I sank and removed about 30 screws, and the Porter Cable brushless drill had no trouble with any of them. The drill driver operated very smoothly, and never stalled, even when I buried the occasional screw ¼” below the surface.

Now it was time for the boring portion of the test. To accomplish the boring, I chucked up a ¾” auger bit. Note: The various drill and driver bits stayed firmly in the chuck, as long as I locked them in well by ratcheting the chuck until it clicked two or three times.

I set the selector to DRILL, set the speed selector to 1, and drilled ten holes through doubled up 2x4s. The drill felt like it had plenty of power, chugging steadily through with no stalls. I set the speed to 2, and it stalled after about an inch. This is pretty typical; for a bit that large, you would normally use the lower setting, which is slower but provides much more torque.

Since getting my first impact driver over four years ago, an impact driver is one of the tools I schlep along to almost every job. These amazing little tools can sink large fasteners quickly, while avoiding stripped fastener heads and twisted wrists.

The features on the Porter Cable brushless impact driver (PCCK647LB) are similar to those on the drill driver. It comes with the same LED light, belt clip, and bit holder. It has the same battery gauge on the base, and the same push-through switch for direction changes. The directional switch is the one control on the impact driver that felt a little chintzy; there’s a bit of slop to it, and its short throw makes it a little tougher to stop it in the center (locked) position. Not a huge deal, as most of the time you’re just changing from forward to reverse, and pushing the switch all the way through.

The impact driver is very lightweight and compact, which makes it easy to use, even in tight spots, such as between joists and studs. The chuck on the Porter Cable brushless impact driver is simple to use, and works well. To install a bit, just push it in. to remove it, pull out on the collar. The bit holder has a recessed spring that pushes the bit out, making it quick and easy to get those buggers out.

Note: NEVER use a short 1” bit, unless you’re prepared to use lots of foul language, and make a trip to the service center. The short bits can become stuck inside, due to the tremendous torque they get subjected to, and there’s not enough protruding to get a good grip. Ask me how I know.

To try out impact drivers, I like to feed them 6” Timberlok screws until they beg for mercy. I chucked up a driver bit, and proceeded to bury and remove the Timberlok screw through two doubled-up 2x4s attached to a 4×4 post.

The impact driver got a little warm, but it never gave up until the battery was dead. It averaged about 10 seconds to completely bury the 6” screw. For comparison, I fired up my DeWalt impact driver, and buried the screw three times. The times were almost identical, with the DeWalt averaging maybe a second faster.

The Porter Cable brushless impact driver buried and removed the 6” Timberlok 24 times before the battery took its nap. It also got number 25 about halfway in. I think that’s pretty fair run time for a little 1.5 Ah battery. According to Porter Cable, the impact driver can sink over 1,300 2” screws on a single battery. If anyone has the time and enthusiasm (and 1,300 screws) to verify that claim, let us know how it turns out.

Edging Closer To A Decision?

Porter Cable’s target market for the Porter Cable Brushless EDGE tools is the budget-conscious residential contractor or serious DIYer. My initial concern was that the 1.5 Ah batteries wouldn’t last long enough to be useful, but the batteries seem to hold up pretty well, thanks to the efficient brushless motors. The tools will accept any Porter Cable 20V MAX battery, so if you have other P-C tools you can snag a battery if you need it. There is a 4.0 Ah battery available for power users and others who want to make sure they have enough juice to finish the job without having to come down off the roof, or out of the crawl space.

Both tools seem well designed and well made. They have a decent amount of power, and worked very well during my testing. The Porter Cable Brushless EDGE tool kits, with the driver, two batteries, and a charger, are a bargain at an MSRP of only $139. The absence of a tool bag and the relatively slow charging times are the only negatives.

To quell the misgivings of those who may be concerned over how well the tools will hold up, Porter Cable is backing the tools with a solid warranty: Three-year limited, one-year service, and a 90-day money-back guarantee. The Porter Cable Brushless Edge Drill Drivers and Impact Drivers have been available at select Lowe’s stores since September, and will be available nationally at Lowe’s and independent retailers in November 2016. 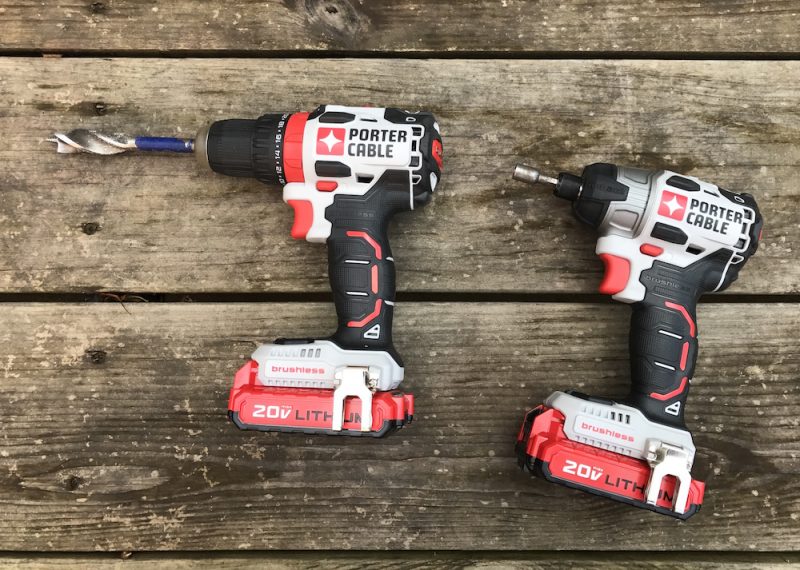