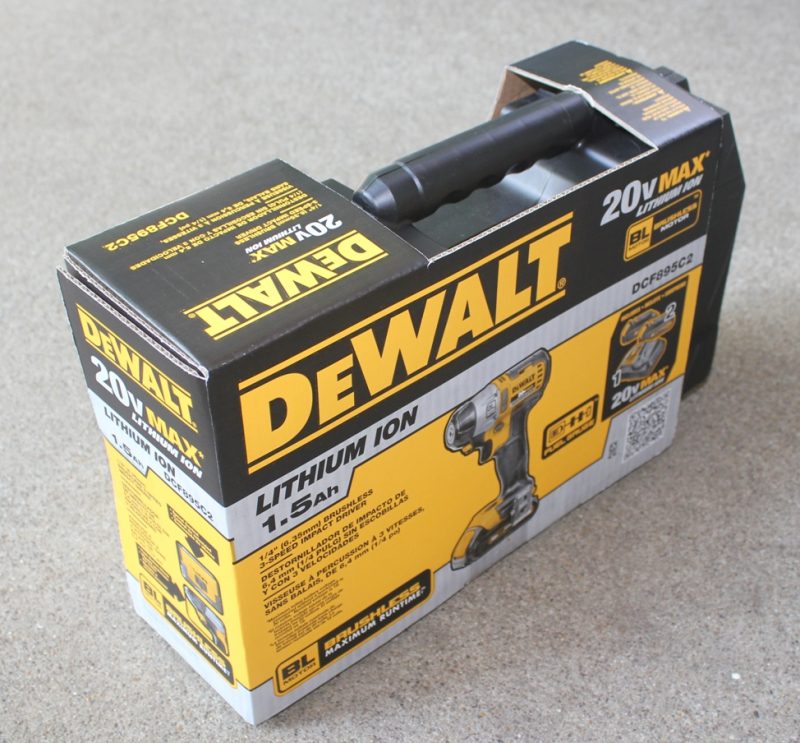 Usually when I buy a tool, it’s to replace an older one that’s gone to the great Tool Crib in the Sky (or, sometimes, in the other direction). Other times, it’s to fill a need for a specific job, e.g. a hammer drill for making connections to concrete. Once in a great while, I get lucky and stumble across a tool I never even considered getting—mostly because I was unaware of how said tool could simplify some task and make my life even more of a carefree paradise.

My latest Woo-hoo! moment came recently, when DeWalt provided HomeFixated with a DeWalt DCF895C2 impact driver. Prior to this, impact drivers were a product-line I hadn’t really experimented with. My first response was to think of it as an impact WRENCH, an air tool I used many years ago while working on cars—breaking lug nuts and timing chain sprockets loose, etc. And they’re still around and widely used; an impact wrench is the tool you want when you’re dealing with large, heavy-duty nuts and bolts.

An impact DRIVER, however, is a different beast; and a beast it is! Using a very fast series of rotary hammer impulses to strike the driver bit (in the case of the DeWalt, up to 3,300 per minute), the impact driver can easily sink or remove lag bolts and long screws in metal or wood. Very little pressure is required, and there is almost no torque feedback felt by the operator – great for avoiding sprained wrists by the way.

This tool makes use of brushless technology, which is fast becoming the standard for many cordless power tools. From DeWalt’s web site:

We also found the video below showing the drill tumbling around in a portable cement mixer with some paving stones, then being pulled out and used. Not sure whether that would affect the warranty…(“Hey—I saw it on the instructional video on your website!”) – If you pursue that angle, don’t say you saw it on HomeFixated, OK?

The drill has a switch with three speed settings:

The chuck accepts 1” driver bits for very close-quarters fastening (although it won’t lock them in).

The impact driver in action

My current testing battleground is an old farmhouse I’m renovating in Western PA. I charged the 1.5 Ah batteries ahead of time, which took roughly 30 minutes each, and brought along some 6” Timberlok screws. The driver is VERY light and compact—3 pounds with the battery, roughly 5” long. I was very skeptical of how well something that small and light could do against a 6” screw, but I lined it up, without pre-drilling, against four 2X4 studs, and let ‘er rip.

After going easily through the first stud, the resistance was enough to trigger the impact feature (you’ll know right away when this happens—a fairly loud, rapid hammering noise will shatter the tranquility of your serene work environment). At that point, I just watched that 6” screw quickly, steadily disappear through those four studs, and actually buried the head about ¼” in before I let go of the trigger. DAMN!! I was so impressed, I had to try it again, and ended up burying 5 more in the same effortless fashion. I then removed them all—aside from that being part of the test, they’re a buck apiece! I then used the DeWalt for the rest of the afternoon, as I firred out a very uneven ceiling with 2X4’s and 3” construction-grade screws.

My impressions from a day of use? WOW! How did I not know what a fantastic tool an impact driver was? What an improvement from using a drill-driver for this sort of work. Often, when driving screws with a drill-driver, they’ll cam out and you end up stripping the head (and who wants a stripped head). The rotary impact motion on THIS tool tends to keep the bit firmly in place, with almost no pressure required.

The ¼” hex shank chuck works great—just push the bit in and it locks in place; push the button underneath it to remove the bit. You can quickly swap out driver bits or hex-shank drill bits. There are three LED lights surrounding the chuck, giving the drill a little Star Wars vibe as it focuses the light right on your target. They also stay on for 20 seconds so you can admire your handiwork, if you’re so inclined. After holding the driver overhead all afternoon, I was a far happier camper than I would have been had I been holding up my 4.8 pound Hitachi drill-driver. As for battery power, I expected the smaller 1.5 Ah battery to fall short, but it went all day, and still had two of its three bars lit on the battery gauge (a handy feature, by the way, to check remaining charge before climbing a ladder or burrowing into a crawl space). The brushless technology helps greatly in extending battery life.

Bottom line—this tool just took me from “What’s an impact driver?” to “I ALWAYS have my impact driver along!”. With each fastener I drive, I’m STILL impressed at the ease and speed this tool provides, and that something so small and light can produce the results this Dewalt does. This tool would be a welcome addition to the toolbox of any rough or finish carpenter and is a must-have for HVAC installers, electricians, deck builders, plumbers, and anyone who has a lot of fasteners to install. I highly recommend you find someone who has one and try it out (if you can pry it out of their hands!), or just go out and buy the DEWALT DCF895C2 20-Volt MAX Lithium Ion Brushless 3-Speed 1/4-Inch Impact Driver

for around $235 from Amazon — I promise it will have a HUGE impact on the way you work.