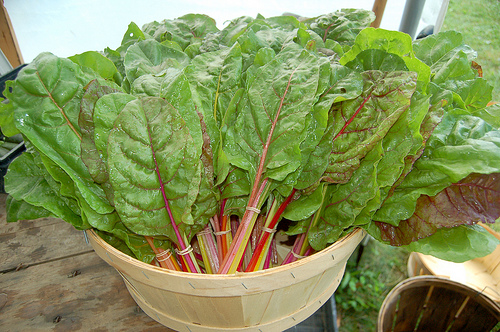 Ok, so Swiss Chard probably has nothing to do with the Swiss. Although I’m sure there are a number of Swiss gardeners that grow Swiss Chard to go into their gemischter salat. There is a better chance that Swiss Chard, a member of the beet family, was first cultivated in the Mediterranean, perhaps Italy. It is used commonly in Mediterranean and Arabic dishes. Swiss chard is a great little vegetable and one that you should think about adding to your garden either for the fall or next year. In actuality this year is the first year I grew it in my garden, and wow, was I impressed. I had read about it in some gardening magazines, like Mother Earth News, and various online gardening sources that raved about this ‘summer spinach’. Because so many people liked it I thought I’d give it a try.

If you remember way back when I talked about starting seeds, among those seeds was Swiss Chard. I am still harvesting chard from those seedlings. I planted the chard in two areas to try them out. One group in my raised bed and one in my planter barrel. Due to the soil mix the planter barrel was much more fertile than the raised bed, which is in desperate need of refreshing and fertilization. Because of this increased fertility, the plant production has been incredible. The plants themselves like fertile soils and soils that drain well. Not sand, just well draining soils. You can plant them directly two weeks after the last frost, or, like I did, in planters four to six weeks prior to the last frost. Water them well and if possible place them in an area where there is a little shade from the hot dry summer sun and it’ll grow and grow.

There a few great reasons for growing Swiss Chard. First, the color it will provide in your mostly green garden. Chard comes in a variety of colors, which include cream, yellow, orange, and red. They occur in the thicker stems and veins while the greens are deep glossy green. Chard really stands out among lettuces, spinach, and carrots! Another benefit to chard is how easy it is to grow. You can almost plant, walk away and then harvest later, it’s fantastic! If you have ever grown spinach, you’ll understand the benefit to chard. Spinach, for me at least, is a bit of a diva of the garden. It’s hard to germinate, very temperature intolerant and bolts as soon as you turn around. Popeye should have thought about that. But chard can be used as a replacement in recipes for spinach and grows so much nicer. Plus, chard is super high in vitamins A, C and K as well as as several minerals including iron. It’s a win-win. Plus you can keep harvesting off the same plant into winter and longer in warmer climates.

What to do with it?

Growing Swiss Chard is only half the fun, you’ll also likely want to eat it! As I said earlier you can replace chard for spinach in most recipes. The smaller leaves are great eaten raw in salads. As the get bigger they get a little bitter, which I like when mixed with lettuce. Leaves can get as big as my head, or a normally proportioned person’s thigh. Chard is great sautéed in white wine with a little garlic. Just start cooking the stem first to get them tender. Cooking the chard also makes them less bitter just like…spinach! Finally, if you have excess like I did, you can blanch the leaves and then freeze them. Blanching is really easy. Boil the leaves for three minutes, then remove them and place them into a bowl of ice water to halt the cooking the process. Place them in a freezer bag and toss them into the ice box. Use them later in stews, soups or some other great dish. Try them this fall and enjoy the flavor and colors.