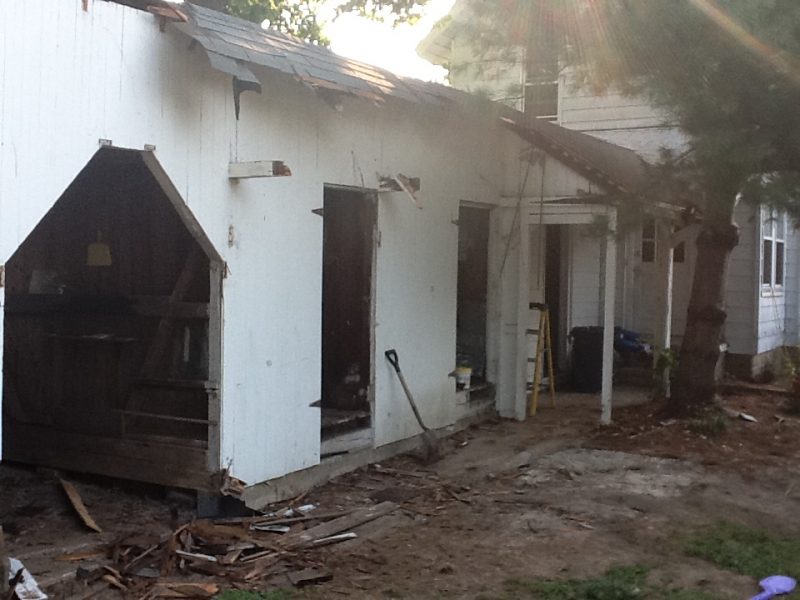 I decided to tear down a series of attached sheds during the hottest part of the heat wave this summer. Perhaps it was poor timing, but I lost about 25 pounds and now need new pants or a tighter belt; that’s looking for the silver lining! It was miserable, grubby work that I wouldn’t wish upon anyone. Since no one really wanted to help me, even if I had wished it wouldn’t have mattered. It was slow progress which would later be helped along with my dad’s small tractor to knock down and clean up the mess. To give you a mental image of what I had to do, imagine a semi-normal two story house with a small shed style roof which houses a small half-bath, back entry room, and pantry. Attached to this is a small room with a rotting roof followed by a long shed. That structure is then divided up into four individual sheds, each with a special purpose and each at different levels of decay.

The house itself was built in the early 30’s, and as far as we know, the sheds were built at the same time and then the small room was built which subsequently attached both the sheds and house together. The sheds themselves are a pretty common fixture in town, with many of the older homes having some slight variation of these sheds in their backyards (not that I look in the backyard for them). Prior to the house falling into disrepair they were very useful. One was a workshop, another a storage area for canning, another was a small lawn/garden shed and the very last one actually had a two hole out house in the back. Nothing in the last ten years has made me cherish indoor plumbing like seeing a rough cut oak bench with two 12″ holes cut for all the goodies to fall into the pit… Just the possibilities of splinters makes me shiver. Luckily the pit was covered over many years ago and neither my kids nor my dog can get to the ‘treasure’ that lies beneath.

Even though that treasure is buried for the rest of eternity, there were some hidden treasures that I was able to find. For starters, just admiring the antique craftsmanship was great. The bottom plate wasn’t a plate but a 6″x6″ with all the corners mitered perfectly. The corners had angles boards built into them to keep them square and true, at least until the termites got to them. The roof continued to display more craftsmanship; the leading edge had perfectly jointed cantilevered supports to allow for a nice covered breezeway from the back door to nearly the garage. Every joint was meticulously cut and fitted. Not bad for just sheds. There’s just no comparison to today’s sheds where there are as few joints as possible. Most are just butt joints with plywood mending plates stapled to them to hold them in place, and in some occasions the two adjoining pieces of lumber aren’t even touching.

Besides the craftsmanship, the reclaimed lumber was incredible. Much of the wood was rotted or termite damaged. However, I was able to keep some of the old redwood siding as well as some of the old wainscoting wall boards that managed to be left unscathed. There’s a list of projects I have for them, including new raised beds to expand my garden and some vintage-y shelves to showcase the rough cut lumber.

Just seeing the history and being able to tell my son that this is how people went potty a long time ago was really cool. Plus there was an old time, possibly hand-built table saw and a number of antique fasteners and posters. All of which became a bit of a time capsule. By far the coolest thing I found came when I tore down the last shed which housed the former workshop. The floor had some old rotting 1″ stock with an old decaying flooring layer on top. Sandwiched in between the two layers were newspapers, presumably used as a vapor barrier. The great thing was the newspapers were from the summer of 1936 and many of them were salvageable. There were pictures of King Edward, Mussolini, and tons of articles about the Spanish Civil War as well as lots of local stories from the depression era. Interestingly enough, some of these stories talked about concerns we’ve never heard of, like increased taxes, government misuse of money, farmers dealing with abnormally high temperatures and drought. It was really great to see history and also a little refreshing to see that even though there were lots of problems in the world at the time they still made it through, and here we still are today.

In the end, I never found that depression-era box of money hidden in the walls like I was hoping for. Instead, I did get to see a snapshot of how things were built, how people lived, what people worried about around the world, and how cheap things were back one hot, dry summer 66 years ago. Chances are if you have an old home your working on, you have a little treasure and a little history lurking behind that cracked plaster or under that old rough cut floor board too. If you have made any cool historical discoveries in your home, please share them with us in the comments section below.