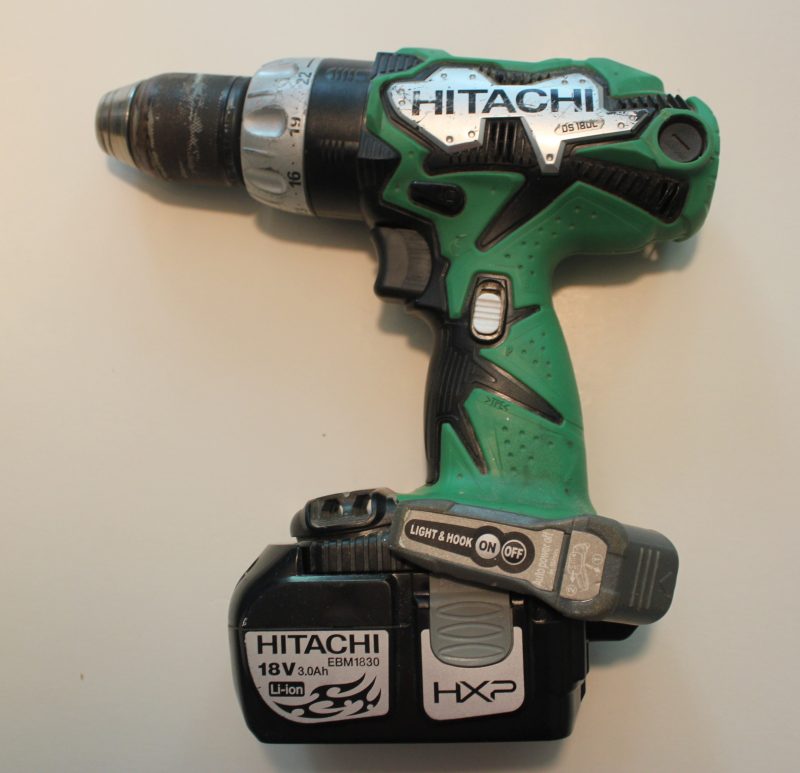 Let’s just jump right in and address the most obvious topic of concern with this drill: It does sort of have a Green Hornet Off His Meds/Statue of Liberty Sideways Crown vibe goin’ on. Undoubtedly, Hitachi has a highly skilled stable of graphic designers, who spent months agonizing over this design, and since red, yellow and blue were already taken (and pink, purple and mauve, whatever that is, were vetoed, thankfully), that left. . . GREEN! With Squiggly Black Lines! There’s more to this tool than, um, unique color and design though.

Garish though the design may be, it would be a mistake to relegate the DS18DL to the category of toy drills; this is a serious, stump-jumpin’, wrist-twistin’ beast of a drill. And I really need a good drill. I use my drill A LOT. I drive screws of various lengths into decking and framing members. I drill lots of holes through studs and joists to route wiring and plumbing, using large augur and spade bits. I use it to drill 2-1/8” holes in doors to install lock sets. To paraphrase Charlton Heston (or someone equally prestigious and wise), “you can have my drill when you pry my cold, dead, calloused fingers from around it.” So when my drill (along with several other pricey tools) vamoosed with some lowlife loser vermin thief just under two years ago, I wanted to replace it with an ass-kicker of a drill that would get the job done for a long time to come. After quite a bit of research, I decided on the DS18DL. The drill comes with a plastic carrying case, two 3.0Ah lithium-ion batteries, a quick charger, a detachable handle, and a double-sided driver bit. The gory details: Weight 4.6 pounds, auto spindle lock, ratcheting clutch, length 9.95”, ½” keyless chuck, no-load speed 0—200/400/900/1600 RPM, 23 clutch stages. The charger will accept 7.2—18V Li-Ion, NiMH, and NiCd batteries. The case has fairly spacious extra compartments built in, perfect for tossing in some extra bits, screws, Skittles, a change of underwear, and other necessities.

The HXP Li-Ion batteries take about 45 minutes to charge, and once charged, they last a LONG time. There is circuitry built into them to keep the voltage within optimal limits; if it detects a surge in voltage, or that the battery is drained down to the low end of its usefulness (around 12V), the circuitry shuts the battery down until the source of the surge is removed, or the battery is recharged. Hitachi claims that, due to the circuitry protection, the batteries will last through up to 1,500 charge cycles. HXP batteries are also backwards compatible with all Hitachi 18-volt DMR, DVF3, and DFL tools. The batteries come with a two year warranty; the drill itself is warranted for ten years.

A note on the charger: it sports both red and green indicator lights. So, green light, green drill, GO, right? Not so fast, Charlton. In Hitachiland, green lights do NOT mean GO, other than to indicate GO do something else for a while, your battery is overheated. A red light blinking every ½ second indicates an uncharged battery; it also indicates charging is complete. A SOLID red light indicates charging is taking place, and a flickering red light means you’ve got problems, bucko, either with the battery or the charger. Got all that?

The grip is made from a comfortable, cushiony (green!) material, and fits my hand perfectly. For a drill this size, it’s pretty light, and feels very well-balanced. The buttons to toggle between forward and reverse are located just above the trigger, and are very easy to operate (sometimes too easy; occasionally I’ll bump the button accidentally when working in a tight space.)

Inserting and removing bits in this drill is slick and simple; I LOVE the automatic spindle lock feature on the keyless chuck. Simply insert the bit, twist the chuck around it (only one hand needed) until it’s good and tight, and get drilling! Removal is the reverse: grab the chuck with one hand, back it off, remove the bit. Very fast and easy. 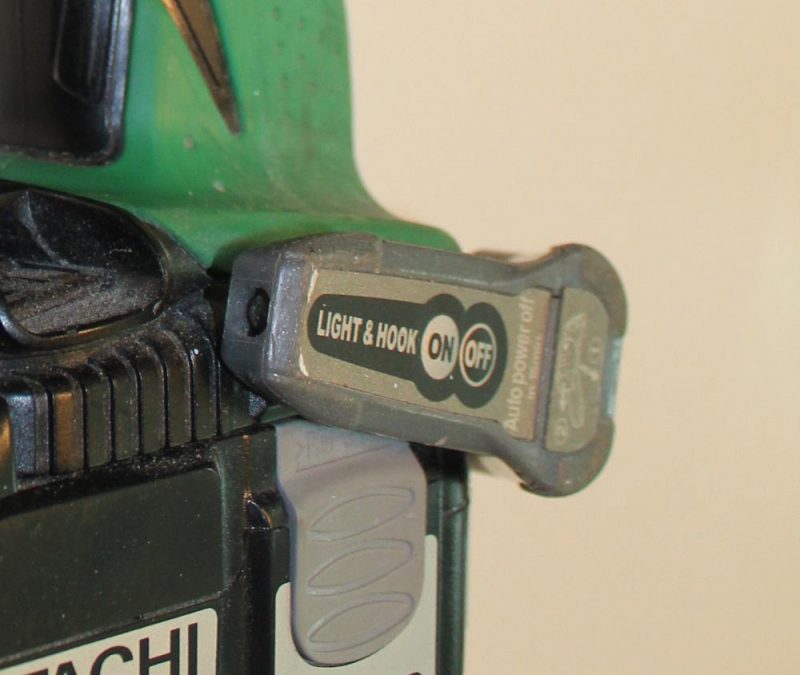 There’s a little light built into the attached 5-position belt clip. It shines a small pool of amber light when you turn on its separate switch, and it’s come in handy a couple of times, when I was contorted inside a cabinet or under a sink; a bright white LED light might be even more useful. It operates on separate AAAA batteries, which are still going strong two years on. 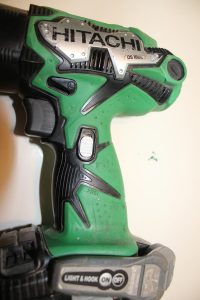 The removable handle slides on quickly, and can be used in any position. With many cordless drills, the handle is gratuitous; they don’t have enough torque to do much damage. Torque is what gives any drill the oomph it needs to drive screws and drill holes. The more torque, the better. This is about the torquiest drill out there; Toshiba claims maximum torque of 570 in/lbs. I don’t have any way to measure torque, other than to note that if the bit jams, this drill will take your hand for a quick, circular ride, until something solid stops it, usually in a painful fashion.

So, down to it: how does this drill perform after nearly two years of frequent use, with no maintenance whatsoever (aside from brushing off the BIG wood shavings before putting it away?), and a bit of abuse (having often been left in my truck overnight in freezing weather, and been dropped a time or two?) It feels every bit as powerful today as it did when I took it out of the box in August of 2010. I still get my wrist torqued around occasionally when a bit jams. There are no scary or strange noises, everything is still tight, and as a special bonus, the phosphorescent green has dulled somewhat (actually, it’s probably just muted by a light coating of grime). It still does everything I need it to; I have yet to encounter something this drill wouldn’t power through. Bottom line: If someone DID happen to pry this drill from my hand, I’d be ordering an identical replacement ASAP. Now THAT’S the sign of a beautiful drill!

from our friends at Amazon for around $272.