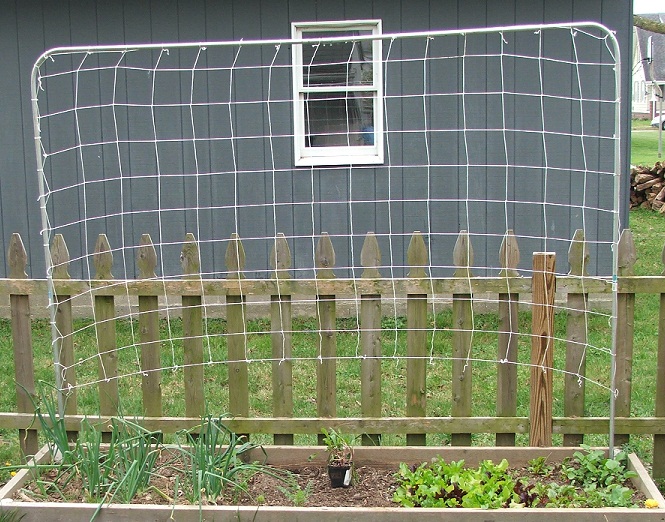 Man, I am in full garden mode and unfortunately you have to read about it here, here and, well, here! I’ve already harvested several rounds of leaf lettuce, arugula, and radishes, and I am close to cutting some swiss chard (Check out an update on the barrel garden!). It’s going pretty fantastico. As the warmer months were closing in on us, I started some cucumber plants in my seed flats, and pole beans sewn directly.  Since I’m using raised beds to grow my vegetables I need to be smart about space. Instead of letting my cucumber run across the ground like more conventional gardeners might, I’m going up. Hence, the need for a trellis. However, instead of typical trellises made from wire, pipe or wooden slats, I opted for something a little different; trellis netting.

What Is Trellis Netting?

Trellis netting is a lightweight net made up of 5″ x 5″ squares. You can purchase it in a few different sizes but ultimately it stretches and gets tied around some form of frame to allow vining plants to grow vertically instead of sprawling everywhere. I’d like to claim this as my own but alas I’ve seen it a couple places including the video below where my man is using a net to grow pumpkins. He and many others credit the small gardening guru Mel Bartholomew, author of Square Foot Gardening, for the design. (The trellis netting content kicks off at at 3:42 in the video):

What the trellis net lacks in aesthetics, it makes up for in simplicity. Now, as you may note in the video below, I altered my design slightly because, well, I’m cheap (as you may have already gathered from previous articles). The original design calls for conduit elbows but those things are pricey. I just bent 90 degree angles in some straight conduit using a pipe bender.

Ingredients for a Trellis Net

So here’s what you’ll need (for one trellis):

How To Build a Trellis with Netting

1. Drive the rebar two feet into the ground where you want to put your trellis. If you’re using a raised bed, I think you can figure out where to put the rebar. (Hint: I put them in the corners.)

2. Measure and mark the desired height for your trellis on the conduit. I made one 5′ and one 6′ for different plants.

3. Bend the conduit into a 90 degree angle. I tend to over bend first and then ease it back to 90 degrees – it seems to take a little of the guess work out of the bending. Also if you’re new to bending, note that there is a designated notch for the start of the bend near the front of the bender head. It’s very helpful in lining up your bends.

4. Place both pieces of conduit onto the rebar and line up the pieces for connection. Depending on the size of the raised bed you’ll probably need to cut it down a little. I know it probably would be easier and more technical to measure and then cut, but please, who has time to do nonsense steps like that.

5. After cutting the conduit to fit, connect it using the coupling. You may need to adjust the bends here to make sure they fit nicely together.

6. Remove the frame from the rebar and lay on the ground. Open your trellis on the ground and unwrap it. It will look like a jumbled mess of spaghetti, but surprisingly enough every one I’ve opened unfurls itself very nicely.

7. At the factory edge of the trellis netting there is a length of nylon string about 2″ in length on all the edges for tying. Start in the corner of your bend and work down and across as you tie it to the frame. Be sure to stretch it a little as you tie it on.

8. When you get to the other end of the frame you’ll need to cut the trellis netting. Cut it in the middle of a square to be able to tie it to the frame and to possibly use the remaining netting later and tie it on.

9. Optionally, if you’re not a boy scout or you’re incapable of tying your shoes properly, use the zip ties in the center of each square all the way around for added protection.

10. Place the new frame on the rebar and wait for those vining plants to make their way up there. Keep in mind that you’ll need to train them as they grow.

While there is no weight limit noted on the packaging, I’ve heard that it can support 70 lbs plus. The added bonus of a trellis net is that in a few months you’ll have a wall of green that can act as a privacy screen, and when the plants are completely done you can easily remove the nets for simple storage or leave them there for an early crop of snow peas or something. And in case you’re wondering about cost – the whole shebang cost me less than $20 bucks out of pocket, and less than an hour in time.  I think that fits the definition of a perfect DIY project!