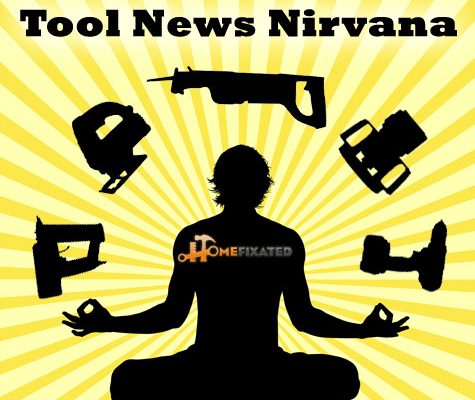 We’ve got all sorts of new tool and material goodies for you to sink your teeth into, so put down those turkey sandwich leftovers and get ready to fill up with some of the latest and greatest tools in this “Leftover” edition of New Nirvana. Our fine sponsors at Rockler show us their new reclaimed lumber lineup, Bosch brings a new 10-inch axial glide miter saw as well as a new brushless tool lineup to the table, Senco stops over with their new FramePRO framing nailer, Festool announces a rare recall on one of their track saws and Rockwell wants to rock your garage. So let another notch out of the old belt, throw out that Thanksgiving Day cranberry sauce that nobody’s going to eat and slide up to the table for this gut busting edition of News Nirvana.

You can keep on truckin’ with the introduction of Rockler Tool and Hardware’s Reclaimed Route 66 Lumber. Sourced directly from the decks of tractor trailer trucks, this mix of red and white oak is sturdy and stout, but filled with character than from years of riding down the highway in the open elements. Boards are 1-1/4”x12”x6’ and run $5.99 per board foot in stores. Shop online and get two planks for $89.95 and create a one-of-a-kind work of art with this amazingly beautiful reclaimed lumber. It might even beat reclaiming the leftover turkey for a sandwich.

After Bosch released its 12-inch glide saw a while back, it wasn’t too long before professionals wanted the same powerful miter saw but in a smaller, more portable package. And Bosch delivered with the introduction of the 10-inch glide saw. It features the same Axial-Glide System that the 12-inch version offers for creating smooth and precise cuts at all angles. This smaller sibling increases work space, makes the tool more compact and reduces weight for easy mobility, unlike grandpa Joe after a second helping of pumpkin pie.

And, it’s not just miter saws Bosch is breaking out, this February, Bosch plans to expand its brushless tool lineup with a new cordless drill/driver and impact wrench. Featuring their new EC brushless motors, these tools are designed to deliver increased runtime and last twice as long as conventional tool motors featuring brushes. Take a look at the Bosch CM10GD 10-inch Dual Bevel Glide Miter Saw  for yourself and see what all the fuss is about at BoschTools.com.

Well known for their nail gun lineup, Senco’s new FramePRO framing nailer is more than just the average framing nail gun. Weighing just under eight pounds and measuring less than 12-inches tall, it’s their most compact framing nailer to date. But just because it’s small, doesn’t mean it doesn’t pack a punch. It delivers 780 inch-pounds of impact energy to the nail at 100 psi, allowing you to fasten 2-3 ¼” nails into the hardest yellow pine or engineered lumber with ease. It also features a retractable rafter hanger that’s perfect for any framer navigating the particulars of a truss layout. Pick one up at Lowe’s soon for just under $200 or visit Senco.com to find out more about the FramePRO 325XP.

Starting last month and running until the end of January, Rockwell Tools kicks off the “Rock your Garage” sweepstakes in celebration of the popular television series Counting Cars. Enter at the end display found at any Lowe’s store for a chance to win the grand prize – a restored hot rod, a trip for two to Las Vegas to visit Count’s Kustoms, a complete set of Rockwell tools and a $500 gif card from Lowe’s. That sure beats the heck out of grandma’s leftover turkey stuffing. You can also enter online at the History Channel’s website.

We talked about the TS 55 Track Saw in an earlier News Nirvana and unfortunately, it’s been recalled due to safety concerns over the blade remaining exposed from the housing. Since Festool isn’t looking to pay for new fingers, it’s decided to recall the TS 55 REQ. Festool asks that you discontinue use of this particular track saw immediately, and complete this online form. Once they have your info, Festool can repair the old tool, exchange your old TS 55 REQ for the new and improved TS 75 at no additional cost, or if you’re unsatisfied with the tool, Festool will refund the purchase price. It’s just too bad they couldn’t recall your aunt’s Thanksgiving Day mystery vegetable casserole as well.