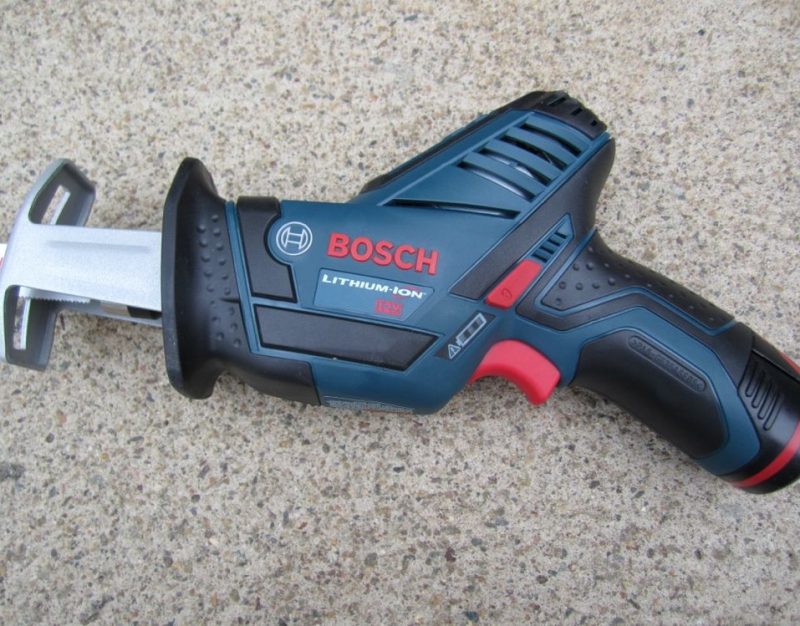 I’ve been known to use my full size reciprocating saw for all kinds of tasks, including some slightly unconventional. Armed with a toothy long blade, I’ve made short work of trimming shrubs, trees and large plants. Let’s face it though, a reciprocating saw is not exactly a pocket tool. I’ve wielded them from a ladder one-handed (not recommended), and I think my forearms needed to be about two to three times as big as they currently are. For some smaller tasks, like cutting small pipes, hard to access nails, etc. the reciprocating saw is not only overkill, but it’s often impractical too. What’s the alternative? Usually the hacksaw. I have a confession to make; I’ve never really liked hacksaws. For what they cut, they’re big, cumbersome, hard to keep on-track, and blade changes are a pain. If you’ve ever had a task where a hacksaw just doesn’t do enough and a recip saw does too much, you’ll want to check out the Bosch 12v Mini Reciprocating Saw.

Last year, Jay over at CopTool.com pointed out the striking similarity between the Bosch and Milwaukee 12v mini recip saws. Since I might have detected a hint of tension between the companies on this front, I’m going to diplomatically avoid further comment and tip-toe onward with this review. If you’re a Milwaukee Tool loyalist, then rest easy a very comparable tool is available to you, and if you’re more a Bosch fan, then they have you covered too.

As fate would have it, my friend Ryan gave me a call shortly after I received the Bosch 12v Max Mini Reciprocating Saw from Bosch. He was facing a dilemma and needed advice. Ryan is an avid homebrewer, and he was working on a custom copper rig to enhance his brewing magic. The piece required dozens of cuts in copper pipe and Ryan wasn’t enthused about his progress with a hack saw or a Dremel rotary tool. So I invited Ryan over to give the new Bosch 12v Mini Recip saw a go. It’s also important to note it’s never a bad idea to provide a favor to someone that’s a skilled homebrewer. Homebrew karma can be very full-bodied, with mild hopiness, a hint of malt and a smooth finish. 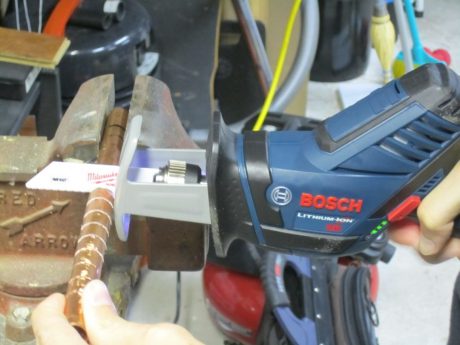 I carefully loaded each section of copper pipe into my vise, mindful of how soft copper is. It was then time to fire up the mini reciprocating saw and see how it handled the metal cuts. It turned out my biggest concern was not sawing right through the pipe (the goal here was to create just a narrow slit in the top half of the pipes only).Precision cuts were no sweat

With a full size reciprocating saw I would have no doubt accidentally cut right through. The stroke length, speed and power of a full size recip just wouldn’t have allowed me the precision I could get with this more precise tool. Amazingly, I managed to do all the cuts without over-cutting the material. The Bosch 12v Max Mini Reciprocating saw performed impressively.

Cut after cut went remarkably smoothly and without the blade-binding, jerky, sweaty work of manually cutting with a hacksaw. What would have taken a small eternity with a hacksaw or Dremel was done in about ten minutes with the Bosch 12v Max mini recip saw. Somehow I thought the Bosch engineers over in Germany would be happy to know their tool was being put to such a noble use: beer brewing. Here’s the finished product, ready for brewing. 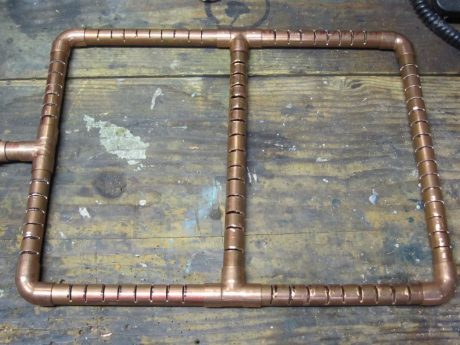 Despite surprising power, the Bosch mini reciprocating saw is small and responsive. It’s great for overhead work since you can easily one-hand it. Having one hand on the saw also gives you the ability to keep your other hand stabilizing the piece you’re cutting. Like many of the 12v Max tools, Bosch thoughtfully included an onboard fuel gauge, an LED light to help shed light on the cutting area, and a trigger lock. Speaking of trigger lock, before anyone calls Child Protective Services, my daughter and I had a thorough discussion about power tool safety before the photo-shoot seen above (plus I secretly engaged the trigger lock in case a sudden burst of premature teenage rebellion kicked in). 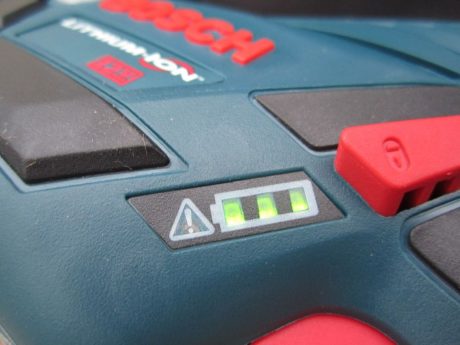 All in all, the Bosch 12v Max Mini Reciprocating Saw is an immensely handy tool, even if you’re not into homebrewing beer. If you ever find yourself cursing your hacksaw, or, if you ever feel like your full size reciprocating saw is like squirrel-hunting with a tank, you owe it to yourself to grab one of these. You can find the
Bosch PS60-2A 12V Max Cordless Lithium-Ion Pocket Reciprocating Saw

– minus the bag, charger and batteries, for around $70. Happy brewing!