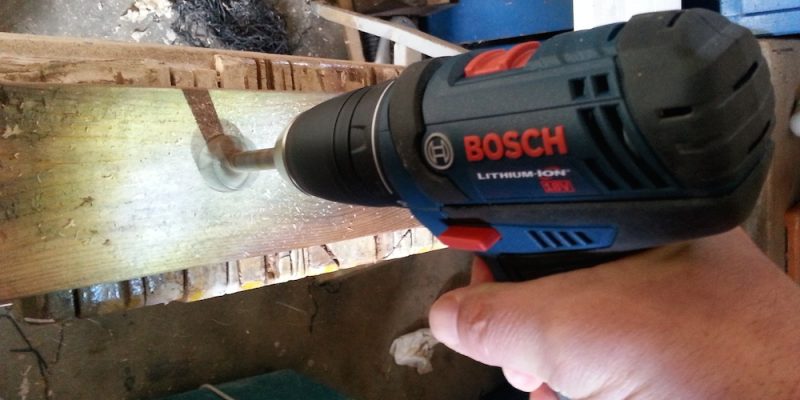 Recently, I’ve had Bosch on the brain. Last week, while suffering through some sleepless nights due to a painful inner-ear infection, I sat up binge-watching a new detective series called “Bosch.” Flipping channels, the title caught my eye solely because of my love of Bosch power tools, but the story of Detective Hieronymus “Harry” Bosch and his dogged hunt for a serial killer turned out to be pretty engaging too. Bosch is a no-nonsense cop who never compromises his values and always gets the job done. Yup, just like a Bosch power tool! Maybe just like the Bosch DDB181 18v Compact Drill Driver Bosch (the tool company, not the detective) sent us to review.

Like Los Angeles Homicide Detective Harry Bosch, the new DDB181 (I call my new drill “Hieronymus”) isn’t flashy. It’s construction is incredibly sturdy, like Bosch’s black Crown Vic Police interceptor, but it is small and German designed, like the Heckler & Koch P7 9mm semiautomatic pistol that Harry Bosch carries as a backup. And like the H&K P7, the new Bosch DDB181 Compact Drill Driver packs a whole lot of firepower in a small package.

Like the TV character Harry Bosch, the Bosch DDB181 compact cordless drill is new, but based on years of refinement. The TV character is based on the protagonist of 17 best-selling mystery novels by author Michael Connelly. The drill, on the other hand, is the latest in a long line of top quality cordless drills going back to the 1980s. If Harry Bosch had a cordless drill in the utility closet of his Hollywood Hills bachelor pad, I think it would be a DDB181!

The specs of the new Bosch compact drill/driver are everything you would expect from a pro grade cordless. 18 Volt power, 1/2″ Chuck, two speed settings (0-400 RPM/1,300 RPM,) 350 in lb. of max torque, LED light and sturdy, optional belt clip. Where it excels is not in what it has as much as what it doesn’t have. It doesn’t have the size of standard 18V drills. It weights only 3 lb. and the length is only 7.1″ length. That is an entire pound lighter than my 4 year old Bosch “compact” 1/2” cordless drill!

There are just so many reasons to like this new drill. It has nearly the size and weight of a 12V drill with the power of 18 volts. For an electrician, plumber or HVAC tech or cabinet installer who works a lot over their head and in tight spaces, this drill is a dream. I have to say that in 99% of day to day tasks, this is plenty of drill.

One interesting note: Bosch has moved the light from over the trigger to below the grip. I haven’t passed judgement on this move yet. I could see it as a possible improvement, as the light is less likely to be blocked by the chuck, but I could see it glaring in tight spaces. I’ll be interested to see if they keep that LED light position in future models.

If you are a fan of police procedurals, check out the TV show Bosch on Amazon Prime, or in the Mystery section of the public library. If you are a fan of well-designed, powerful and lightweight power tools, look for the distinctive red “BOSCH” letters on the side of the well-built tool. The BOSCH 18V Litheon 1/2″ Compact Drill Driver W/ 2 Slimpack Batteries DDB181-02 is on sale with our sponsor Ohio Power Tool for just $120!