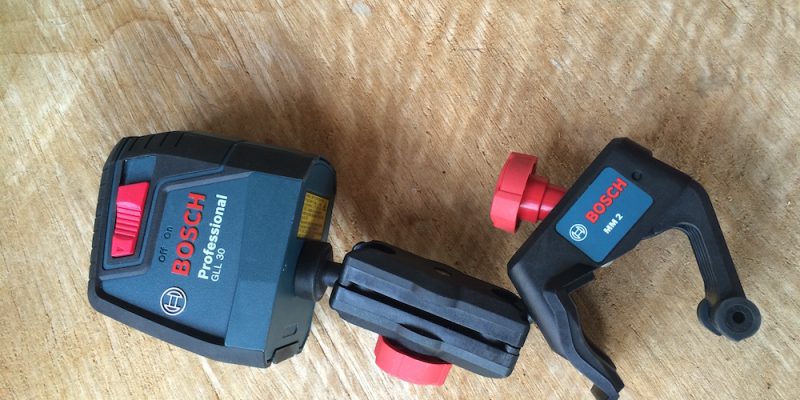 In a perfect world, everything in your house would be plumb, level and square. Want to install a chair rail? Just measure up from two points and snap a line. Got some cabinets to install? Just push ‘em into position and screw them in – easy peasy! In the real world, that scenario is pretty rare – I very seldom see it, even in new construction. If you’re looking for a fast, easy way to make sure your work is on the level, and plumb awesome, take a look at the Bosch GLL 30 self-leveling Cross Line Laser.

According to Bosch, the Bosch GLL 30 is designed to handle a wide variety of light to medium duties. That said, they packed a pretty good variety of features into the unit. The laser projects both a vertical plumb line and a horizontal level line. It’s self-leveling within 4°, simple to operate, and comes with a threaded tripod mount and an adjustable clamp. Here are the specs and a quick video from Bosch:

• Cross-line mode – projects two very bright lines that are perfectly level and plumb
• MM 2 Flexible Mounting Device – clamps to multiple surfaces and provides microfine height adjustment
• Smart Pendulum System – self-levels and indicates out-of-level condition
• Secure transport – pendulum locks when switched off
• Manual mode – tilt the laser to use the lines at any angle
• Ergonomic, compact and lightweight – easy to use, easy to store
• Features 1/4 In.-20 tripod thread – for use with MM 2 mount, BM 3 Magnetic Mounting Bracket or tripod
• Versatile clamp – stable grip on thin and thick surfaces (from 1/2 In. to 2-1/4 In. thick)
• Accuracy +/- 5/16” @ 30’
• Weighs 0.5 lb.

Lasering In On The Bosch GLL 30

No lengthy training period is needed to operate the Bosch GLL 30. When you’re ready to use it, push the switch to the “ON” position. Finished? Return it to the “OFF” position. Ready for the quiz?

There is a threaded hole in the bottom of the Bosch GLL 30. The thread accepts a standard tripod mounting screw, so if you have a photographer’s tripod, you’re all set. Bosch also included a handy MM2 mounting bracket. The bracket also threads into the mounting hole, and has a flexible clamp that can latch onto any surface between ½” and 2-¼” thick. The bracket swivels into a variety of positions, and once you snug up the clamp, it holds its position well.

When you turn the Bosch GLL 30 on, it projects a level line, with a plumb line intersecting its center. When you get the projected lines close to being plumb and level, they’ll finish the job for you. The tool is self-leveling within roughly 4°. The lines will flash until you get them level and plumb, and then become solid. When the laser is turned off, the pendulum locks, to prevent damage during transport.

The Bosch GLL 30 Goes To The Country

One of my ongoing projects is the total renovation of an old farmhouse we bought. We are in the final phase of the kitchen portion of the do-over, much to my wife’s delight. (Apparently the novelty of doing dishes in the second-floor bathtub wore off a while ago). The walls above where the kitchen cabinets were going were pretty rough, and I also needed a space to run some wiring and install some lighting. I decided to build a bulkhead on the upper portion of the wall, and the Bosch GLL 30 showed up just in time to help us establish a level line to locate the bottom of the bulkhead.

The bottom of the bulkhead needed to be about 85” off the floor, so that’s where we needed to project a line. Since the Bosch GLL 30 needs to be within about 4° of level, that meant the tool had to be around 85” off the floor. I had the laser mounted on my camera tripod, but it can’t reach anywhere near that high. Ever resourceful, we waited until my wife was out, and set the tripod up on her brand new stove top.

Dialing in the exact height can be a bit challenging. There is no vertical adjustment on the Bosch GLL 30, so you have to employ the “best guess” strategy to get the laser as close to your desired height as possible. Once it’s there, you can fine tune the setting by tilting the level up or down a bit – just stay within the 4° limit. A rack-and-pinion setup would make it a lot easier to dial in, especially since the line takes a couple of seconds to settle down every time the unit is moved. Not a huge deal.

We got the laser set up about 12’ back from the target wall. The line was pretty easy to see, even though it was slightly dimmer toward the edges. We marked the ends, and snapped a line.

The specs for the Bosch GLL 30 say the accuracy is +/- 5/16” at 30’. I wanted to make sure the bulkhead was perfectly level, since the upper cabinets would butt right up to it, so I checked the results with a digital level. The verdict? Our line was dead-on level.

Before building the bulkhead, I also wanted to add several outlets above the U-shaped countertop height. Five of these were to be installed in “old-work” boxes, requiring me to cut into the existing plaster walls. The Bosch GLL 30 made it easy to make sure all the boxes were cut in at the same height. And we didn’t even need the stove top!

The instruction booklet says the Bosch GLL 30 is intended for indoor use. Always one to live on the edge, as long as it’s level, I grabbed the laser and headed to the great outdoors. On a sunny day, I couldn’t see the line when the laser was aimed at a wall of light-grey siding from about 20’ away. I tried again later when the sun was setting, and the wall was in shadow – much better. If you want to flaunt the rules and use the Bosch GLL 30 outdoors, your best bet would be during the morning or evening twilight, or on a very overcast day.

Can The Bosch GLL 30 Earn A Place In Your Tool Chest?

So how else can the Bosch GLL 30 make itself useful around the house or shop? Here are a few ideas to fire the imagination. Got a bunch of pictures to hang, and want them to have that perfectly-aligned gallery look? The Bosch GLL 30 will help you nail it. And the vertical line will even let you line up columns of pictures, in case you have a LOT of art.

You can even get them perfectly aligned going up a staircase. Previous versions of the Bosch GLL 30 apparently had a switch to lock the lines into position. The updated version doesn’t have that switch, but it can still be used at an angle. Get the laser mounted and clamped, and tilt it to project the line on the wall, following the angle of the stairway. The laser wants you to know it is unhappy about being outside its 4° boundary, and it will demonstrate its displeasure by blinking off for a second about every three seconds. Just ignore the blinking, and it works fine to get your family tree perfectly rooted on the wall.

There are plenty of other ways to keep the Bosch GLL 30 busy. Got shelves to hang? Use the laser to line up the brackets. The laser also makes a great time saver for many other DIY projects, including tiling a wall, installing a chair rail, hanging cabinets, or installing some wainscoting to give the joint a little class. It would also be very handy to lay out level lines in framing to mark for plumbing and electrical runs. We’ll be using it again at the farm to install a wallpaper border in the living room.

If you’re a contractor, you’re probably looking for a laser with more features and functionality. All of which comes with a higher price tag, naturally. The average homeowner or DIYer’s requirements are likely to be much less demanding. It’s also tougher to justify investing in a high-end tool for occasional use, especially if a significant other is monitoring the budget.

The Bosch GLL 30 is likely to do everything the occasional user needs, at a reasonable price point. It doesn’t have all the bells and whistles, but it’s easy to use, accurate, and inexpensive. Bosch offers a 30-day money-back guarantee, so you can see if the Bosch GLL 30 is up to your “level” of expectation. The tool also comes with a one-year warranty, which Bosch will double if you register it. 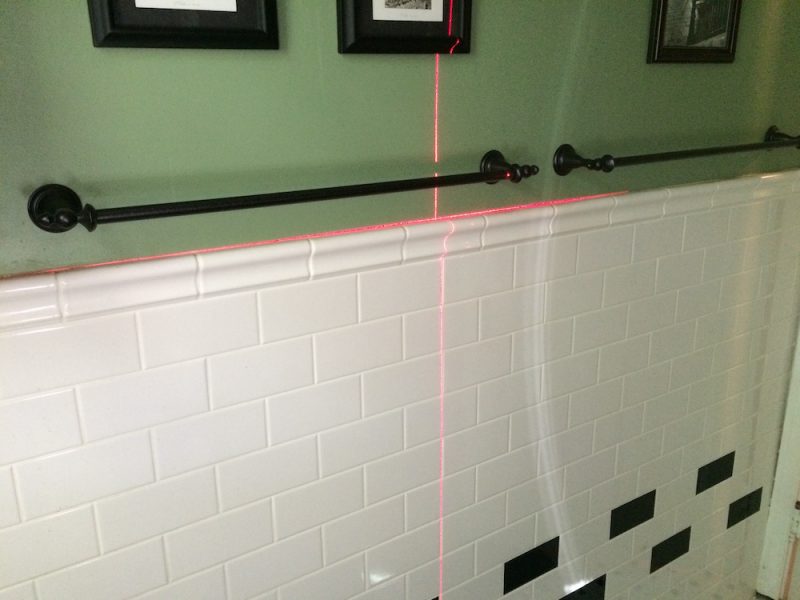 Buy from Home Fixated sponsor Ohio Power Tool for around $80: