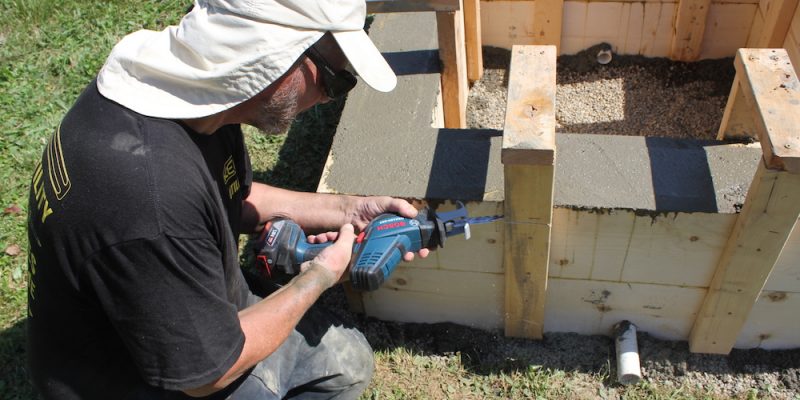 If you’ve ever used a reciprocating saw, it probably didn’t take long to earn a permanent position in your tool collection. Recip saws can make quick work of lots of tricky or miserable jobs. With the right blade, you can cut pretty much anything, including steel, nail-embedded wood, and less traditional items, which we shall explore shortly. You generally pay a price for this power and ability, though, in terms of weight and size. There are smaller options available, and we recently received a Bosch GSA18V-083B Compact Reciprocating Saw, which we single-handedly put through its paces.

Most reciprocating saws are two-handed affairs. There’s generally a D-handle in the rear, and your other hand supports the underside of the tool near the front. The compact Bosch GSA18V-083B reciprocating saw has the handle incorporated into the body. You grab it from above, making it easy to operate single-handedly.

It’s comfortable, well-balanced, and light enough that you can likely accomplish your slicing and dicing without having your hand cramp up. Don’t underestimate the Bosch just because it’s small, though; the little blue saw is a serious tool, with a good bit of power. Here’s the official lowdown from Bosch:

The Bosch GSA18V-083B Gets Squashed

I brought the Bosch GSA18V-083B to our small farm to put it to work. My wife actually came up with its first challenge. We have several squash plants, which are in the process of taking over the world. My wife wanted several of them cut from the vine, since the groundhogs were gnawing their way through our crop. Harvesting them can be a challenge – the stems are spiny, difficult to get to, and can be over 2” thick. We have a little garden saw, but it’s no fun; hell – it doesn’t even have a battery!

I wiggled my way through the vines, and got the blade into position. The little Bosch GSA18V-083B was easy to maneuver, and easy to control, even with one hand. I squeezed the trigger, and a couple of seconds later the squash was liberated, and it was on to the next. Using a recip saw to harvest squash might be a bit of overkill, but it sure makes the task fast and fun! Take that, groundhog swine!

With the squash safely out of groundhog reach, it was time to give the Bosch GSA18V-083B a more challenging task. I had just finished building a fire pit, and had to remove the 2X10” forms from the concrete. I had used the Bosch without a blade the day before, when we were pouring the concrete into the forms, to vibrate them a bit and help settle the concrete.

Removing the outer forms was simple: Back out a few screws, and pry them off. The inner forms were a bit more challenging; they needed to be cut and pried out. I chucked up a long wood-cutting blade, and went at it. I had to cut through six of the eight 2X10s to get the forms out, and the little Bosch had no trouble.

Because I was using a long blade, and going through a lot of material, I used two hands to operate the saw. It was easy to hold and maneuver, and had plenty of power to get through everything. The variable-speed trigger operated smoothly, and gave me great control over the saw’s speed, making it simple to ease into the cuts, and to stop before gouging the concrete.

For my final test, I inserted the metal (and squash) cutting blade, and grabbed a piece of ½” black steel pipe. Shortly after starting the cut, I dripped a little oil into the cut to help lubricate the blade. The Bosch GSA18V-083B powered steadily through, without bogging down at all.

The smaller size of the Bosch GSA18V-083B makes it a treat to use in many situations. It can get into spaces a full-size recip saw just won’t fit. If you’re cutting overhead, it’s a lot less weight to keep hoisted. Its smaller size and light weight make it easy to use and control single-handedly, so it’s great for those jobs where you’re cutting something while trying to hang onto a ladder.

A feature I found useful is the trigger lockout, which ensures the blade doesn’t start moving if something bumps the trigger while you’re transporting the tool. Speaking of the blade, the stroke length is .83”, vs. a typical stroke of 1.125”, so you lose about 3/10” per stroke. This makes cutting a little slower, but unless you’re using it all day long, it won’t really slow you down much.

The Bosch GSA18V-083B also has an LED light near the front. The light might help you find what you’re cutting, and let you get the blade where you want to start. Once you start cutting, though, the LED shines only where the blade is, not where it’s going, making it somewhat less useful. My recommendation: When using a tool with a sharp, rapidly-moving blade sticking out the front of it, make sure your work area is well lit.

The tool seems very solidly constructed, and the rubberized grip has a good feel to it. There is very little vibration, and the tool-free blade change setup makes it fast and easy to swap out blades. Turning the locking collar can be a little awkward, especially for someone with big fat fingers (me), but I was still able to swap out blades in a matter of a few seconds.

When I first saw the Bosch GSA18V-083B compact recip saw, I was skeptical that it would have enough power to be very useful. I was wrong – the little saw did a great job on everything I tried it on. The Bosch would make an excellent addition to the tool crib of any carpenter, electrician, plumber or HVAC installer (just don’t cut through all the joists!), or DIYer. For someone who doesn’t regularly do lots of demo work, it could easily serve as the only reciprocating saw you need.

The Bosch GSA18V-083B comes with a one-year warranty, which Bosch will extend to three years if you register the tool. It also has a 30-day money-back guarantee. The saw will work with any Bosch 18V Li-Ion battery, but it is sold as a bare tool. If you don’t already have a battery and charger, the best way to get them is in a kit, like the Bosch SKC181-101. That will make the Bosch GSA18V-083B much more useful. Try one out, and see what YOU can accomplish single-handedly. 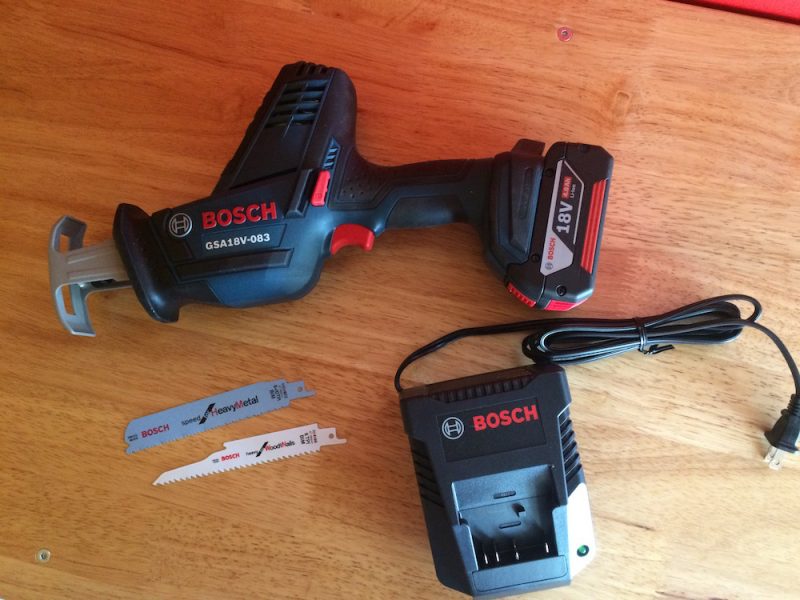