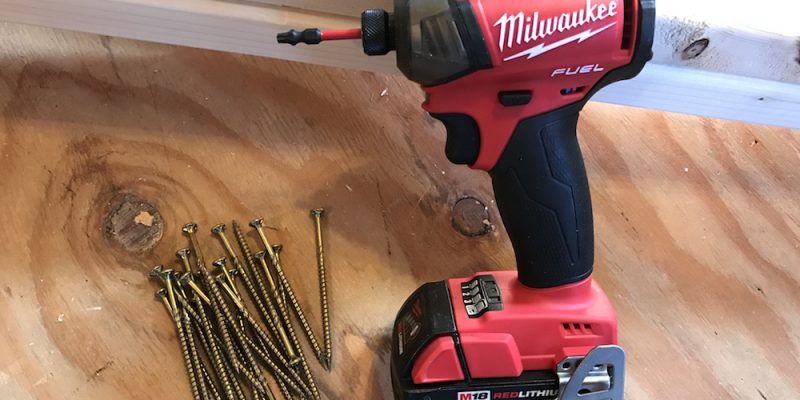 One of the most useful tools I own is my impact driver. This amazing little tool can drive a fair-sized lag screw through several inches of wood. What’s so amazing about that? It does it without wrenching my wrist around. Impact drivers do a great job of putting the torque to work on the fastener, rather than into your arm. The downside? They’re LOUD. As in hearing-protection-required loud. A new breed of drivers, using quieter hydraulics rather than the hammer and anvil method, is on the rise. Milwaukee invested their usual time, energy and talent into developing their version, the Milwaukee Surge Hydraulic Driver. HomeFixated received one of the first samples to evaluate – read on to see how it might impact you!

According to Milwaukee, the Surge is in a class of its own. “The ‘oil-impulse’ options available today ask the user to choose between some pretty significant trade-offs. Some options focus on speed and torque at the expense of size and weight, while others focus on ergonomics at the expense of performance. With the new M18 FUEL™ SURGE™ ¼” Hex Hydraulic Driver users will experience the best of both worlds- all the holistic benefits of an oil impulse mechanism without the extreme trade-offs.”

In its quest to make a kinder, gentler fastening tool, Milwaukee came up with the Fluid-Drive™ Hydraulic Powertrain. According to the specs, this technology allows the Milwaukee Surge Hydraulic Driver to operate 50% quieter, and with three times less vibration, than a standard impact driver. It’s also lightweight, comfortable to use, and very compact.

To maximize the efficiency of the Milwaukee Surge Hydraulic Driver, Milwaukee employed its go-to combo. The powertrain makes use of an efficient Powerstate brushless motor, and the juice comes from an M18 Redlithium battery. The brains of the outfit is Milwaukee’s Redlink Plus technology, which optimizes the tool’s performance, while also providing overload protection. Here are the specs from Milwaukee:

Don’t Let The Numbers Get you Torqued

If you use an impact driver, or you’ve been researching them, one of the specs above probably jumped out at you: The torque. The Milwaukee Surge Hydraulic Driver packs 450 in/lbs. of torque, vs. the much higher torque specs on a standard impact driver (1,600 for the Milwaukee 2653-20, for example). Therefore, the Surge must be an underpowered wussy tool, right? Wrong – in this case, kinder and gentler doesn’t mean underpowered.

Here’s the deal: The advertised torque specs for standard impact drivers are peak levels. They generate a brief period of high torque, with IPM (impacts per minute) averaging around 3,000. The Milwaukee Surge reaches its peak torque faster and maintains it longer, and at a much faster IPM rate – 4,000 IPM. According to Milwaukee, the 450 in/lbs. generated by the Surge deliver driving speed equal to or faster than that of standard impact drivers, when working with small and medium-diameter fasteners.

Which brings up a good point: Impact drivers, and hydraulic drivers like the surge, are NOT impact wrenches. This isn’t the tool to reach for when you want to remove the rusted lug nuts from your dually, or drive 8”-long ½” lag screws through an oak beam. They’re intended to drive deck screws, attach ledger boards, fasten electrical boxes or galvanized ducts, fasten cabinets together, and similar light to medium-duty jobs. And they do a kick-ass job of it. I guarantee you, if your expectations are realistic, a hydraulic driver or impact driver will become one of your favorite tools.

The Milwaukee Surge Hydraulic Driver Does Some Overhead Work

The Milwaukee Surge Hydraulic Driver happened to arrive the day before I began a ceiling repair job. The original ceiling had been built in a pretty rinky-dink fashion; the 12’ X 17’ ceiling was made up of 53 scraps of sheet rock. As if that wasn’t bad enough, it was 3/8” thick sheet rock, spanning 24” on center trusses. Gravity had worked its magic, and the ceiling was sagging badly in several places. A layer of acoustic tile had been stapled over the whole thing, but the combined effects of gravity, water damage, and the removal of a closet all meant it was time for a do-over.

I stripped off the tiles, and pulled out the 43,000 staples that had been securing (most) of them. I got some 12’ 2X4s, which I tacked into place 16” on center, running perpendicular to the joists. I put one nail in near the end of each 2X4, just enough to hold them up until I could get them screwed in. For that job, I got 4” #10 construction-grade screws; I’d like the new ceiling to stay in place.

The screws have a T25 head, so I grabbed a Milwaukee double-ended impact duty bit. The double-ended bit is very handy, with a #2 Phillips bit on one end and a T25 bit on the other. Inserting the bit into the Milwaukee Surge Hydraulic Driver is as simple as it gets – just push it into the chuck. To remove it, pull outward on the collar. I slid on a battery, and pushed the Mode button to setting 3, which is the fastest setting (naturally!).

One of the things I love about impact drivers in general is how compact and lightweight they are. The Milwaukee Surge Hydraulic Driver is no exception; at 2.1 lbs. (without the battery), it’s very light and comfortable to hold. I grabbed a handful of screws, assumed the position, and started banging in screws.

The first thing I noticed is that the tool starts impacting almost immediately. With a standard impact driver, it generally runs the fastener in about 2/3 of the way, and when there’s enough resistance, the noisemaking begins. I spoke with Cole Conrad, Group Product Manager for Milwaukee Tool. He explained that, unlike a standard impact driver, the Milwaukee Surge Hydraulic Driver doesn’t use a “hammer and anvil” technique to move the bit. Instead, it relies on compression and expansion of hydraulic fluid to do the job, and that’s what keeps the bit spinning. Although it’s impacting almost the entire time, the noise level is much less than with a standard impact driver.

After running several dozen 4” screws into the nailers, I swapped out the Milwaukee Surge Hydraulic Driver for the standard Milwaukee impact driver (2653-20). The impact driver also ran the screws right in with no trouble at all. When it started impacting, it was noticeably louder than the Surge had been. Here’s a quick video of the Surge in action:

I also noticed a difference in the amount of perceived vibration; the hydraulic fluid in the Surge definitely helps to dampen vibration, vs. the standard impact driver. The absence of metal-on-metal contact, in addition to making the Surge noticeably quieter, also results in much less wear and tear on the moving parts. And that translates into longer life, which is what we wish for all of our tools…

Although it did a great job on my ceiling nailers, I wanted to see if the Milwaukee Surge hydraulic driver could handle something a bit more challenging. When I got home, I grabbed a 3/16” X 6” Timberlok screw, and a 3/8” X 4” lag screw, and headed outside. The Surge had no trouble with either of them; it drove both fasteners steadily through the dimensional lumber I tested it on. Even though it has less than 1/3 the torque of the standard impact driver, the Surge has enough oomph to handle the occasional bigger job.

While reviewing the Milwaukee Fuel M18 impact driver last year, I went on a bit of a rant about the lack of bit holders on the current crop of tools. I like having a spot to store an extra bit, dammit! Seems like my demented rant paid off – the Milwaukee Surge hydraulic driver comes with both a belt hook and a bit holder, which can be installed on either side of the tool.

It’s obvious the design team at Milwaukee spent some time considering the other things that are important to the users of a tool like the Surge. Most good impact drivers have three mode settings. The Milwaukee Surge hydraulic driver has four – the usual low, medium and high, and a fourth setting optimized for driving self-tapping screws.

Electricians and HVAC people drive a LOT of these little buggers, and the fourth mode is meant to make their lives a carefree paradise – or at least less aggravating. The tool senses when the tip of the screw breaks through the material being drilled, and immediately slows the driver’s speed. This gives the user more control, keeps the screws from “walking”, and helps prevent stripped, snapped and overdriven fasteners.

So who is a good prospect to benefit from the Milwaukee Surge hydraulic driver? First off, anyone who is fond of their hearing, and too forgetful – or stubborn – to slap on their hearing protection all the time. The Surge would likely be a welcome addition to the tool kit of any electrician, HVAC tech or installer, plumber, carpenter, remodeler or DIYer. It has power to spare for its intended use of small to medium-diameter fasteners, and it can bury a big lag, should the need arise.

The primary benefits – reduced noise and vibration – will be welcome to anyone who uses an impact driver frequently. The smaller profile lets you wiggle into those tight spots, and the light weight will be welcome when you’re holding it overhead for extended periods, such as when you’re fixing a disintegrating ceiling.

The Milwaukee Surge would also be an excellent option for anyone working in a noise-sensitive environment, such as an office building, private home, school, etc. It would also make you much less annoying to other nearby workers who have to listen as you drive fasteners all day. And its noise level of 76dB puts it well below the 85dB threshold set by OSHA for requiring hearing protection, for users exposed to noise levels for long periods of time. Most impact drivers fall in the 85-95 dB range. 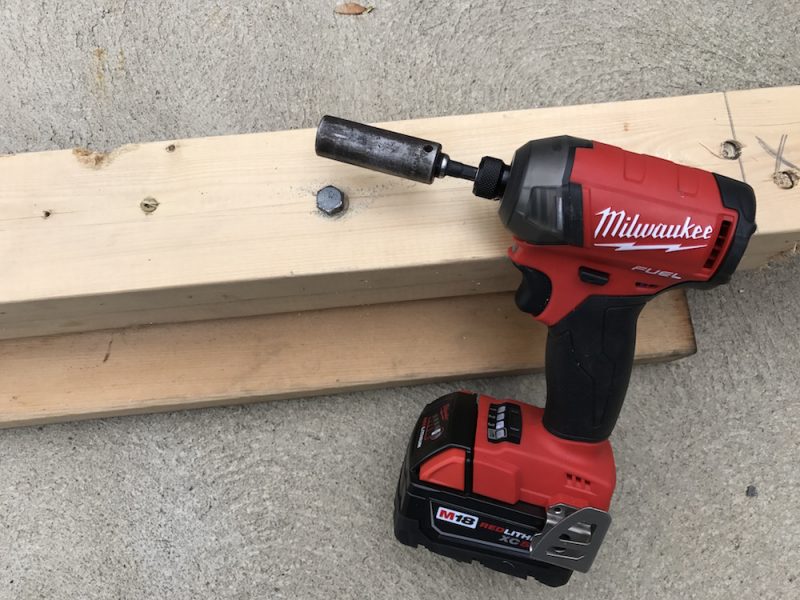