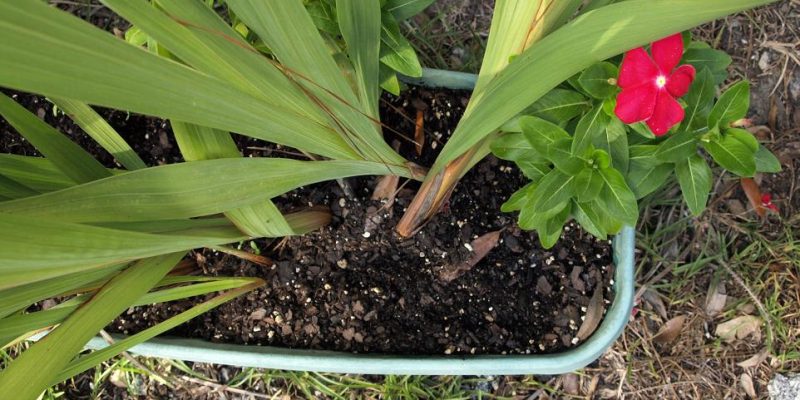 Anyone who has ever had a container garden knows that sometimes the planters in questions can start to look a little sparse for one reason or another. Suppose the seeds that were planted on one side refused to come up but the ones on the other side are now pushing two feet tall. Or maybe the container was full but one of the plants didn’t make it through a spate of inhospitable weather. (Read: the winter chill or the summer heat murdered it). Maybe the plants didn’t like their new home or roommate. Or perhaps the responsible party went out of town. Then they came back to find their nicely weeded container garden had turned into a scary-as-hell nightmare that swallowed up a whole bunch begonias. So here’s how to cope with an a situation that is all too familiar for most gardeners.

But there’s hope. After all, it’s pretty easy to sprinkle in some extra seeds of fast-growing herbs/flowers that you might already have on hand to fill up the holes. Of course, sometimes this also fails to work. Or you may be running out of time to start from scratch before extremely cold or hot weather hits. Some seeds will refuse to germinate on either or both ends of the spectrum. Cheap annuals that will survive the expected weather for the next couple of months or on-sale perennials from the nearby garden center might be the way to go in this instance. Transplanting a specimen from somewhere else in the yard to fill the gap also works but gardeners naturally must first have one in order to move it. I personally never do.

Another option is to take the surviving plant out of the container it’s currently in and ditch the container entirely for one that’s a more appropriate size (either larger or smaller). I had a set of water chestnuts that popped up in a planter which had been taken over by weeds. I ended up having to move them into smaller containers so they wouldn’t end up smothered once again. By comparison, I’ve had a lemon thyme plant that’s has grown in one direction but not the other so that it’s simultaneously spilling over the edges of one side and leaving a large gap on the other. It clearly needs a larger container.

Gardeners might even be able to combine two half-filled planters to form one that’s completely full (as shown in the first photo). This works really well with bulb plants. If the problem is a whole bunch of bulbs that may or may not come up, the simplest solution is throwing them all in a container together. I did this with a large assortment of bulbs that I wasn’t sure would return. This used only two different planters, rather than the four or five it might have taken to properly space them out. Doing this resulted in a healthy number of leafy green stalks and at least 3 gladiola blooms out of each set. This technique didn’t use up as many containers and I still had some flowers to show for it.

As a side note, it’s a good idea to be particularly careful with the roots when moving plants around. I’m not the most patient person in the world and plants are generally forgiving sorts but there are a few that really don’t like it when you’re not super-careful with them when they’re being transplanted. Of course, none of these types live in my garden for obvious reasons.

To avoid having the same problem arise later on, you’ll want to put annuals with annuals and perennials with perennials. Of course, for the love of all that is holy keep the edibles with other edibles! You do not want to accidentally be snacking on what you thought was an herb only to find out you ate a potentially toxic plant instead. I speak from the sad experience as a person who managed to eat a nasty flavored bug because it was hiding among the garlic chives. Gardeners should also make sure that the plants in question have similar watering requirements. It’s not a good idea to stick water loving plants like mint with something that prefers to be kept high and dry such as a cactus, for instance. That is the perfect recipe for a fatal situation. Lastly, don’t forget to keep weeding and watering the refurbished planters on a regular basis. Otherwise you might find yourself back at square one.