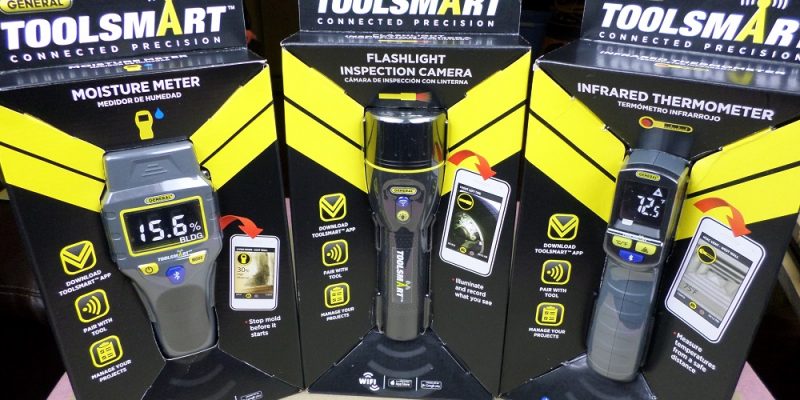 Back in May, I had the pleasure of reviewing General’s new ToolSmart lineup, a collection of electronic tools designed to make your life and projects easier. While each works as a stand-alone tool (the new flashlight camera is stand-alone only as a flashlight), their real claim to fame is the ability to interface with your smartphone using the ToolSmart app. Not content with only four great tools, General has rolled out three new additions to put a big ol’ bluetoothy grin on that already lovely face of yours. They were kind enough to send them over for review so let’s jump right in and see what they’re all about!

General ToolSmart – Salute When You Say That

I’ve had several of General’s products in my toolboxes for many years and general-ly find them to be an admiral line of budget tools. Before ToolSmart, however, I’d never used any of their electronic tools. Having spent some time now with the ToolSmart units, they’ve proven to be pretty damn good.

If you missed my review of the starting lineup (TS01 laser distance measurer, TS02 digital angle finder, TS03 video inspection camera (borescope) and the TS04 digital multimeter ), you can read it here. The three new ToolSmart tools – which I’ll be reviewing now – are the TS05 infrared thermometer, the TS06 moisture meter and the TS07 inspection flashlight camera.

ToolSmart tools interact with your iPhone or Android based smartphone by way of the free ToolSmart app. When I reviewed the first four tools, the app was not yet fully functional (it is now). I’ve since been able to test the then-missing features and found them to work well, albeit not always as intuitive to navigate as I’d like. But once you figure it all out it’s easy to manage a smooth workflow.

The app adds features such as the ability to log measurements with the touch of a button, sort and document your measurements by “projects”, overlay the readings onto photographs of the worksite and more. Simply drag and drop the readings onto a photo then save and share as needed. The app also turns your smartphone into a second screen, making two person jobs that much more convenient.

Is it hot in here or it is just you? The TS05 gives a quick, reliable answer. This is a no contact IR thermometer that’s perfect for finding air leaks around doors and windows, identifying overheated wires, measuring the temperature of water pipes, checking on the BBQ and so on. Just squeeze the trigger and point to take a measurement. The reading is automatically held on screen when the trigger is released.

It’s also the perfect tool to verify that an air conditioner is cooling sufficiently or that concrete is within the acceptable range before applying temperature sensitive flooring products. A built-in laser pointer helps to accurately aim the sensor.

There are a handful of things that set this thermometer apart from many similar units on the market. One is the impressive temperature range of -40° to 1076°F (-40° to 580°C), which is wider than many others out there. And the beautiful large digit, high contrast LCD display is perfectly lit, making it very easy to read even in bright areas.

One particularly brilliant touch is an integral diffraction grating that splits the laser pointer into a circular array of dots (every other IR thermometer that I’m aware of projects only a single dot). Like any infrared thermometer, the area being measured is distance dependent. The farther away you are, the wider it becomes. The pointer does a nice job of indicating the size of the surface under test so you know if you’re close enough to pinpoint the area of concern.

The thermometer has Bluetooth connectivity and – like the other ToolSmart tools – the TS05 enjoys all of the benefits of the ToolSmart app. Finally, the size, weight and ergonomic grip are all pretty much perfect. I have nothing but praise for the TS05! Available from Lowes for only $39.99, the decision has already been made for you.

How’s your wood? Is it moist? Did you just cringe? Some people despise that word, but sometimes it’s vital to know if something is moist or not. Too much moisture in a home can breed dangerous mold and mildew. And too much moisture in your wood can lead to a project that self destructs, ripping and twisting itself apart with unstoppable hydraulic forces.

The TS06 has two measuring modes: one for wood and the other for building materials, such as drywall and ceiling tiles. A suspicious water stain on a wall or ceiling may indicate a water leak. To determine if it’s a current problem, use the sharp probes to measure the moisture content and track any problems back to the source. This can save you the headache of indiscriminately busting up walls in search of a leaky pipe.

If you’re a woodworker, like me, you know how important it is to work with wood that has acclimated to the relative humidity of its environment. As wood absorbs and loses water, its cross grain dimensions increase and decrease respectively. Freshly cut wood or lumber will generally have a relatively high moisture content. The ToolSmart TS06 will let you know when the time is right.

In rough construction – where lumber is generally joined at the ends – wood “movement” isn’t much of a concern because there is negligible change in the lengthwise dimension (the direction of the grain). But in woodworking – where wood is more often joined edge to edge and face to face – the effects of wood movement can destroy all of your hard work, especially when mixing dry and wet wood.

When you bring wood into your shop, it’s best to allow it to sit until it’s reached equilibrium with respect to the ambient air and wood that you know is already dry, as glue joints and wooden joinery can fail if wood is used before it’s properly “seasoned”. Depending on the initial moisture content, this may take days or even years (factors include wood species, thickness, airflow, temperature and so on).

How Moist Is Too Moist?

The acceptable moisture range for woodworking depends on your regional climate. For example, if you live in the deserts of Nevada – where the air is dry – you can expect moisture contents around 6%, maybe even lower. But here in Florida – where muggy is a way of life – levels of 9-11% are normal.

The TS06 moisture meter comes with extra test pins and has a calibration resistor in the protective cap. Like the IR thermometer, this unit also has an easy to read LCD display, hold feature and auto power off. It also shares the same $39.99 price point; not bad at all for what you get.

Of the seven ToolSmart tools, this one has the most to nitpick. It’s not that it doesn’t work. It actually works pretty well. Mostly. General just missed the mark on a few minor aspects. But first, let’s talk about what the TS07 got right.

It has a good quality 1280 x 720 camera and the three 2-Watt LEDs are plenty bright for most situations. The app interface is simple, straightforward and works perfectly. You can view and save video and snapshots – both of which are automatically time and date stamped – to your smart phone, allowing for easy documentation and sharing.

There are five flashlight modes: 100% brightness, 50%, 25%, strobe and SOS. The yellow button with the light bulb icon is used to cycle through the modes.

The TS07 flashlight camera creates its own WiFi hotspot (like the TS03 video inspection borescope camera) with a 30 ft. range and minimal lag. It also comes with a 3.7V rechargeable lithium-ion battery, which is a nice feature. A USB charging cable is also included (but you have to supply your own AC power adapter).

I mentioned that the TS07 has some issues and I’d be remiss to ignore them. First of all, balance: The unit is noticeably front heavy, so keep a firm grip on it. Secondly, the instructions are a bit off in how they describe the operation of the charge and WiFi indicator LEDs. I’ll chalk this one up to an edditing era (Get it? I’m so meta!). You have to unscrew the front bezel to charge the battery, which struck me as weird. But that’s just me being petty; It’s certainly not a deal breaker.

What annoyed me the most about the TS07 is the power-off procedure. The instructions say to press and hold the yellow button. Well, the farthest it will get you – no matter how long you press it – is to the SOS mode. You have to press the button again to cycle down to “off”.

I finally realized that I could sometimes (but not always) avoid flashing the SOS signal like someone stricken by imaginary crisis every time I use my flashlight, eventually downgrading the annoyance to a mere inconvenience. The trick is to release the button as soon as the light goes dark (i.e., the instant it enters SOS mode, but before the flashing actually begins) and then quickly press it again.

Alternatively, you can power off the flashlight by manually scrolling through the modes until you reach off. Either way, there’s really no avoiding that annoying SOS mode every time you use the flashlight; it’s a flaw that turns me off much quicker than the flashlight does.

The TS07 does an admirable job at what it’s meant to do. But really, on and off are the most basic possible flashlight operations; they should work properly. Instead, it feels like a design error that was ignored. Overall, it’s not too bad for $69.99. I just wish they’d taken the time to polish it up a bit. And maybe add SD card functionality.

Personally, I’m sold on ToolSmart. 6 of the 7 tools are all-around solid performers. Same goes for the ToolSmart app. As for the TS07 flashlight inspection camera, I really hope they work out the kinks for future production runs. It has its pluses and I really did want to love it. As is, I’m on the fence and just can’t give it an enthusiastic recommendation.

The rest of the ToolSmart lineup, however: Absolutely! Highly recommended! I can’t wait to see what else they might add to the collection. Odds are, it’ll be a winner.