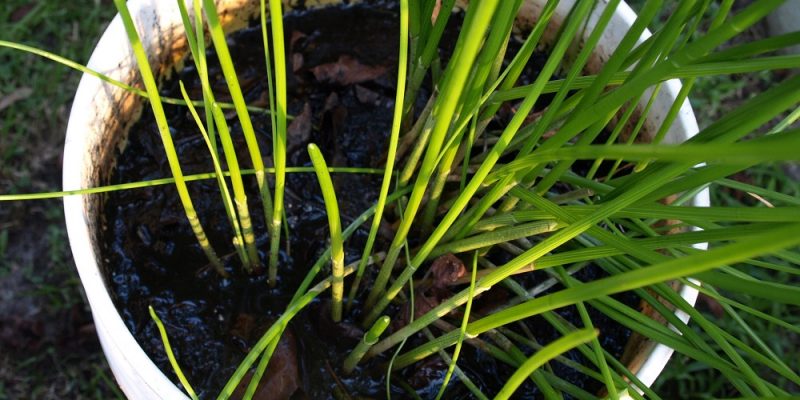 In the beginning, the water chestnut (Eleocharis dulcis) was without form and void. It was small with long, green leaves but otherwise barely resembled a plant, as is often the case with specimens that are sold in 4 inch containers. I had purchased it as my experimental plant for the year. Incidentally, you should definitely get a few experimental plants every year, because sometimes these unexpected additions to the yard can be the most fun.

You can start water chestnuts from organically grown corms in much the same way that you would with ginger and turmeric. However, I purchased mine from Wellspring Gardens. When buying “water chestnuts” be careful not to get Trapa natans, because European water chestnuts are highly invasive and certainly not the droids you’re looking for. I personally try to avoid anything labeled highly invasive (Pay no attention to the peppermint behind the curtain) though it’s really the quiet ones, like strawberries, that end up giving me trouble.

Part One: Finding a Container 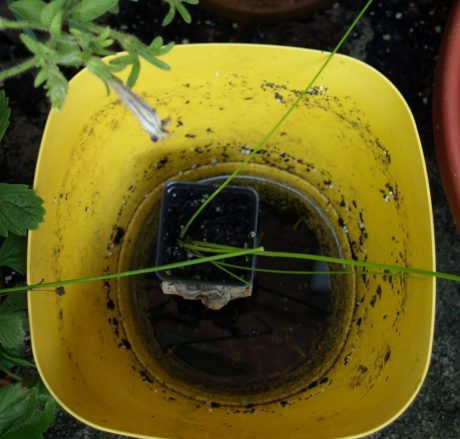 To grow Asian water chestnuts, you need; a plant, a deep container that holds water, a bag of potting soil, and enough water to fill up said container. I used really cheap potting soil because, according to what I’ve read on the subject, the soil basically serves to keep the plant in place. Now watch me have teensy little corms because I cut corners. It wouldn’t be the first time my penny pinching habits have gotten me into trouble.

I also don’t advise you to look at the bucket your spouse uses for mopping floors and go “Aha! That will work!” then proceed to abscond with it. That’s a scenario that could certainly end badly. Keep in mind that water chestnuts are like aquatic potatoes and the bigger the container, the more corms you will hopefully get. But any ordinary 5 gallon bucket will do. You may also want to take the precaution of getting a bucket that is made from food grade plastic because they’re less likely to leach all kinds of crazy chemicals into your food. Or so, I’ve heard.

Anyway, the process is easy: you fill the bucket with the dirt, tuck the water chestnut seedling in securely, and flood the entire thing. Be sure the seedling isn’t doing the backstroke on the top at this point. If it is, stick in back in the mud. You’ll need to keep the water topped up to about 4 inches above the mud but if the plant is smaller, a little less won’t hurt it. The water may develop a layer of nasty green scum that looks alarmingly like the contents in some refrigerators. This is typical. Just scoop the green goo off as it appears and eventually it will stop forming.

My main concern with the standing water was to keep from breeding mosquitoes because I’m their favorite summer delicacy unless I’m covered in DEET based bug spray. Some people say that keeping a goldfish or two in the container helps, but our last goldfish ended up resembling a koi. I also didn’t want to have to dispose of a dead goldfish or two in the likely event that the water evaporated. Plus, the neighborhood cats have an alarming tendency to ferret out any nip I’m growing and kill it dead. I don’t want to set up a sushi buffet for them as well.

With that said, the fish might work. I also have read about some types of moss that reduces the surface area of the water and thus inhibits mosquitoes but it’s not a product typically sold at Lowes, Ace, or Home Depot. The best bet seems to be Bt pellets, but I never applied them so I can’t speak for how well they actually work. The mosquitoes are probably plotting to carry me away in a giant bloodsucking cloud but if I stay inside until maybe December, they’ll be mostly dead by then. Except for that one that always gets in my room in January and proceeds to dive bomb me in the middle of the night. 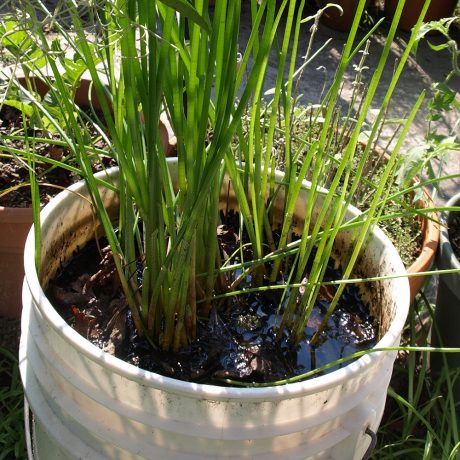 The bad news about global warming is that the weather gremlins decided we’re apparently getting a monsoon season. I feel like lodging a complaint with their customer services reps. “Hello, weather gremlins? Yes, I signed up for warmer temperatures but this whole rain every day thing is kind of spoiling my summer.” I somehow feel they’d be more accommodating than my electric company, though.

It hasn’t stopped raining in over a month. The bonus is that I haven’t had to water the water chestnuts, which is as redundant as it sounds. They’ve gone from a spindly little seedling to almost filling up the bucket I’m growing them in which is very exciting for a garden geek like myself.  No bugs, no diseases, no problems. They’ve practically grown themselves.

Most of the innumerable articles that I’ve read state that water chestnuts need a growing season of about 7 months. So while I would love to brag and show off the numerous corms my plant produced, the results won’t be in for awhile yet. The company I bought them from lists water chestnuts as a zone 9b+ plant and other websites mentioned that the lowest zone they can be grown outside is a zone 8. I certainly hope that’s true because during the winter my house morphs into a jungle complete with wild animals (I have several dogs of the subspecies greedius maximus).

So if you’re growing water chestnuts in a cooler zone, it’s probably a good idea to bring them indoors and leave them in a sunny spot until they turn brown and die back. Then they can be drained, harvested, peeled, and eaten. It’s said the water chestnuts can tolerate a tad of frost, but I personally wouldn’t risk it. Also: be sure to save some to plant next year!