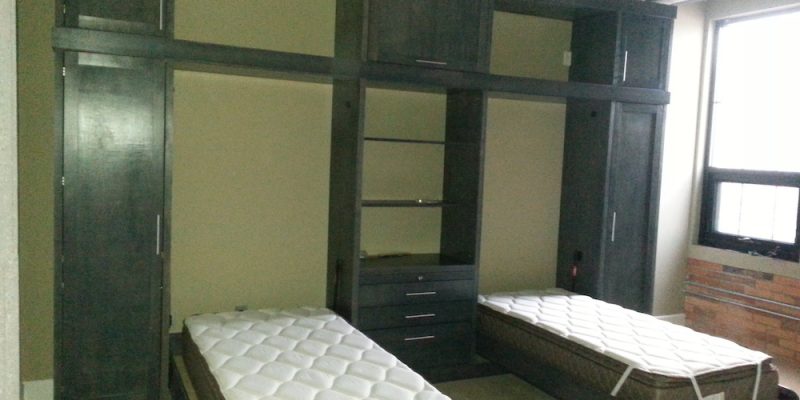 As a kid, I was fascinated with Murphy beds. A bed that folds up into the wall! Amazing! It just made so much sense…not to mention it looked totally FUN! In reality, I had only seen Murphy beds in the movies. Watching old black and white comedies on TV, the Murphy bed was an irresistible prop for slapstick comedians like the Marx Brothers (to this day, Charlie Chaplin’s drunken wrestling match with the Murphy bed is an all-time classic). It wasn’t until I moved to New York City in my early 20’s and began renovation work on older apartment buildings that I actually saw my first Murphy bed in real life. I gotta admit, the old steel-spring jobs do look a bit like an instrument of torture by today’s standards!

In the early part of the 20th century when a lot of the apartment buildings in America’s major cities were constructed, the Murphy bed was a very modern contraption. Patented by William Murphy in 1900, the Murphy bed could turn a single room apartment from a bedroom at night into a proper sitting room or parlor during the day. Legend has it that Murphy used this as a way to get around the moral code of the time which prevented women from entering a man’s bedroom. Alas, like so many of man’s great inventions, he built it to impress the ladies!

Luckily for us, the rattly old metal mechanisms and spring frames are a thing of the past, and modern, engineered folding bed systems are once again popular, as financially strapped millennials share smaller apartments, and their baby-boomer elders look to downsize. I recently built a twin Murphy bed for a wonderful couple who was moving from their house to a downtown condo, and wanted to turn their spare room into a fully functional office that could serve as an occasional guest bedroom.

I did my shop drawings and cut lists using Sketchup, and after doing some research on the options for folding bed mechanisms, decided to go with the kits from Create-A-Bed which I purchased through our sponsor Rockler. I did as much of the construction in the shop as I could, but with two beds, two built in armoires, a central bookcase and computer work station, it was so big that I couldn’t assemble the whole thing at one time in my little shop!

The Create-A-Bed kits are top notch quality with heavy-duty steel parts and sturdy actuators. The instructions (which include a DVD) are good. Because I was doing something a bit different with it, I checked in with tech support before straying too far from the instructions, and they were really friendly and helpful. The only issue that I have with the mechanisms is that there is zero adjustment built into any of the hardware, so shop fabrication needs to be precise and field adjustments need to be a bit… imaginative.


Of course, not all Murphy bed projects need to be as elaborate as mine. If you want to build one by the numbers in the manual provided by Create-A-Bed, I would say it is very do-able for the average weekend warrior who knows how to cut plywood properly and drill holes accurately. You can build one with a circular saw, a cordless drill and a couple of Forstner bits.

So get busy, and turn that bedroom into your new project room! In the words of the great Chico Marx… “That’s-a Wondaful-a Beda!! Bookcase-a by Day, Bed-a by night!”

Pricing and Where to Buy Create A Bed Kits

Various kits are available depending on the size mattress you’re dealing with. Each of the three kits mentioned in this article retail for just over $300.