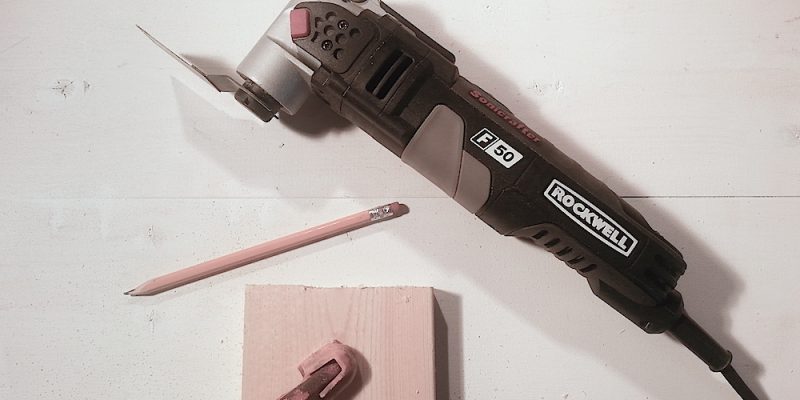 A little background on oscillating tools for the uninitiated; the oscillating “Multitool” was originated by the German tool company Fein, and they held the patent for 25 years on these truly handy, versatile detailing tools. With a range of detail sander and cutting heads, they were the remodeler’s secret weapon, but the price tag made them a big investment. Frankly, despite the tool’s awesomeness, a lot of remodelers wanted one, but just didn’t want to pay the price.

About five years ago, the patent ran out, and there was a literal gold rush among toolmakers to bring a “Multitool” to market, which has been well chronicled here on Home Fixated. A lot of those early knock-offs were…not good. One big exception was Rockwell. This sleeping giant of the tool industry has owned, at various times, Delta, Porter Cable and others. Some of the beautiful old power tools in my shop are Rockwell products. Previous tools aside, Rockwell has now jumped into the oscillating tool market with both feet.

I have an older Rockwell X2 and my original Fein MultiMaster, so I have a bit of perspective here. I have to say, the F50 kicks butt on multiple levels. Out of the box, the “Hyperlock“ blade-release system has received a tuneup and is better than previous iterations, which were already good. The Rockwell system has a flip release that accepts the myriad of proprietary blade designs out there, which will save you a lot of money on name brand blades.

The dual headlights on the F50 are a nice upgrade from earlier models. Oscillating tools excel at tricky cuts in tricky situations, and the lights make working in dark corners a LOT easier. And, when it comes to the cutting… “It cuts like Buttah,” as my old boss used to say. There is noticeably less vibration than older models (thanks to a new counterweight system,) with noticeably more power. You can really lean on this thing! In fact, according to manufacturers specs, you can lay into the cut with 35 lbs of force without bogging down, and in my unscientific test, I found this to be true. This is 30% more force than other brands can withstand. Now, I don’t know why you would need to put 35 lbs behind a detailing tool, particularly since it’s usually best to let the tool do the work, but…you can.

I have got to say that without a doubt, this is one of the finest oscillating tools that I have worked with to date. If you have been waiting to jump into the multi-tool market, this may be the time to buy. At a very reasonable 120 clams, it comes with a variety of blades and sanding pads. Ready to work with out of the box.