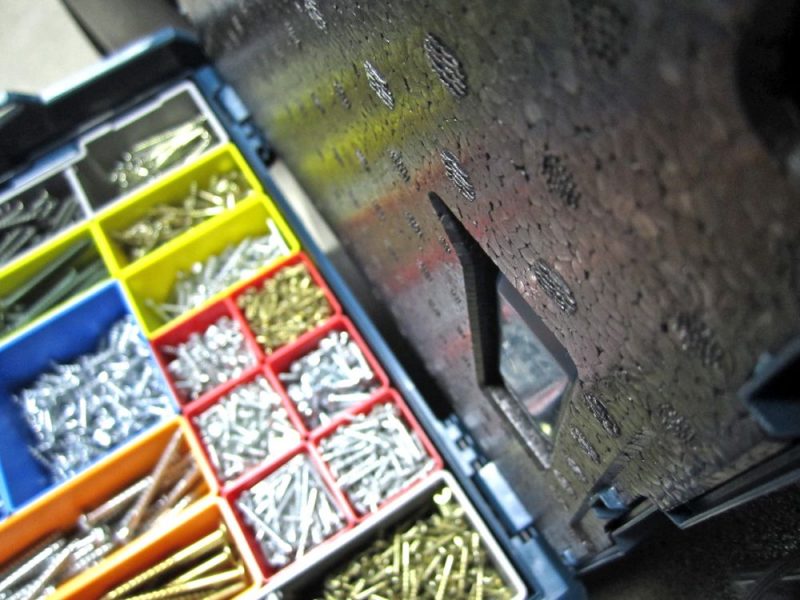 Tool and accessory organization has been around for years, with Festool in particular being well known for their Systainer and Sortainer products. In fact, if you looked into a high quality modular storage, organization and transport solution (here in the States), Festool was pretty much the only game in town. But watch your back Festool, Bosch (and Sortimo) are gunning for you with their new line of Click & Go L-Boxx models. Although you can get the L-Boxx in sizes big enough to store your worm drive circ saw, we recently checked out the smallest in the series, the L-Boxx-1A for fastener and accessory storage. Bosch sent us a few L-Boxx-1A’s to test out, and, they’re also providing a killer LBoxx prize package to one lucky winner of our December 2012 HomeFixated Free Stuff Giveaway. Win it, and even Santa will covet your newfound organization. 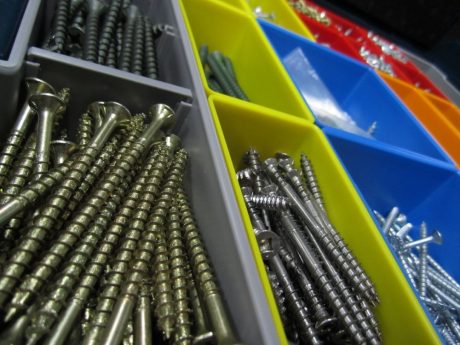 I like fasteners. Scratch that. . . I LOVE fasteners. There are few things that pain me more than a home improvement project that suddenly requires a fastener I don’t have readily on hand. In a perfect world, I’d like one wall of my shop to look like the hardware aisle at Home Depot or Lowes, with little baggies of every fastener you might ever need. However, since I don’t have a 50 yard long wall for baggies of hardware, I instead have made do with drawers filled with little containers of them. Oh, and boxes. Yes, I have cardboard boxes literally filled with assortments of screws and nails.

Suffice it to say, cardboard boxes do not make for efficient storage. And those clear fishing tackle style boxes often didn’t have sections large enough to store certain kinds of fasteners like lag bolts. To really put the Bosch L-Boxx-1A to the test, Spax sent us almost two dozen varieties of their various high quality fasteners. From stainless steel deck screws to beefy PowerLags, we had Spax fasteners under an inch long to over four inches. My daughter and I set out to see if one L-Boxx-1A could store them all. Before giving the answer away, I have to admit we cheated a bit.

We quickly realized the standard assortment of bins that are included with the L-Boxx-1A just wasn’t going to work for the shear number of varieties we needed to sort. The giant green bin was too big, and we needed 20 containers total. So, we raided a 2nd L-Boxx and swapped out the interchangeable bins for sizes that worked best with the quantity of Spax Screws

we had on hand. Problem solved. 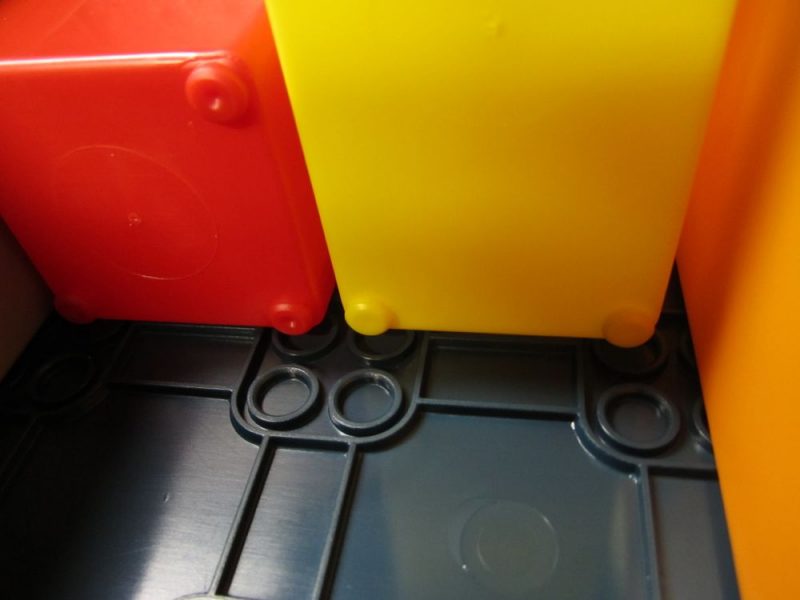 One of the great things about the L-Boxx-1A is that the base under the various sizes of bins has a raised grid that aligns perfectly with the nubs on the bottom of each bin. The result is a flexible grid that lets you put whatever size bin you need, wherever you want to. And, the bins then stay there.

The only thing worse than not being able to organize your fasteners, is organizing them and then having them jostled back into chaos. Some organizer boxes work great, until they are turned sideways or upside down. The L-Boxx-1A appeared to have a nice tight fit thanks in part to the grid mentioned above and a foam liner on the lid, but we wanted to test to make sure. After getting all 20 Spax fasteners into their tidy bins, we shut the lid and then proceded to dance the Macarena with it. OK, so we didn’t actually dance the Macarena. That would have been horribly dated and humiliating. We did shake the box around, turn it upside down and sideways, and just generally treated it like a giant, unergonomic maraca. 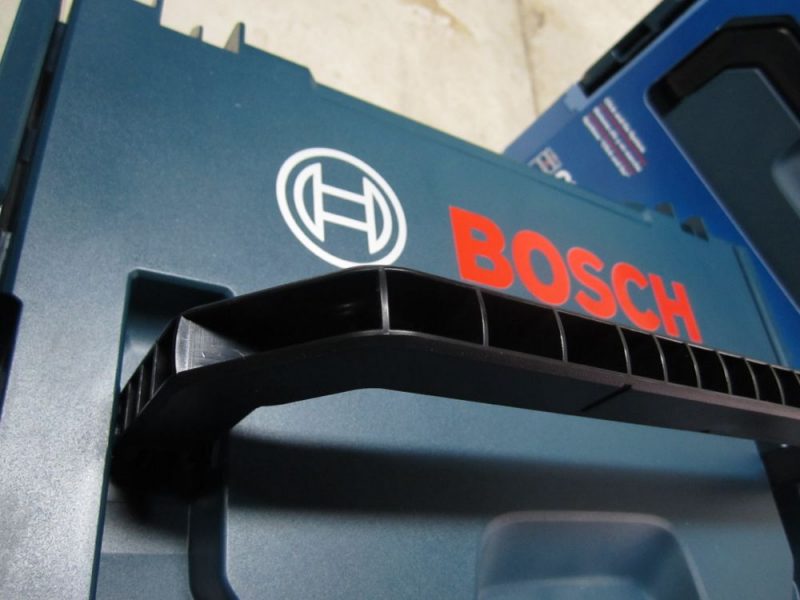 When we flipped the L-Boxx-1A right side up and opened the lid, every bin was exactly where we left it, and not a single screw was out of place. Since these L-Boxxes have a beefy top-handle and a side handle for carrying them 007-briefcase-style, keeping contents under control is key. The L-Boxx-1A delivers wiggle and jiggle-proof fastener storage with flexibility and ease. 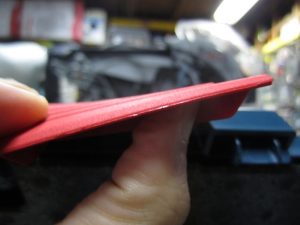 I like metal stuff, so anytime I’m dealing with plastic of any kind I get a little wary. But if the L-Boxx were made of steel, you could probably count on it weighing about five times as much and being more or less completely useless for any kind of transport. Plus it would cost a bunch more. Instead of diamond-tread chrome, you’ll find solid ABS plastic in Bosch blue, with hints of red, just to keep Milwaukee on it toes. My first impression of the latches were that they were flimsy. Closer inspection (and torture testing) revealed they’re not flimsy, just flexible. Like a spry side-show contortionist, the L-Boxx latches bend but don’t break. I tweaked and twisted the latches to see if they’d snap, but they flexed and rebounded like Dennis Rodman before he became an actor. Time will tell how they weather ongoing abuse, but I was impressed with their lightweight and resilient design.

One of the features Bosch lists for the L-Boxx is “Theft Security – Lockable cases.” While adding a recess for a lock seems like a reasonable “why not?” thing to include, we question its true value as theft security. Unless you epoxy your L-Boxx to your workbench or truck (not recommended, as it drastically reduces portability), just about anyone that wants your L-Boxxes can pick one up from one of its convenient handles and walk away with it. We recommend relying on more robust security than a small padlock or cable. In particular, giving any unauthorized intruder that gets within 10 feet of your L-Boxx a surly and vigilant stare-down is always an option. Our friends over at ToolSkool, found another handy use for the recess by using it for bungee cord during transport. In addition to that handy tip, ToolSkool did a fantastic job compiling just about everything you might want to know about the L-Boxx series (except of course brilliant insights found exclusively in written form on HomeFixated). Check out their video below, which comes complete with sexy mood lighting on the well-stocked pegboard behind Brad: 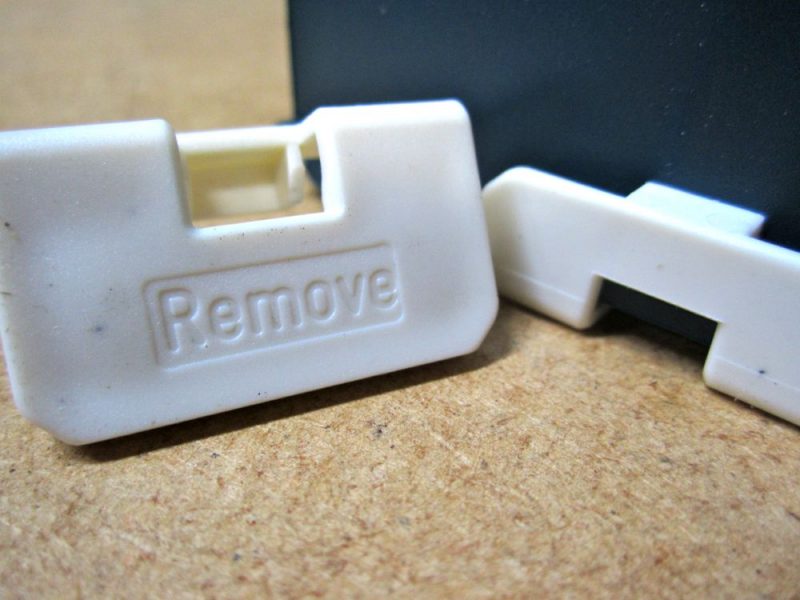 When you first receive your L-Boxxes, you’ll notice four white plastic clips near the bottom corner of each box. They are so finely crafted you might assume they are part of the L-Boxx system. When we first spotted them, we thought they might be for folks that don’t want their L-Boxx to mate with others; an L-Boxx chastity clip of sorts. But then we realized Bosch would never want to prevent the joyous union of two (or more) L-Boxxes. That, and we took a closer look at the clip which is engraved with the subtle word “REMOVE.” So feel free to toss those clips and let your L-Boxxes cavort intimately with one another; it’s what they were made to do. 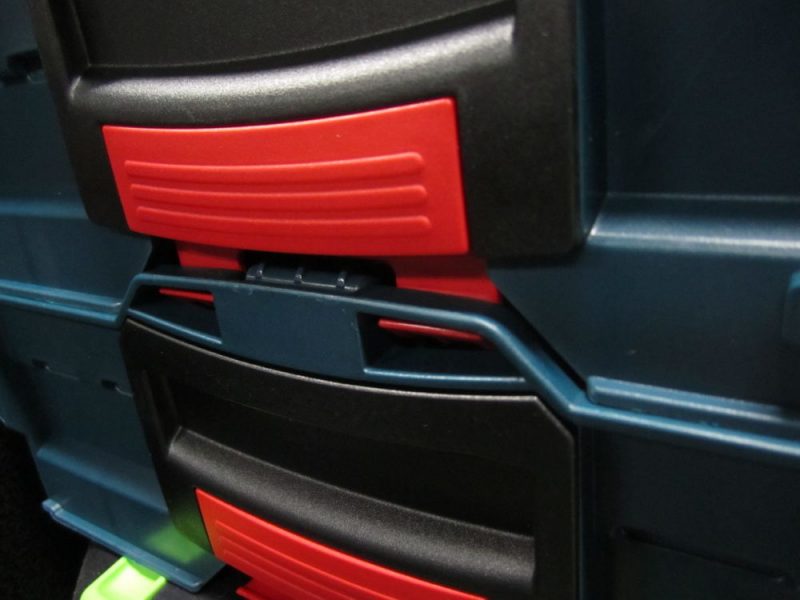 This is where the whole “Click and Go” slogan comes into play. Being able to mate one L-Boxx filled with select accessories, with another L-Boxx of your finish carpentry power tools, with another L-Boxx of fasteners, all make for a stack of goodness that makes tackling targeted tasks less about hunting and more about doing. You’ll simply grab the stack of L-Boxxes you need and “Go.” When you’re done, click them back together and the chore of “packing up” may seem like a distant memory. We did find that we had to focus a bit to make two boxes click together. If you’re off with your alignment, you’ll just hear more “thunking” than “clicking.” With a little practice, it’s not rocket science, and you’ll be clicking and going like a pro. But docking them does take a little concentration.

One downside to using any kind of modular storage system like the L-Boxx, is that the storage makes just about every tool, box of accessories, or secret stash of chocolate look exactly the same. You no longer have the color cues or conspicuous branding of your various tool storage cases and bags to clue you in on what’s what. Since the ABS construction of the L-Boxx and Bosch’s need to be blue don’t lend themselves to being transparent, I strongly encourage you to invest a little in a Label Maker

so you know at a glance what’s hiding in that particular L-Boxx. Otherwise, anyone with more than a few L-Boxxes will spend inordinate amounts of time just opening and closing lids looking for the right box.

If you’re accustomed to big box store fishing tackle style storage boxes, the L-Boxx-1A will come with a bit of sticker shock. If you plan to store fasteners or accessories such as reciprocating and jig saw blades like we did, you’re investing a good chunk of cash in that storage and organization. We found the street price on Amazon on of the Bosch LBOXX-1A

to be just shy of $50. In comparison, the similar but slightly smaller Festool 497694 SYS-! Systainer

was $76. Larger sizes of the L-Boxx aren’t much spendier, so we think they’re a good value given their closest competition. 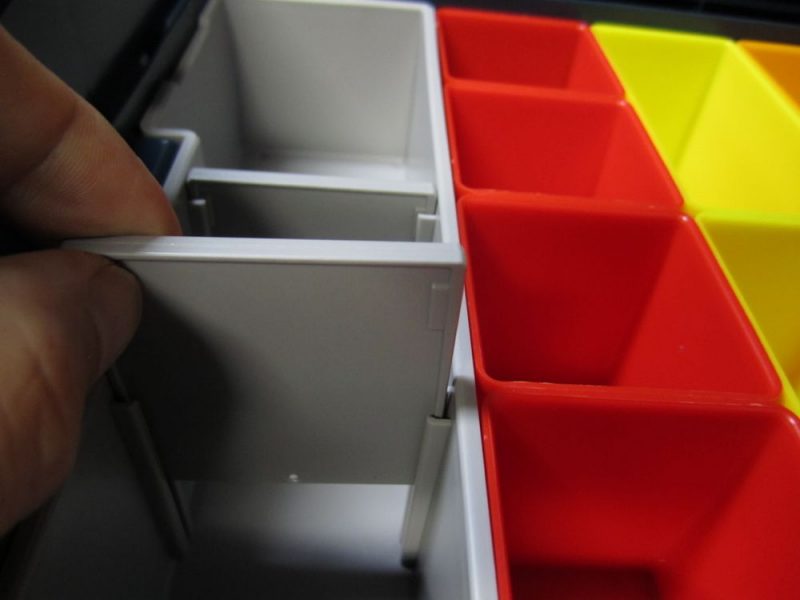 If you’re serious about storing and organizing your fasteners, then the Bosch L-Boxx-1A should definitely be on your radar. Beyond just organizing accessories and fasteners, the L-Boxx line of products in general are a great way to bring chaos to its knees and usher efficiency into your garage, shop and/or truck. Pros will love the ability to lock together sets of tools and accessories that belong together. They’ll also love saying goodbye to the mishmash of boxes and bags that store their gear. Bosch has an L-Boxx for just about everything. The next thing you know, Bosch might even release something like a PortaLED L-Boxx model to combine a job site LED light system with an L-Boxx. After that, we’re keeping our fingers crossed for an L-Boxx that makes your lunch; the 12v “Lunch-Boxx.” 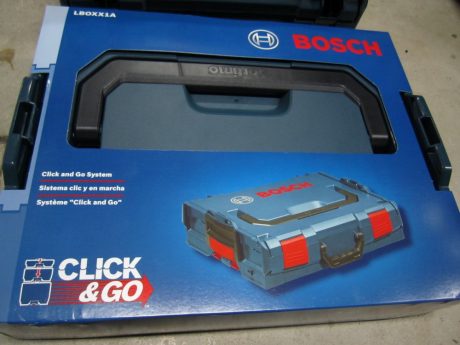 for $50 from Amazon, or check out numerous L-Boxx models with or without tools

. For fasteners to load your new L-Boxx-1A with, be sure to check out Spax Screws