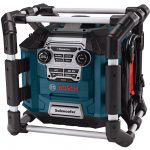 You may not expect a big corporation like Bosch to drop-it-like-it’s-hot, but trust me, they’re down! At the semi-recent Bosch Global Leadership Tour, we were shown the Power Box 360, being billed as the ultimate jobsite sound system (plus it’s great for around the house too). Then we were shown the Power Box 360 being hurled off a platform onto a concrete parking lot. When Bosch says their gear is durable, they’re willing to put their sound system where their mouth is. More details on drop-it-like-its-hot survivability shortly.

The Power Box first made its appearance back in 2004, followed by an upgrade in 2006. You’ll immediately recognize the Power Box 360 thanks to it’s burly roll cage. So what’s so special about the new 360? First off, it has five speakers (including an integrated sub woofer that might make Snoop proud). The speaker orientation lets you drop the Power Box 360 in the middle of your work area and then experience high quality audio in every direction. It’s also a great way to help broaden the musical tastes of your neighbors. Even your far away neighbors since the PB360S model offers more than 2X the sound power output of the previous version, and the PB360D offers up to 5X the power output.

Are you ready for the drop-it-like-its-hot moment? We have the drop test in action, complete with a slo-mo sequence for added drama. We’ve heard rumors of the Power Box 360 surviving far higher and spectacular falls, but abuse yours at your own risk! Here’s the proof of durability (note the only glitch was the audio cable from the ipod that was in the 360 came partially unplugged (an issue of physics rather than a defect of the Power Box): 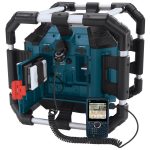 The Power Box 360 offers AM/FM (does anyone still use those?) as well as a sealed media bay for you iPod, iPhone or other media player (just don’t try to cram your iPad in it, OK?) The media bay even has an SD Card slot or usb slot for your thumb drive (just load mp3 or WMA files on either). The USB port will charge your devices for you too. There’s also an auxiliary input in case you want to get old-school and hook up your portable cd player. Or you can go new-school and hook up your satellite radio. The PB360D model even features a built-in SIRIUS™ Dock & Play port for connecting select SIRIUS satellite radio devices (device, antenna and subscription sold separately). It seems Bosch pretty much has just about every audio angle covered. Sorry, no RCA turntable input though.

On the backside of the Power Box 360 you’ll find a unique built-in battery bay. Plug it in and you’re conveniently charging Bosch 14.4V or 18V lithium-ion power tool batteries inside the Power Box 360. If you don’t have access to AC outlets, those same Bosch batteries can be used to power the unit. Very handy! If you do have AC, the Power Box 360 can be your power center. The PB360S has built-in four-way power outlets and the PB360D has four-way GFCI outlets, letting you power what you need on-site. Both models also have a 12V DC (car charger) in case you’re really short on electricity. The PB360D has a fully backlit front control panel and remote control with onboard storage, enabling you to make long distance dedications (up to 40′ with the remote).

What really makes the Power Box 360 models stand out though is their durability. If you’re in the market for a tough job site radio (or just some tunes around the house / yard), the Power Box 360 is your ticket! You can pick up the Bosch PB360S Power Box

as soon as it’s available (which is slated to be soon).