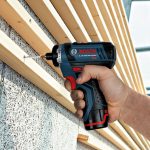 Bosch recently sent us their latest in sub-compact drill drivers, the PS21 Pocket Driver. We’re no strangers to Bosch’s 12v line of portable cordless tools. And its no secret that we’re generally fans of almost anything Bosch. They make great stuff. Having just started testing of one of Milwaukee’s M12 drivers, we were curious to see how the PS21 stacked up.

Some of you might underestimate the PS21 because it’s earlier sibling, the Bosch PS20, was a little less endowed with torque. We liked the PS20, but did wish it had a little more umph. The Bosch engineers clearly have been chugging some caffeine and putting in late hours. Not only did they make the PS21 more compact, they also boosted torque big-time. While the PS20 sported 80 in lbs of torque, the new PS21 pocket driver has 265 in lbs. That’s a major boost, and you feel it. I drove long deck screws with no pre-drilling and the PS21 handled it effortlessly.

Some other great features include a bright LED, 20 position clutch (plus drill setting) and a very welcome 2nd speed. No load RPM runs 0-350 in first gear, and 0-1300 in 2nd gear. The barrel of the tool is so compact, they really couldn’t make it any shorter (if they did, you’d be banging your fingers against whatever you were driving screws into). Excellent Bosch ergonomics as usual. And it weighs in at a spritely 1.7 pounds. One feature I really love is the “AutoLock” function: As soon as you release the trigger, the bit locks in place allowing you to use good old fashioned hand power to rotate the tool when you need a little extra torque or finesse. That’s also good to use when your significant other walks by, so they really think you’re doing serious manual labor. As soon as they leave, go back to letting the PS21 pocket driver do the heavy lifting. 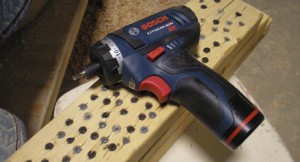 CopTool (the blogging arm of our sponsor Ohio Power Tool), did a thorough hands-on review of the PS21 and were equally impressed. In fact, they screwed a couple 2×4’s together with a lot of screws using less than a single charge on the Bosch pocket driver. You can see the peg-board-like aftermath of their testing in the image here. You can see a little promo video straight from Bosch below.

The Bosch PS21 is a tool I’ll regularly reach for in place of my full size drill on a much more regular basis, something I couldn’t say on some of the earlier less torquey pocket drivers. These compact tools continue to evolve and improve, making them more and more useful with each evolution.

Our sponsor Ohio Power Tool carries the Bosch PS21-2A Pocket Driver for a bargain price of $130.