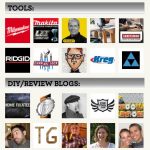 So, you’re totally hip (you know, like Oprah), and use Twitter daily, right? If so, you’re probably aware there are a bazillion home improvement products and tool brands you can follow. If you’re not hip, or at least not on Twitter, head on over to their site and start trying to decipher what @ # and RT means right away. Otherwise you risk being technologically and socially left behind. Whether you’re just getting started on Twitter, or you’ve been on there since Ashton Kutcher only had about a dozen followers, our friend Tony over at PoundedThumb.net has put together a great list of 40 “must follow” Twitterati, HomeFixated included!

And not to brag, but we just celebrated passing the 1500 follower mark for @HomeFixated! OK, we are bragging a little bit. Or at least we were. Frankly, we were feeling pretty smug about our 1500 semi-devoted followers until we realized:

1) @AplusK, Ashton Kutcher has 4,769,280 followers. Seriously. That means we are .03% as popular as Ashton. That’s really humbling on so many levels. Note to self: have an affair with Demi Moore, asap!
2) @FakeAhmadinejad has about 100 followers. That makes us about 15 times as popular as (one of many) fake versions of the Iranian president, who is almost universally hated. Now we’re starting to feel popular again! Nothing like comparing oneself to fake holocaust deniers to boost your Twitter follower self-esteem.
3) @ThisOldHouse has about 3000 followers. Twice as popular as us, but hey, they are on TV and we’re not. Put us on national television (offers please), and I guarantee we’d have more than 3000 followers (no offense to TOH, which is a great show). And, if everyone of our Twitter followers forced one of their friends to follow @HomeFixated, we’d be more popular than This Old House. Bob Vila would be so disappointed.