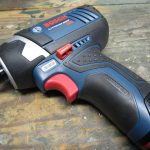 Back in 2009, we did a hands-on review of the Bosch PS40. We found the PS40 to be a pretty awesome impact driver. When I did an initial test drive of the new PS41 at a recent Bosch media event, my initial impression was that it was an even more robust tool. Bosch sent us two new PS41’s recently, one to brutalize/review/caress, and another to give away FREE to a lucky Home Fixated reader as part of our August Free Stuff Giveaway.

First things first, we had to randomly squeeze the trigger without having the tool do anything. This is the power tool equivalent to sitting at a stop light in a muscle car and revving the engine. If you’ve ever done the latter, then you know that sweet feeling when a solid steel chassis flexes from the torque of a nice high-output engine. Similarly, you can actually feel the PS41 impact driver rotate in your hand from the torque. Nice!

The three LED light ring is not just an afterthought on these. The LED’s really do a great job of providing relatively even light when you’re working in dark areas (which for some reason I often am). The on-tool battery indicator is a welcome addition too. The battery indicator is becoming the norm on cordless tools these days, but it was not present the on the original PS40. We’re glad to see it on the PS41. We also happened to notice the PS41 has a lanyard mount at the end of the motor housing. I have no idea who is going to put a lanyard on their impact driver, but if you want to make the PS41 into a really manly necklace, then this feature is ideal! You could start a new fashion trend, not unlike Flavor Flav did with the whole clock necklace craze. You heard it here first folks.

The PS41 has a really dense, compact and beefy feel. Rubber over-molding makes for a well protected tool, and a very grippy one. The rubber is on the grip too, making it a no-slip proposition. Compared to the PS40 predecessor, the PS41 is more compact, but also a bit rounder. In fact, I’d describe it as less aerodynamic and space-gunny than the PS40. Yeah, I said “space-gunny.” So if you plan to run through a wind tunnel with your hand outstretched in front of you holding an impact driver, or you need a space gun prop for that adult sci-fi flick you’re starring in, then you better stick with the PS40. Otherwise, I like the compact dimensions of the PS41. The tight dimensions are especially handy for working in close-quarters. 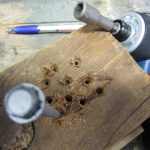 I conducted a lag bolt test pitting the PS40 against the newer PS41, using HomeFixated’s usual relatively un-scientific methodology. Bosch has since updated its 12Vmax batteries, so I actually used the same freshly charged newer battery version on both tools (running it on the PS40 first, which would technically give it a slight advantage). I drove a 6″ lag bolt about half way into a 4×4″ block of wood without a pilot hole. The PS40 did it in 20 seconds, the PS41 did it in 9 seconds. A pretty epic win for the PS41 impact driver. I also used the PS41 to drive about a dozen lag bolts (again without pilot holes), one after another. It definitely generated some heat around the motor housing, but it kept cranking away.

I am pretty amazed at the amount of power and torque Bosch managed to cram into such a small form factor. Cordless impact drivers have come a long way from just a year or two ago, and Bosch continues to innovate for even more impressive performance in this category. The Bosch PS41 Impact Driver is a great highly portable, highly effective tool that I think will serve many DIY and professional users very well.

If you’re lucky enough to be reading this review in August 2010, you have a shot at winning the PS41 FREE in our monthly Free Stuff Giveaway! If you’d rather just buy one, the Bosch PS41 is available from our sponsor Ohio Power Tool for around $170.