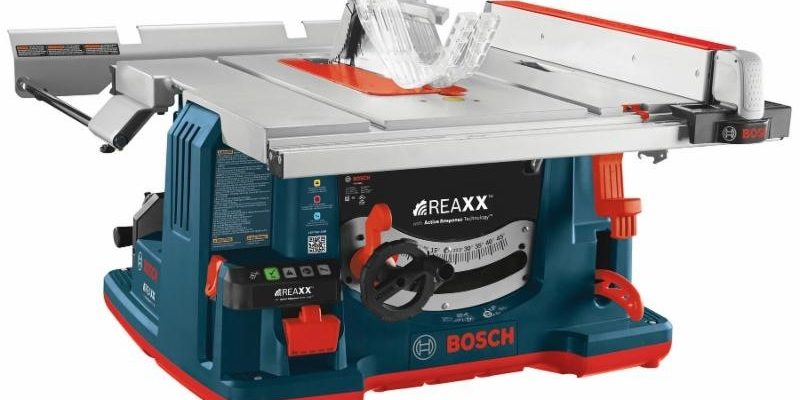 Steve Jobs was legendary for his secrecy surrounding new technology and innovation. It’s part of the mystique that turned Apple from a dying tech has-been to the multi-zillion dollar mega-brand it is today. While secrecy surrounding tech gizmos is commonplace, it’s not often we see that intrigue spill over into the world of power tools. However, at the Bosch media event I attended a short time ago at World of Concrete, Bosch appeared to be borrowing a page or two from the Steve Jobs playbook. Signing non-disclosure agreements at media events is common. What was not common was the energy with which Bosch emphasized the secrecy of what they unveiled to the media in attendance. I assumed I would find myself answering yes to the question “Have you ever been in a Turkish prison” if I could not control the urge to live-tweet what Bosch was revealing to us. The media only knew this new product involved sawing. This led me to comment beforehand, “Unless it cuts with a high-power laser or competes with SawStop, I’m going to be disappointed.” I was not disappointed (and it doesn’t cut with lasers).

What stood before us, draped in a matte black drop cloth, appeared to be about the size and shape of a jobsite table saw. When the veil was lifted, we were shocked to see what looked very much like the current generation of Bosch jobsite table saws. The only thing that set this saw apart was a glowing control panel area, and a surprising splash of. . . wait for it. . . orange!?? Apparently cooler heads prevailed and the saw revealed in the video below sports the more traditional Bosch blue with red accents. Of course, what sets this table saw apart is not its color, but rather some impressive safety technology that not only rivals SawStop technology, but completely surpasses it. Get ready to rock out with this guitar-laden intro video from Bosch, on the new GTS1041A REAXX Portable Jobsite Table Saw:

Bosch REAXX Table Saw – What It Does

While countless work-hours and likely millions of dollars of R&D went into it, what the REAXX system does is pretty straight forward. The saw detects flesh and rapidly withdraws the saw blade in a way that “reduces the potential of serious user injury.” We saw this demonstrated with what might or might not have been a German wurst, and the wurst was virtually unscathed. From the demonstration we witnessed it appears like it would be very challenging to accidentally cut off a finger on the saw.

How the Bosch REAXX Table Saw is Different from SawStop

I’m no physicist, but I do know that a spinning saw blade carries a whole lot of energy. SawStop put some of this angular momentum to use to help the blade rapidly withdraw in a safety incident. Unfortunately, all that energy usually results in destroying the saw blade (that, and ordering a $69 replacement cartridge if you don’t have one on standby). REAXX puts Bosch’s expertise working with airbag technology to use by rapidly moving the blade out of the way, all while braking (not breaking) the blade. The REAXX also comes with a double cartridge, so once you have an activation, you can immediately replace it with the other cartridge stowed right on-board.

Resetting the saws is different. SawStop describes, “The entire reset process takes less than five minutes.” Bosch claims (and we’ve seen it demonstrated, albeit by someone with a bit of practice), that their saw can be reset in under a minute. Bosch states, “A single two-shot cartridge enables activation for two incidents before replacement is needed. Just rotate the activation cartridge and reset the drop mechanism and the REAXX table saw is ready to go. All necessary parts, instructions and wrenches are located onboard the saw, including storage for extra activation cartridges.” When you consider that SawStop’s quoted five minute time-frame doesn’t include the 1-2 hours you’ll waste going to the store to buy a new saw blade to replace your destroyed blade, and another wait for the cartridge replacement if you didn’t plan ahead, we think Bosch has a glaringly clear advantage here.

I alluded to a glowing indicator button early on. Here’s how Bosch describes it:

The complexity of the Bosch REAXX on-board control system is translated to an intuitive, easy-to-understand LED light panel that communicates and manages saw operation and indicates saw status.
Green means the saw is ready for use
Yellow means the system is set in bypass mode by the operator; this mode is used for cutting conductive materials that can potentially activate the Active Response Technology system. In addition, there’s no override key to lose or misplace, yet still offers various lock-out options to prevent unauthorized bypass mode operation
Red means the saw is not ready and will not function until the user corrects an issue
Blue means the saw requires service

There’s an App for That

I have never really had the urge to communicate electronically with my table saw, but soon, you can:

A near field communicaton (NFC)-enabled phone app offers Bosch REAXX Portable Jobsite Table Saw owners and operators another measure for ease of use. Through the phone app, the saw can communicate information from the onboard control system – such as number of system activations, servicing needs, access to instructions, how-to videos and other details. Also, the saw owner can use the app to manage who can use the bypass and main switches. This capability enables owners and managers to lock the saw as needed, which ensures that jobsite workers cannot bypass the safety system.

Actually, that sounds pretty cool. Just don’t text cute cat photos to your REAXX saw while trying to cut something on it, OK? 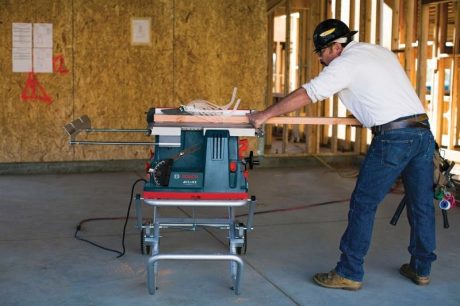 Why Bosch is Going to Get Sued

First off, let me start off by clarifying the Bosch REAXX Table Saw is NOT licensing any SawStop technology. I specifically asked this at the media event and was diplomatically told, “no comment.” However, now that the information has been made public, I was told definitively SawStop tech is not being licensed for REAXX. If there was a licensing agreement in place, SawStop would presumably be pleased to be making money off of it. They’d also likely be dismally depressed by the fact that a competitor with superior technology would be taking market share from them in a niche they previously enjoyed a monopoly in.

Aside from being a PHD physicist, Steve Gass (SawStop inventor), was also a patent attorney. According to Wikipedia and the Power Tool Institute (a group representing many major tool brands that lobbied again SawStop technology being mandated), there are “more than 50 patents” related to SawStop’s braking system. I can only assume given his background and the sheer number of patents, that Dr. Gass wants his invention protected to the extreme. Given that the REAXX seems like a far more elegant solution than SawStop’s blade-damaging retraction mechanism, I suspect Bosch will be seen as a very real threat to SawStop. I just don’t see Steve Gass walking away from this one without a fight. As much as Bosch touts the innovative aspects of the REAXX saw, as far as I can tell it still functions off the same or similar blade capacitance tech that SawStop invented.

Why Bosch May Not Care About Getting Sued

According to the US Patent and Trademark office, a Utility Patent is “Issued for the invention of a new and useful process, machine, manufacture, or composition of matter, or a new and useful improvement thereof“. . . I added the emphasis there. Aside from not being a physicist, I’m also not a patent attorney (Dr Gass clearly has an edge over me here). I don’t even play one of those on TV. Even so, I’m sure Bosch would not have pursued the REAXX Table Saw without being quite confident in their legal standing. One word I would never use to describe Bosch corporate culture would be reckless. I suspect they went into this knowing there is a very high probability they’ll be sued by SawStop, and at the same time having the expectation that they would prevail in any such suit. While I personally hope Bosch and SawStop can sing Kumbaya and peacefully coexist sans lawsuit, if there is a suit, it will mark the first time woodworkers, DIY enthusiasts, construction pro’s and power tool fans will be wishing for a live-feed of legal proceedings. I suspect there’s much more of this Bosch vs SawStop story to come, and it promises to be very interesting.

Lawsuit or not, I am thrilled to see competition in the realm of power tool safety. It’s my hope that consumers (and their wayward fingers, hands and various other body parts) will be the true winners as the Bosch REAXX hits the market.

In more concrete terms, the Bosch REAXX will sport a 15 AMP, 4.0 Hp max motor that generates 3650 RPM. It also includes an optimized rail system “that boasts a pre-squaring SquareLock Rip Fence.” The table is cast aluminum and can rip up to 25″, which makes it great for full sheet materials. There’s also a welcome 18″ on-board rear outfeed support. The REAXX can be transported via the Bosch Gravity-Rise Stand™, a stand I’ve used (and loved) for years on my older Bosch table saw. And since many of the dangers of table saws don’t just involve cutting digits off (kickback is a major culprit), the Bosch REAXX saw includes the Smart Guard System modular blade guard. The Bosch REAXX Jobsite Table Saw is expected to be available fall of this year (2015), at a projected retail price of $1499 USD. Stay tuned!