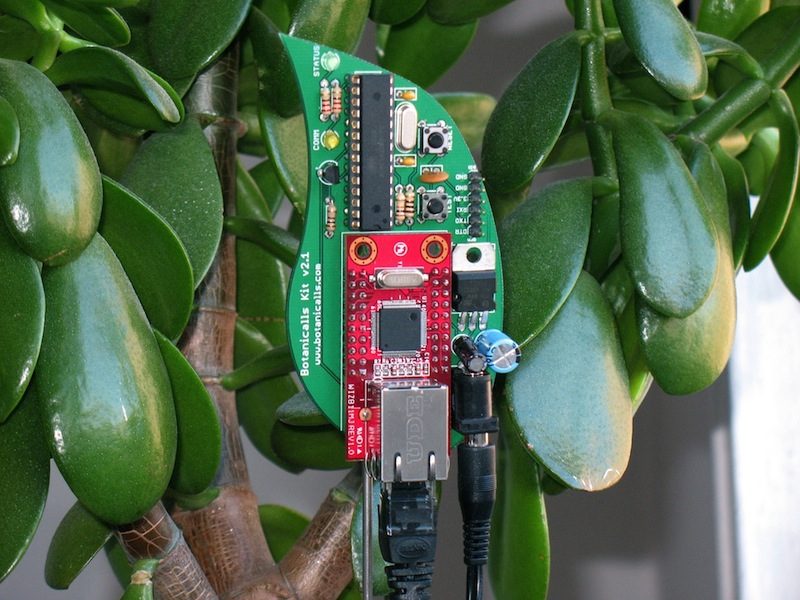 Sometimes life gets away from us. I know it does for me, what with a couple of kids, work, school,  and so on and so forth.  Often some ‘lesser’ things get put on the back burner.  Most of those lesser things include my household chores and our plants (both indoors and outdoors). I often don’t even think about plants until the leaves are drooped or falling off. It’s always been the best indicator for me. Apparently, it has also been an indicator for other people too, because a handful of students from NYU have created and are now marketing a way for your plants to let you know exactly how they feel about you and the quality of care you’re giving them. Their product, computer-age plant sensors called Botanicalls, can call you and now tweet you if it needs something. Sure, it’s not the same as “Feed Me, Maurice” but it’s still pretty creepy.

The how of this is pretty interesting. The main unit is a sensor that detects, among other things, moisture content and sunlight. However, unlike most sensors that give a digital readout (that no one bothers to read anyway), this has customizable sayings that call you to let you know what the plant needs. (You may note that the Cuban oregano in the ABC video on Botanicalls has an accent, as does the Scottish moss.)  It’s not just a lack of water that your plant calls you about – you can get a phone call to let you know that your plant has been over watered, or just a simple thanks for taking care of it. Where has society gone when you can get a thank you from a plant, but not from someone when you hold the door open for them?

The classic version was built while the developers were still at NYU – it simply called you.  How very retro.  Now there’s a 2.0 version of this puppy which tweets you its needs. I’ve only recently started using Twitter myself; now I have to compete with ficus and garlic chives for attention from my friends?  What is this world coming to?

If you’d like to buy a kit yourself, prepare to shell out a little bit for it. The starting price for a Botanicalls kit is about $100 – kinda expensive for monitoring a $3 plant – but when you need fresh cilantro for you salsa and you find that you forgot to water it and it died, then it may be worth it, maybe…  Plus there’s this plant/human threat that Botanicalls wants you to know about; watch their video and see for yourself.