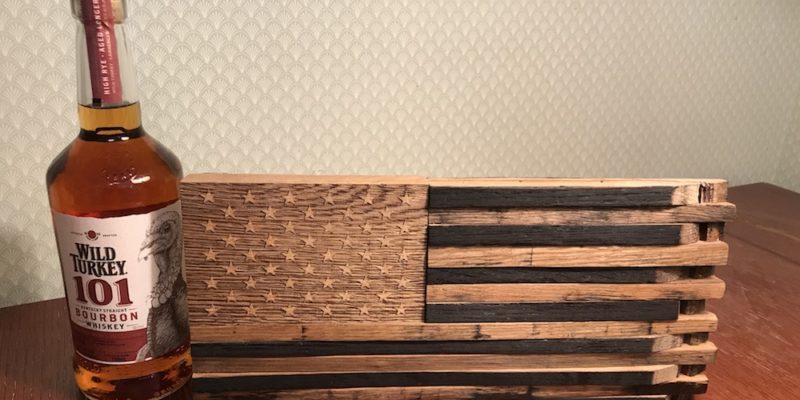 Here at HomeFixated, we’re always on the lookout for woodworking projects to inspire and amaze you. Many of those projects originate right here, from the talented and creative (not to mention frequently humorous) Steve French. A recent purchase I made led to the discovery of another creative maker with an interesting story, one that’s sure to warm the heart much like a wee drop of bourbon warms the body. Join us as we explore how former paratrooper Chris Cruise found his calling designing and making custom bourbon barrel flags.

A native of southern Mississippi, Chris joined the Army after high school. He was a member of the U.S. Army’s fabled 82nd Airborne Division, and his unit was tasked with providing security for operations bases in Iraq during Operation Iraqi Freedom. After serving for four years, Chris left the military, and relocated to his wife’s home state of Kentucky.

A Project Becomes A Passion

Like many vets transitioning from the military to private life, Chris was uncertain for a while what his future path might be. He had the desire to do something meaningful, to give back to the community. He also wanted to help fellow vets who were also struggling to readjust to civilian life.

During this period, he decided to try his hand at woodworking. One of his early projects was a homemade Christmas gift. Taking staves from used bourbon barrels, Chris concocted a unique item – a large American flag display. It was a perfect project to serve as both a nod to his military service, and a tribute to his wife’s home state. He also enjoyed the time spent in the garage with his son, and found the project therapeutic.

The bourbon barrel flag was a hit, and not surprisingly, a frequent response was “Hey, buddy, can you make one of those for me?!” He did make several more, for family members and friends, and was often touched by the emotional response of the recipients, especially those who were veterans. The light bulb went off, and in 2017 he recruited some fellow vets and established Cruise Customs.

Actually, it was my purchase of one of their flags that led me to want to share their story. As a vet myself (Army MP from 1972-74), I look for opportunities to buy American, and to support vet-owned businesses. Cruise Customs is about as American as it gets, with a current staff of two full-time vets, two part-time vets, and two spouses of vets working part-time.

They make their American flags in several sizes and configurations, from American white oak, and each bourbon barrel flag is individually crafted by one of the vets. Chris says the process of making the flags is meaningful to the guys who make them, as well as to the recipients.

The bourbon barrel flags are available in several sizes, and with a variety of customization options. I bought the Lieutenant, which is the smallest flag, at roughly 8×14”. I got it for my wife, and it will hang in the entryway at our farmhouse. I really like the 3D texture of the flag, and the distressed, weathered look of the stripes. It came with a little stand, but I’ll add a couple of small eye hooks in the back for hanging.

The next size up is the Captain, weighing in at 22 lbs. and measuring about 18×36”. The BMFIC (Big ‘Merican Flag In Charge) is the Colonel, coming in at 24×48”, and handcrafted from a hefty 35 lbs. of American white oak. The larger flags come with D-rings for hanging, and all the flags are backed with a layer of black felt.

Chris and the guys also have a few custom accessories available. Current offerings include bourbon barrel wood smoking chips, handcrafted American flag coasters, and a bourbon barrel candle. A camo hat with a bourbon barrel flag patch (also available separately) is listed, but currently sold out (in 24 hours!). A new batch should be ready by the end of January – get in line. Behind me!

Every Bourbon Barrel Flag Can Tell A Story

Unlike products that come off an assembly line, every Cruise Customs bourbon barrel flag is unique, with its own character. Variations in grain, coloration and thickness of each stave mean no two flags are exactly alike. I love the texture and three-dimensional look of the flags, with their curved stripes and raised stars.

Once you decide on a size for your flag, there are a number of ways you can personalize it, or customize it (hence “Customs”). Buying a flag with a firefighter in mind? Check out the “red Line of Courage” version. One of the stripes is stained red, symbolizing “The last ounce of courage firefighters find deep in their blood to conquer their darkest fears, in order to save and protect life and property.”

There’s also a version available for members of the law enforcement community. The Blue Line Flag “Represents the officer and the courage they find deep inside when faced with insurmountable odds.” It incorporates a black background, as a reminder of fallen fellow officers.

Looking for a truly personal way to customize a flag, for yourself or someone else? The guys at Cruise Customs have the technology to fully personalize your bourbon barrel flag. Make your flag truly unique by adding the recipient’s name and service information, or a patriotic quote. Their laser etching equipment can even handle custom logos, like unit insignias or corporate logos. The upcharge for adding a custom name or logo is a very reasonable thirty bucks.

A Barrel Full Of Tools

Since we are somewhat obsessed with tools here at HomeFixated, I asked Chris what tools they primarily use to fabricate their bourbon barrel flags. Like many shops, Cruise Customs decided to stick with one high-quality brand for the majority of their tools. In addition to knowing what to expect in terms of quality, it simplifies things when using several battery-powered tools, as is the case in Chris’s shop. The prevalent color scheme at Cruise Customs is the Yellow and Black of DeWalt.

As you might expect, a table saw is a major player in the process, ripping the staves to a uniform width. A miter saw is another key piece of equipment. These are the most frequently used corded tools in the shop, along with a tool Chris calls “the unsung hero in the shop,” the Porter-Cable Restorer. Some of the tasks assigned to the Restorer are sanding, grinding, and cleaning wood where needed.

Various other hand and power tools are used at various stages of assembling the bourbon barrel flags. The Cruise Customs arsenal includes brushless orbital sanders, brushless impact drivers, and brad nailers, all cordless models from DeWalt. Existing in peaceful harmony with all the Yellow and Black are some blue Kreg jigs, a familiar sight in pretty much every woodworking shop I’ve ever been in.

When Chris Cruise got out of the Army, he was unclear as to what his future might be. His desire was not just to make a living, but to find a way to benefit others in the process. Clearly, by taking his newfound love of woodworking and establishing Cruise Customs, he is well on the path to success.

Chris truly enjoys working with his fellow vets crafting their unique bourbon barrel flags. He’s also happy that the work helps smooth the transition from the military back to civilian life for many of them.

Others in the local community and beyond have also benefitted from Chris’s desire to give back. Cruise Customs has made financial contributions and donated artwork to the Norton Children’s Hospital Cancer Institute and Dogs Helping Heroes, among others.

I admire Chris’s ingenuity, for coming up with a unique way to celebrate both his adopted home state and his country’s symbol. The bourbon barrel flags he and his crew create are truly unique works of art, and are likely to be enjoyed and treasured for decades to come by those fortunate enough to get one. I look forward to proudly displaying ours, and I wish Chris and his team much success. Now go get your OWN bourbon barrel flag – Cheers! 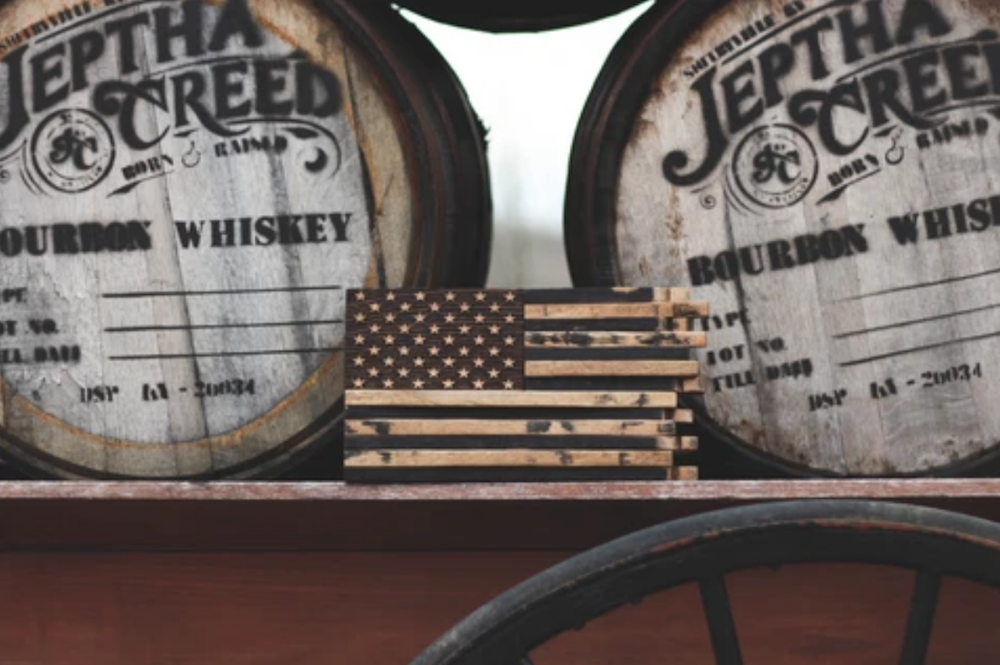