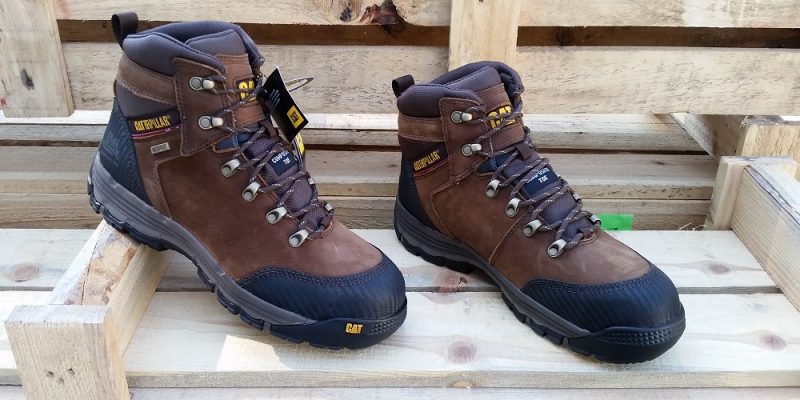 “Your hands are your most important tools” is what a woodworker or carpenter – who must consciously keep his fingers away from flesh hungry blades of death – will tell you. But job site hazards come in many forms, from foremen to foul ups. Caterpillar – the yellow machinery and equipment company – knows that you won’t be moving earth if you can no longer move yourself. So it’s no accident that they have a line of footwear designed to protect those bony flesh tools at the ends of your legs. When Cat foot the bill for a pair of their Caterpillar safety boots, I gathered up my phalanges and metatarsals, plunged my paws into a pair of eleven and a halves and starting kicking the crap out of stuff! Now that I’ve worn them awhile, it’s time to grade their performance.

Starting Off On The Right Foot

Before putting these Caterpillar safety boots to the test, I should mention that Cat’s footwear lineup includes a lot more than just this particular boot. They have a lot of other work shoes and boots and even a casual line that can rightly be considered “fashionable”. I was surprised. So be sure to check out their entire lineup; there’s a lot to chose from.

Every doghouse in the lineup appears to be well built. The particular model I tested is Cat’s Munising 6” WP CT waterproof, composite toe work boot, available in brown or “Dark Shadow”.

The Munising 6” (that’s the overall height) is a waterproof hiking style boot with a composite safety toe cap. The soft, full grain leather panels are stitched together with heavy duty thread. The rubber sole has deep tread for extra grip and provides just the right amount of flexibility to be used as a legitimate hiking boot. Overall, it looks and feels very durable.

Each boot weighs 1 lb, 13 oz; pretty much what you’d expect from paw protectors of this type. According to Caterpillar, the composite toe cap – or, as they call it, “Nano Toe” – is 40% lighter than steel. So that lightens the load a bit.

I like the paracord laces; when you tie them, they stay tied all day long. No need to double knot.

The most important consideration of any footwear is how it feels, especially if you’re on your feet all day. Unless, perhaps, you’re a fashionista. Which, trust me, I’m not. I wear a size 11.5 shoe so I ordered the boots in 11.5 and they fit perfectly. Getting the boot on is a breeze. The two pairs of lace hooks allow the laces to come completely free at the top, giving you an extra wide entry. The finger pull comes in handy as well. You’ll never need a shoe horn or have to fight to put them on or take them off.

For the first week or two, the top edge of the tongue slightly tenderized my shins, especially when I crouched. But it wasn’t too bad. Once they started breaking in, however, they quickly became a very comfortable pair of work boots. Like, seriously comfortable. At no time have the Caterpillar safety boots ached or irritated my feet at all. There’s even an extra bit of rubber-like, EVA heel cushioning in the insole.

I did not test the electrical dielectric properties. But having been in the electronics industry for over 20 years, I “feel confident” that the sole has more than sufficient thickness to prevent arcing to the wearer’s foot from below. I won’t speculate about the body of the boot, but I’m pretty sure ASTM certifications aren’t handed out all willy-nilly. So I’m just going to trust their claim on this one.

Kickin’ It With Caterpillar Safety Boots

My first test was to simply go around and kick the hell out of a bunch of dense objects, such as a cinder block, the 4×4 posts supporting my wooden deck, the corner of my stout workbench and a tree. As expected, I felt no pain whatsoever. And that tree will never talk smack to me again!

Putting All Your Eggs In One Basket – A Caterpillar Safety Boot

This being a safety boot, the characteristic of greatest concern is the ability to prevent your toes from becoming hamburger. I put a boiled egg in a zippered sandwich bag and stuffed it into the toe of the one of the boots. A large egg, it turns out, doesn’t fit all the way into the toe cavity. It’s not a length problem; it’s a matter of girth. The egg is quite a bit thicker than a toe and that ended up being good for the purpose of this test.

Inserted as far as it will go, the thickest part of the egg was right at the edge of the composite toe cap. So ANY movement of the toe cap will be detected in the crush test.

There is absolutely no doubt in my mind that such an impact would have caused severe damage to an unprotected foot. I’d expect broken toes at the least, maybe even severed toes. If you thought I was going to test this on my own foot you’ve got a serious brain deficiency!

As shown above, the egg shell did crack. But again, this egg filled the entire gap between the sole of the boot and the edge of the toe cap and that’s an unrealistic, extreme scenario that a real toe would never experience. I wedged the egg as tight as I thought I could without breaking it.

The result of the test was nothing short of reassuring. While the shell was cracked – an indication that the toe cap moved a small amount – only the white of the egg took any damage. The yolk was completely unharmed. If your toes were in there, they’d be perfectly fine. They wouldn’t even be sore.

Upon inspection, the only damage the boot took was a small, mildly burnished spot on the leather where it took full impact. The wearer’s underwear, however, would likely experience some staining.

There are few shoe issues that suck quite like stepping in a puddle and having soaked feet for the rest of the day.

To find out if these boots can really stave off water, I put the tissue paper packing material back inside of one – from toe to heel – and weighted the boot down in a little over 3” inches of water. I even submerged part of the tongue, which has a bridge of material to prevent water from entering between the body of the boot and the tongue. I let it to soak for 7 minutes, plenty of time for a fair test. It’s not a swim shoe, after all.

So, did the boot leak? Not a drop! The tissue paper was absolutely dry! I had my doubts and initially ran the same test with the other boot, but for only 2 minutes. I really thought I was pressing my luck to exceed 5, but I’d say it held up quite well!

Retro-reflecting On The Caterpillar Safety Boots

Finally, let’s take a quick look at the reflective area on the back of the Caterpillar Safety boot. Providing your pants legs aren’t covering it – which they likely are – this reflective patch is visible with even a very dim light source.

A “retro” reflector isn’t designed to conjure up nostalgic memories from the 70’s. Rather, it reflects light directly back to the source, regardless of the angle of incident. This results in very low light scattering and very high reflectivity. With a bright flashlight, the reflector shines with an almost uncanny glow. But even with a very dim light source (see below) enough light is returned to allow visibility.

Waiting For The Other Shoe To Drop

If I had to buy work boots today, I wouldn’t hesitate for a moment to grab a pair of Caterpillar safety boots. They’re built to protect and last. And for the price, they’re a shoe in. Considering Cat offers a full lineup of quality men’s and women’s work and casual footwear, you’ll easily find the perfect pair to keep those dogs from barking.