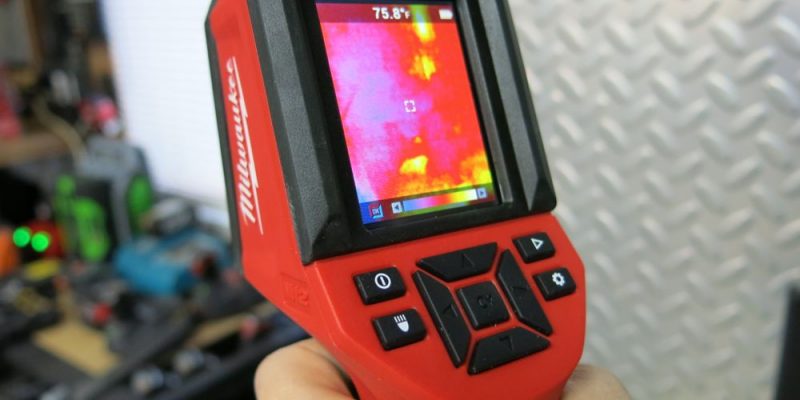 There was a time when infrared imaging was the domain only of the military and law enforcement. You know, those FLIR videos taken from a police helicopter showing a fleeing felon “hiding” in the bushes from officers in foot pursuit. Little did he know his toasty 98.9 degree body showed up on the helicopter’s infrared imaging system lit up like a Christmas tree. As with other technologies, infrared imagers have been on a steady progression to become more affordable. Whether you’re a general contractor, home inspector, or even an ambitious do it yourselfer, products like the Milwaukee M12 7.8KP Thermal imager (model 2258-21) offer great utility at a price that won’t complete deplete your annual tool budget. Does it make sense for you to buy thermal imager? We’ll take a close look at the Milwaukee Thermal Imager and try to answer that question and a few others for you.

In my role as a real estate agent, I universally recommend my buyer clients utilize the services of a professional home inpsector during escrow. More and more home inspectors are using thermal imagers in the course of their work. The tool can quickly help them spot trouble spots without having to do any “destructive investigation” (poke holes in walls). At its most basic level, the Milwaukee Thermal imager provides a few core features. It let’s you take a temperature measurement of just about any surface and it let’s you visualize temperature variation across a broader area (and take a thermal image to save or use later via a simple pull of the trigger). Why is that useful? Let’s dive in to a few of the more practical uses for a thermal imager and why you might want one in your tool arsenal.

As most of us know, when it comes to homes, water is the enemy. On a recent home inspection I was accompanying, the inspector noticed some slight paint bubbling in a ceiling hatch cover. He visualized the hatch with his thermal imager and it was clear the hatch was soaked with water. You could see a circle of temperature variation that was the telltale sign. The inspector removed the hatch to reveal a leaking AC drain hose. Snapping a thermal image documented it all for both the client having the inspection, but also eventually for the existing homeowner and listing agent. We were able to negotiate the repair of that item in my client’s purchase, as well as to avoid the potential for further damage to the property. Bottom line, thermal imagers are great for detecting and pinpointing leaks in floors, ceilings and walls, without making your house look like Swiss Cheese from cutting countless holes into it.

In the last couple decades homes have been getting tighter and tighter. Advances in insulation, weather stripping and building materials are helping homes stay warm in the winter and cool in the summer, all while using less energy. Whether you’re in a home that’s older, or more recent construction, a tool like the Milwaukee Thermal imager can quickly help you spot trouble spots in your energy efficiency. Walking around our home on a “cold” winter night here in San Diego, I was able to spot a couple door thresholds that may as well have been open windows. I also realized that the existing weatherstripping on one side of our front door was not doing it’s job on one side of the door (the middle image above). The tool is also great for spotting leaks in HVAC ducting, which can help you avoid needlessly heating and/or cooling your attic or crawl space. If you find enough of these energy leaks and then take action to correct them, it’s not hard to imagine the Milwaukee M12 Thermal Imager paying for itself in utility bill savings. By they way, that’s a great angle to pitch this purchase to your significant other, especially if you just want to have Thermal Vision like Arnold’s nemesis in the movie Predator!

In San Diego, it’s not uncommon for older homes (and sadly, even a few newer homes) to not have ANY wall insulation. The Milwaukee Thermal Imager is a great tool to figure out what walls are insulated. It’s usually best to do this when there’s a significant temperature difference outside vs inside and then shoot the imager at the interior wall. I did this on a couple walls with the sun beating down on them, and could very clearly see the studs were about the only thing “insulating” the wall. Which leads us to our next, somewhat less conventional use for thermal imagers.

One of my favorite uses for the M12 Thermal imager is to see through walls. This doesn’t work for all walls, but it can be extremely helpful if you’re planning on running wiring or plumbing into walls in existing construction. In the case of our house, using the imager on exterior, uninsulated walls worked best for clearly defining stud locations, including those pesky diagonal and horizontal runs that can make routing wires or plumbing particularly challenging in remodel. I was also able to visualize studs on some interior walls if there was enough temperature variation. The crosshairs shown on the imager’s screen correlate with the laser dots the tool can project on the wall. The closer you are to the wall, the more the lasers can help you pinpoint studs. The Milwaukee Thermal imager provides three modes, two of which can help most if you’re in stud detector operations.

This tool offers three “color palettes” you can quickly toggle between using the left and right arrow control keys. “Rainbow” mode is the best option for showing a broad range of colors / temperatures. The more manly-sounding “Iron-bow” mode is better for revealing smaller temperature differences. It’s one of the two modes I used when using the imager as a stud detector. Lastly, “High Contrast” mode provides a greyscale view that helps more clearly define borders and details of temperature variation in your scene. I used the high contrast mode the most when using the Milwaukee Thermal Imager as a stud detector.

Many tools that assess temperature in some way utilize emissivity (how much a particular surface radiates) to provide more accurate readings. If you’re like most users, your eyes likely start to glaze over when you hear that term, and chances are many users never adjust the setting because the tool seems to work just fine in the default. However if you’d like more accurate readings, Milwaukee makes it easy to adjust by number (for geeks) but also by material (for non-geeks who haven’t memorized the emissivity of various materials you’re likely to encounter).

Two lasers are projected when you lightly pull the trigger on the imager about half way. The lasers correspond to the temperate reading for that area, which then display at the top of the imager’s screen. The lasers are more accurate in close (about 1/2″ at three feet to about 1′ in diameter at about 80′). The Milwaukee M12 Thermal Imager also has a worklight that you can turn on and off with one of the buttons on the control panel. The light is projected by two LED’s and can be useful if you’re rummaging around a dark nook, but don’t expect flashlight level pinpointing or brightness. The work light is best for shedding a little additional light at a close distance.

The protective hood means you don’t really need to lug the full case. The tool is compact enough to put in an inspector’s tool case, and the rubber hood that slides on and off does a great job of protecting the sensor, screen and buttons from potential damage. The tool is also designed so that when you lay it face down, both the trigger and the sensor face are not in contact with whatever grimy spot you set it down on. Compared to other infrared imagers I have seen, the Milwaukee M12 Thermal Imager is one of the most compact pro-grade tools available.

While there are other tools, particularly at higher price points, that offer higher resolution, I found the Milwaukee Thermal Imager to offer a great mix of performance relative to price point. I did find a couple areas for potential improvement. When saving an image, you simply pull the trigger all the way after framing your shot on the screen. At that point the screen will prompt you to “Save or Cancel”. One image is red the other is grey, which you can toggle back and forth. On first use, it’s not really clear which of those two settings you’re selecting. Ideally, the button you’re on should be highlighted by a border or some other visual cue in additional to color. To save you any uncertainty, the button that’s red is the one you’re selecting with. This means you if you hit the OK button after pulling the trigger, the image will be saved. This bugged me less when I realized a second trigger pull after you snap the thermal image will save the file. See what happens when you eventually read the manual?!

Another feature I’d like to see in future models is a backlit control panel. When using a thermal imager you might be in an attic, crawl space, closet, or unlit utility room. Navigating the control buttons in the dark, or even turning on the tool’s worklight function, would be much easier with an illuminated control panel. However if you use the tool enough, the control panel is simple enough to memorize.

I had difficulty getting images off of the imager. First I tried the mini-usb to usb cable and connected it to my Mac desktop. It failed to recognize the device. I then tried to insert the SD card directly into an sd card slot on a Mac laptop. With this I was able to see all the png image files, but when I went to open them up, only a blank, black image appeared. Lastly, I tried a more recent Mac using just the SD card and the files came right up, no problem. If you’re contemplating one of these for professional use, it’s worth noting that while Milwaukee offers reporting software, it’s PC only.

Overall the Milwaukee Thermal Imager is an amazing piece of technology that’s not only fun to use, but also has many very practical applications. If you’re a home inspector or MRO (Maintenance Repair & Operations) guy or gal, you shouldn’t be without one. They’re vital to pinpointing moisture issues or overheating/defective machinery. It’s also a great tool for general contractors, plumbers, electricians and even a few homeowners that can justify the expense to themselves and/or their significant others. We also look forward to seeing this technology continue to both improve in resolution and become more accessible with future models at even lower price points.

You can pick up the Milwaukee M12 Thermal Imager 2258-21 kit (which includes the imager, case, m12 charger and one M12 battery, for just under $500 from our sponsor Ohio Power Tool):