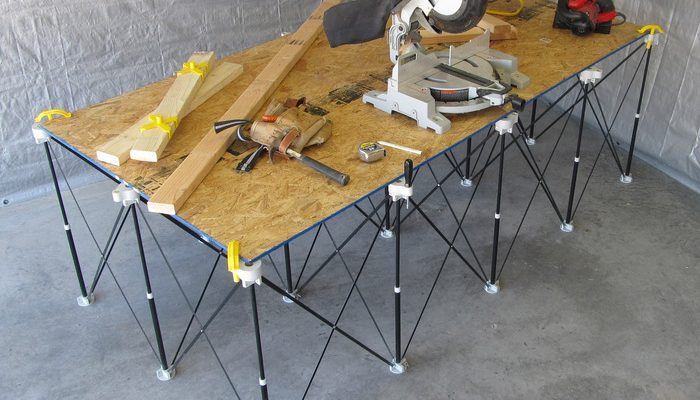 We like keeping our eye on Kickstarter for some out-of-the-ordinary developments in the tool and construction world. It’s where we first discovered Outlaw Fasteners, among others. It’s also where we spotted the new Centipede Sawhorse. It’s like an portable folding chair with aspirations to be an EZ-UP tent mated with your typical sawhorse. The result is an interesting and promising new spin on the sawhorse, allowing for cutting, improvised tables, and more, all with compact convenience.

One thing we really like about this concept is how portable this design is when compared to your typical sawhorse. The whole system collapses into a very compact assembly, yet expands large enough for 4×8′ sheet goods with their PRO version (there’s both a DIY and PRO version available). The DIY kit is about 10 pounds and 2’x4′, the PRO kit weighs in around 30 pounds and is 4’x8′. Both models get you about 30.75″ off the floor. When folded up, the Centipede Sawhorse is 5.75 x 9 x 38″ (DIY) or 9 x 14 x 38″ (PRO). Compared to the pre-assembled sawhorses you find at the big box stores, that’s a nimble setup that has the added bonus of providing more support for your work piece(s). Say goodbye to saggy sheet goods!

Included clamps and supports let you either secure gear or create a more traditional sawhorse design with the use of supports designed for 2x material. The clamps appear to function with friction, so it’s not clear to us how easy or hard it might be to unclamp material. It certainly looks easy to get the clamps in place though. Here’s a video with all the details.

If you’ll be cutting sheet goods on top of the Centipede Sawhorse, you’ll be reassured to know the “P-Tops” on the tops of the Centipede’s supports are both non-marring and replaceable if you happen to get a little careless with your circular saw.

The project is less than a day away from closing on Kickstarter, where it is currently over 200% funded. The DIY version is around $65 including accessories, and the PRO version is around $125 including accessories. They’re also doing some great donations for Habitat for Humanity. Hurry over if you want a shot at the initial production options on Kickstarter!

UPDATE: Check out our Hands-On review of the Centipede Sawhorse here!