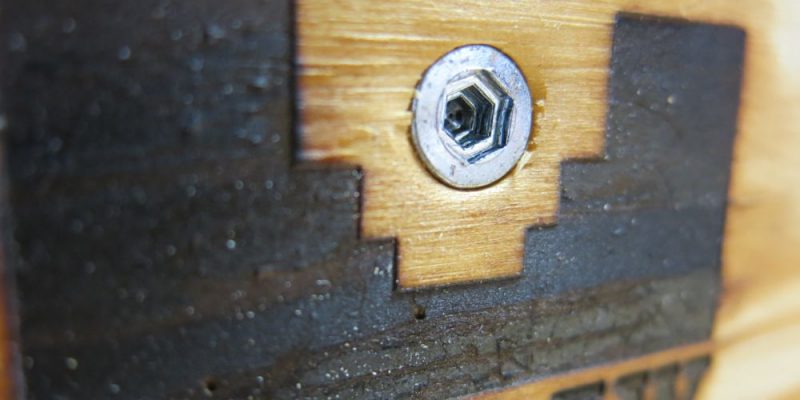 We’ve seen a lot of wacky stuff make its way onto Kickstarter. My personal favorite is Atheist Shoes, which God blessed with a 385 backers that pledged $59,132 of their original modest $30,000 goal. Today, I’m happy to report we’ve found a KickStarter project that might actually appeal to the HomeFixated audience: Outlaw Fasteners. A deck screw, you ask? What could possibly be unique or innovative about that? Read on for the wild video and more screwing innovation than your wildest fantasies. Oh, and if innuendo offends any puritanical sensibilities you might have, you may want to skip to the next HF article.

First off, a word from our legal department. We’d be remiss if we didn’t clarify that Outlaw is currently running a promotional campaign with HomeFixated (you may notice a beautifully click-able ad periodically appear in our sidebar). With that said, now that we’ve seen and tested their product, we’d be writing about them regardless of advertising status. Moving on. One thing we love about Outlaw is that they actually have a sense of humor about their product, and they’re not afraid to take a few risks to promote it with that same approach. Case in point, their awesome KickStarter video:

Definitely one of the more creatively hilarious KickStarter videos we’ve had the pleasure to view. And, it looks like the approach is paying off for them. At the time we drafted this article, they were already over 90% funded. So, what’s so special about these Outlaw screws? Check out a few of the features that make them a very hot choice for screwing.

Outlaw screws feature the UniGrip drive system, which is spec’d to drive screws from 5/64″ to 1/2″ in size. The bit has 18 driving points that hold the fastener tighter than than the grip of a famished anaconda. In fact, the bit holds so securely you can drive a fastener horizontally and let go of your drill or impact driver without it falling. If you love your power tool, you may still want to be ready to catch your precious tool just in case that stunt fails. This secure grip also means the bit holds the fasteners securely when getting them into position, all without a magnet. We love the simplicity of a single bit, particularly one that appears to perform as well as the UniGrip does. No more stripped screw heads, no more bit changes. We likey.

Aside from the business end of the head with it’s UniGrip design, Outlaw screws have other tricks in store. I was really impressed with its no-mess, no-hassle countersinking. I was able to precisely countersink the screw without any pre-drilling or countersinking. When I backed the screw out, an almost perfectly smooth countersink was underneath. Great stuff!

Like a retired swimsuit model, Outlaw screws have endured 1,000 Hour Salt Spray tests. They (the screws, not the retired models) will be available in both ACQ Coated or Stainless varieties. The only thing worse than your deck boards rotting is your screws rusting and breaking.

Self-Drilling Tip – Screwing Without the Foreplay 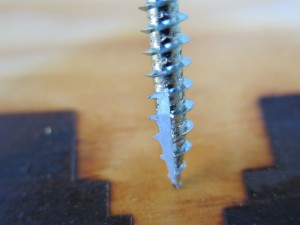 Who in the world likes to pre-drill for installing deck screws, or any screws for that matter? Not me. Happily, Outlaw screws have a wicked-sharp cutting head that eliminates the need for pre-drilling a pilot hole. I also found the screws (and wobble-free UniGrip) provide a highly accurate and precise screwing experience. There’s definitely no issues with a wandering tip with Outlaw. And, you don’t even need to cuddle them when you’re finished.

Self Cleaning – No Jacking 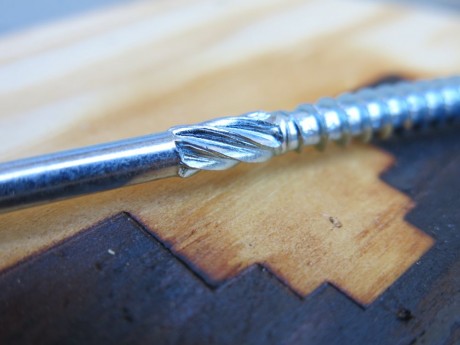 Outlaw Screws utilize what they dub BoardLock Technology to eliminate a common problem when installing decks: board jacking. According to Outlaw:

The Outlaw™ Deck Screws have the new “BoardLock™” technology featuring optimized thread length and a special ribbed thread located right above the screw thread. These high performance threads utilize 1/2 the length of the screw versus the traditional (and outdated) 2/3 of the screw length. The special ribbed thread feature cleans the deck board screw hole and allows the deck board to “lock” onto the joist without lifting. Combined, these two features create the “BoardLock™” technology that is utilized on all Outlaw™ Deck Screws.

It’s so easy to lose bits, we hope extra bits are plentiful and inexpensive. The last thing you want is to show up on a job and find you’re missing the one bit that fits all your deck screws. In a pinch you can use a hex driver, but your Philips, flathead or square drive bits are not going to cut it.

Outlaw Screws – The Future of Screwing? 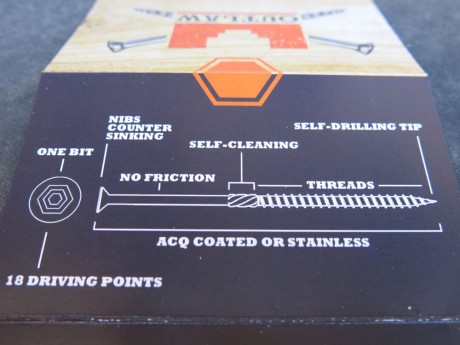 We’ve only used a handful of test screws and we definitely haven’t tested Outlaw Screws in an actual deck installation or other construction project. With that said, we think they have huge promise. I’d be thrilled to see them not only succeed with deck screws, but also with a full lineup of screws for tasks well beyond decking. Torx screws generally perform well, but they still require different bits for different screw sizes. And even Torx doesn’t offer the secure grip Outlaw delivers between bit and screw. Our fingers are crossed that Outlaw maintains a high standard on material and quality control in their production units which should lead them to great success. We think it’s a great concept.

Get Some – Deck Screws

If you want to be part of the Screwvolution, head over to their KickStarter page and back the project now so you can be among the first to Screw Outlaw style. After the Kickstarter project concludes (end of October, 2013), you’ll be able to find them on the Outlaw Fasteners website. Happy screwing!