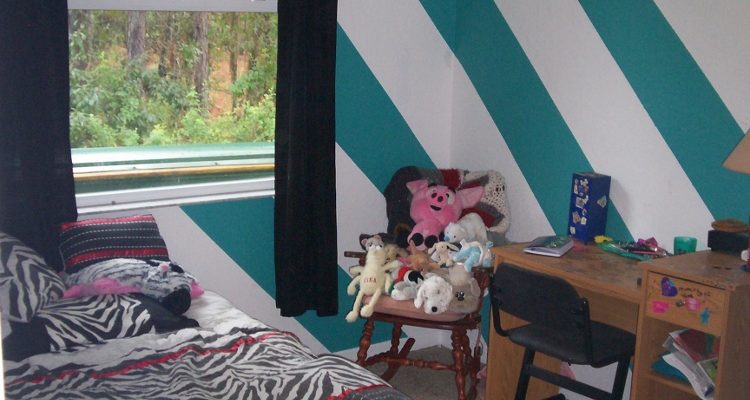 As any young teenage girl’s father will tell you, it’s almost impossible to please them – especially when you give them exactly what they want. So, when my teen daughter asked me if I we could paint her room, I realized two things right away. I knew the word “we” actually meant “me”, and, that no matter how I painted her room, she probably wasn’t going to like it very much once it was all said and done. When we went down to the paint store and started picking out colors from the swatches and she decided she wanted teal blue/green stripes, I knew I was in for some trouble. That was, until I got a hold of some Frog Tape to help my cause.

Zebras to Gum to Matching Outfits

I sometimes wonder if my daughter really is mine. I mean we look alike, we have the same color eyes and we definitely share the same DNA, but we certainly don’t have the same fashion sense. I dress fairly conservatively, while she tends to dress like a truck load of 80’s and 90’s clothes crashed together. It’s very bright to say the least.

With that said, when she picked out the bright teal blue/green color, I really wasn’t surprised. It definitely suits her style. But when she said she wanted teal zebra stripes to match her bed spread, I almost went into shock.

“That” I said “was probably out of my painting skill zone.”

“How about like zebra stripes gum?” she quickly retorted. Thin diagonal stripes sounded like too much cut in work with tiny paintbrushes and roller covers.

“Sounds tough. Maybe we can make them a bit wider?”

She pointed to the wide diagonal stripes on her blouse and said “How about like these stripes?” Done! Father/daughter paint negotiation completed. It sounded easy enough, and all I needed was some blue painters tape, right?

After we ordered up the paint, we took a little trip over to the painter’s tape aisle. That’s when I had a realization that made the hairs stand up on the back of my neck. I have some seriously textured walls that are going to make blue painter’s tape work about as effectively as having a caffeine junkie cut in with a watercolor paintbrush.

Knock-down lace textures are often reserved for the ceiling. Not in my house. This stuff is splattered all over every piece of drywall in the place. Conventional painter’s tape was not something that was going to work here. I needed something else and I had no idea what. Maybe after we got home, I could brainstorm up an idea to keep the stripes nice and straight with no bleeding. 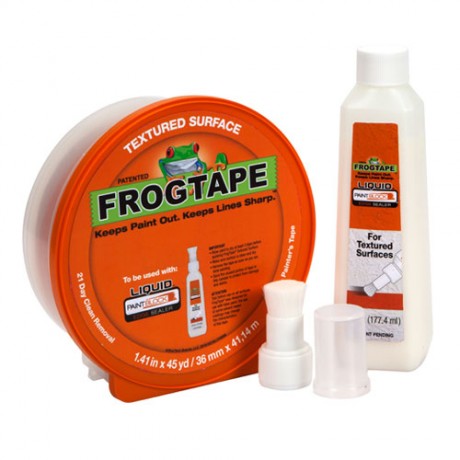 It was at this point Frog Tape (sponsor of this article) stepped in to the rescue. I’ve always used blue painter’s tape and I’ve always recommended it to others for all sorts of projects. Those days are long gone now that I’ve had the pleasure of working with the Frog Tape. In fact, I threw out the old blue stuff I had laying around after I got a hold of this painter’s tape.

Frog Tape provided us with their regular tape and a few samples of their Textured Surface Tape for our project. This product made quick work of the job and helped me produce straight, crisp and bleed-free lines on my rough and tumble wall texture.

Van Gogh Ain’t got Nothing on Me

Once I got into my daughter’s room and started moving stuff around to get ready for the paint job, I did feel a bit like chopping off one of my ears like Van Gogh. I discovered the perfect storm of papers, clothes and other junk stuffed under the bed and jammed in the closet. After pushing everything to one side of the room and filling a few garbage bags full of “stuff”, I was ready to paint, sort of. I had to lay out the tape for nice and even stripes. 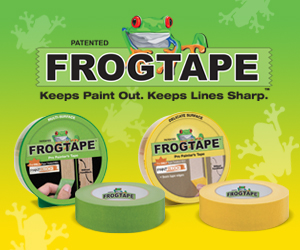 To get parallel and even lines on the diagonal, I used a simple process called storyboarding. Basically, you take a board (in my case I literally used a 1×12) and use that for your repeating layout so it remains consistent. I used the door trim to help hold the board in place to create the first reference line for the first piece of Frog Tape.

I put a piece of tape on each side of the board, then moved the board down the tape and repeated the process. A few well-placed thumbtacks helped hold the board at the right spot while I continued with taping the walls. Sure, I could have used a string line, or just marked offset intervals on the top and bottom and then stretched the tape between, but I liked the solidness of storyboard technique. It also ensured I was applying the tape straight as it’s easy to get accidental curves when free-handing painters tape.

Glue It To It with Frog Textured Surface Tape

This is where Frog Tape takes the lead far and above any other so-called textured surface painter’s tape. After you firmly adhere the painter’s tape to the wall, a bit of glue-like liquid is applied to the edge of the tape to prevent bleeding.

First, a quick pass with a damp cloth is needed to help the glue adhere. A small brush tipped applicator is provided in each pack of tape and after a quick shake, it’s applied to the edge of the Frog Textured Surface painter’s tape. After a 15 minute dry time, the paint is ready to be applied.

Once you’re satisfied with the paint job, you can immediately remove the tape. I was surprised to find that once I had everything painted and after I removed the tape, I had unbelievably straight, bleed-free stripes on the wall. I was proud of the result, but my hard-to-please teenage daughter was even happy enough with the end result to show it off to all of her friends.

Two things I made a mistake on when applying the tape. One: I accidently put the glue on both sides of one piece of tape. That’s a no-no and made a glue line visible where the paint was not going to be applied. As long as you keep the glue on the painted side of the tape edge, you’ll have no troubles.

Problem two was also easily prevented once I found out what I was doing wrong. If you remove the tape towards the painted part of the stripe, you’ll end up ripping up some of the paint if you’re not careful. Pull the tape off of the wall AWAY from the painted edge and you’ll get a sharp break every time.

Thanks to Frog Tape for sponsoring this article. Frog Tape offers Multi-Surface, Delicate Surface, Textured Surface and even Shape Tape (with Wave, Chevron and Scallop designs) to maximize your creative painting options. Oh, and If you tackle any creative painting projects like this, please let us know in the comments below.