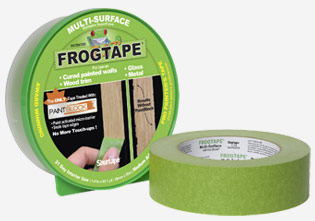 We’ve all been there. Standing at the paint store, complimentary stir-sticks in hand, gazing woefully at rows of masking tape. Since it’s hard to tell one roll from another, manufacturers have cleverly resorted to coloring their tapes to set them apart. There’s the old beige masking tape you grew up with as a kid. Let’s face it, it usually sucks. Lots of tearing and bleed-through. Then there’s the ubiquitous and somewhat pricey blue painter’s tape. It’s OK, but leaves some room for improvement when it comes to clean lines. Then there’s Frog Tape, the painter’s tape that followed Geico’s lead and employed a small green critter as a mascot. If you’re like me, you’ve probably stood in front of those rows and thought, “when did masking tape get so expensive?” Frog Painter’s Tape also tends to be a step above even the blue tape in price. So is green Frog Tape worth your hard-earned greenbacks?

Almost a year ago now, Shurtape (who sells Frog Tape and one of my favorite versions of Duct Tape), sent us a big stash of Frog Tape and some T-Rex Duct tape. Yes, I said almost a year ago. That’s exactly how long I’ve been procrastinating painting our kitchen, 1/3 of which was still unpainted from what I used to call a “recent” remodel project. Yes, my wife is very patient. Finally, with a Fourth of July party looming, and with embarrassment growing for being so slow in my review for Shurtape, I took the plunge last weekend and started prepping to paint. It was time to put the little froggy to the test.

First, let me confess. Although I love DIY and Home Improvement, I don’t have that same love for painting. I was sharing that lack of love for painting with a colleague recently, who replied, “Oh, I LOVE painting. I really pride myself on cutting in perfect lines with a brush. ” Great, thanks for rubbing in your superior painting skills. I then complained about painting to my friend Mike over at the ICBE.org, who volunteered, “One question: Did you use any masking tape? Because masking tape is for rank amateurs.” Clearly my friends are better painters than I am. Relying on a steady hand for yards and yards of cutting-in around my prized wood windows just isn’t something I do. Besides, I had to cover my windows and doors with plastic anyway (to keep roller splatter off them), so why not rely on a little painter’s tape for the edges? I’ll tell you why, because normally most masking tape or painter’s tape rips, and it bleeds paint like crazy. 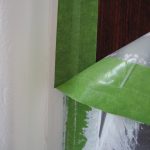 That’s where Frog Tape comes in, promising to be a cut above competing painter’s tapes. After using several rolls of Frog Tape I came to some conclusions. One, is that the tack strength on Frog Tape is pretty high. It’s described as “medium adhesion”, but I would definitely recommend caution on any surfaces that you might accidentally pull up old finish with. In fact, most of the reviews I read that were negative about Frog, were related to the adhesion being too strong. If that’s a deal-breaker for you, you’re in luck. Frog Tape now also makes a low adhesion painter’s tape (it’s yellow, not green though). Definitely worth considering if you’ve got any paint or finish that isn’t very solidly bonded to the surface below. If you ever find the tape you’re using is pulling up finish, consider this tip from Shurtape: try softening the tape’s adhesive with a blow dryer before pulling it up.

Another conclusion I came to is that Frog is stronger than many, but maybe not quite as strong as I’d like. A pet peeve I have is masking tape tearing during removal. It’s such a buzz-kill. You’re moments away from glory, with only masking tape standing between you and the glorious unveiling of the masterful new paint job you’ve produced. You pull on the masking tape and, rrrrriiiiippp, it tears into a long sliver that then requires razor accurate surgery with a utility knife to remove. I found Frog Tape to actually be a bit stronger than most of the masking tapes I have used in the past, but it wasn’t completely immune to ripping. If the tape was about 10-20% more rip resistant, I’d likely consider it the perfect masking tape. 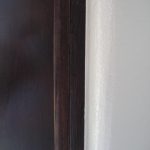 Now before everyone gets all kukoo for Coco Puffs about Frog Tape, let’s be realistic. If you’re masking a really rough or textured surface, relying on any kind of painter’s tape alone is probably not a great plan. Paintable caulk and masking tape can work well in that situation. And, as good as Frog Tape is, it’s not perfect. Even though I was very meticulous about really pushing down on the tape during application to create a tight seal, there were some surface irregularities that still caused a little bleed. However, when I compared the results to a project in another room done with the blue stuff on the exact same materials, the room I used Frog Tape on had noticeably cleaner lines. For me, the cleaner, more professional looking result would be enough for me to justify paying a little extra.

One question I have for Frog Tape is what gives with the plastic tape containers? My guess is that it’s to protect their magic Paint Block technology from being activated before the tape gets applied. However the skeptic in me thinks it’s a marketing strategy to set it apart as a premium tape. Couldn’t the tape be protected with a layer of plastic wrap like the other tapes? Maybe the folks from Frog Tape can chime in via the comments below and let us know? The plastic tree hugger in me would like to see a refill option where you can buy Frog Tape sans the plastic case.

So if you don’t care about clean lines and a near perfect tape seal, by all means go with cheaper tape. But if clean lines are what you’re after (and you’re not one of those DIY paint pros that sees painter’s tape as a crutch for less skilled painting Neanderthals), by all means spend a little more and get great results with Frog Tape. I think it’s an excellent product, and is probably the best painter’s tape / masking tape currently on the market. You can find a variety of Frog Tape at your favorite paint retailer, or starting at around $6/roll on Amazon: