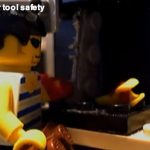 Our friend Tony Saucier over at PoundedThumb.net recently turned us on to this power tool safety video. It’s an industrial tool setting, but we think the safety lessons learned apply just about anytime you’re using power tools. Just try to ignore the fact that the safety tips are being taught by a couple Lego people with really, really bad voiceover work.

Ok, so the first Lego man amputates his arm via some sort of belt sander. I have to say, that must be one very industrial belt sander to sever an arm so quickly. We’ll just chalk that up to poetic license on behalf of the producers of this fine film. The message of this video (which is handily transcribed at the end of the video) is if someone needs to talk to you or is going to distract you while you’re using a power tool, either ignore them, or safely shut down the tool and then say, “Dude/Dudet, what do you want from me?! Can’t you see I’m using a power tool here?”

I generally agree with half this advice, and even then, there are always exceptions. The half I don’t agree with is actually ignoring someone trying to get your attention. Let’s say you’re using a reciprocating saw and you’re about to cut through load-bearing timber that supports the massive roof above you. In that case it might be good to pay attention to the person waving at you frantically. Or maybe you’ve just licked your hands, are standing barefoot in a pool of water, just got braces for your teeth, and are about to cut into a wall that someone realizes has live high voltage inside. Again, another good time to pay attention. I guess common sense applies here, but I’m not one for ignoring my surroundings entirely while using power tools. You want to be focused, but you also don’t want to be oblivious to potential dangers around you (whether it’s at home or on a job site).

So if anyone ever interrupts your power tool use and it’s not for a REALLY good reason, sit them down in front of this YouTube video and scare them straight with the graphic Lego amputation scene. Lesson learned, and hopefully everyone still has all their extremities.