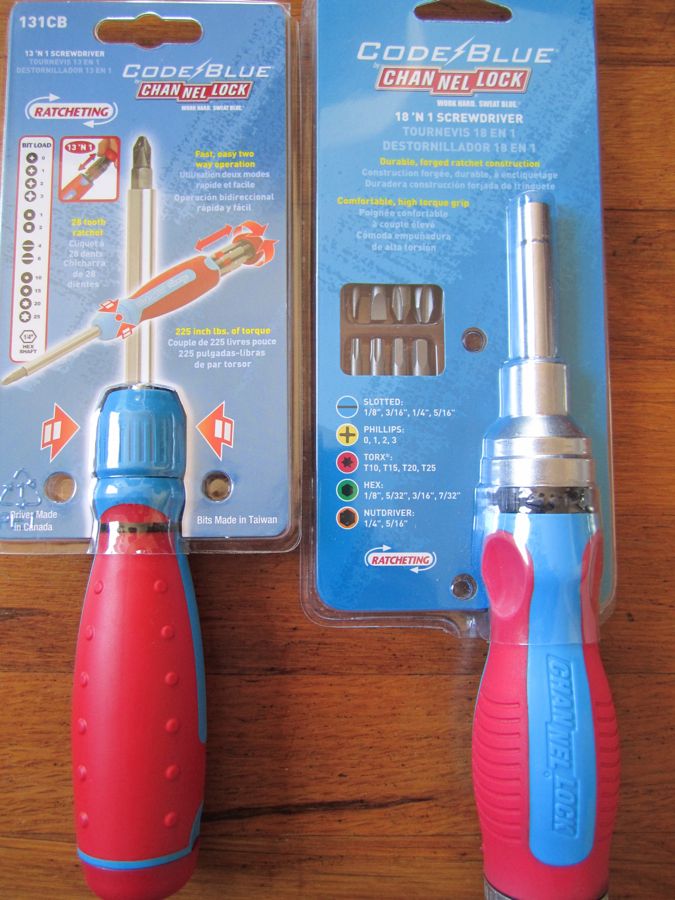 I’ll admit it, it’s been a while since since I’ve screwed. You know how it is. You have kids, work cuts into your “recreational” time, you have a headache. All the usual suspects. The next thing you know though, a home improvement project comes up that can’t be ignored and you suddenly find yourself screwing at all hours of the day and night! It had been so long, I kinda forgot about how good it can feel. Especially with a good screwdriver. Or, even a snazzy new ratcheting screwdriver like the Channellock Code Blue 13 ‘n 1 and 18 ‘n 1. They’re the latest tools to show that Channellock isn’t exclusively into just wrenches and pliers these days. Yup, they’re into screwing now too!

I’m either old school or high-tech when it comes to screwing. I typically use either a normal screwdriver, or cordless drill / impact driver. One advantage I noticed right away relative to the old school traditional screwdriver is that thanks to the ratcheting action, you don’t need to change your grip or hand position. This means you can dedicate your non-screwy hand to stabilizing the screw, or holding whatever you’re screwing in place. It also means you’re not wearing out your palm with unnecessary friction. We all know some friction is good, but too much friction results in things like blisters. The last thing you want to develop while screwing is a blister. The ratcheting action also gives you the option of locking the ratchet so you can fine tune that last turn without blasting through the screw like you might with a cordless driver. The ratcheting screwdriver, like these two Code Blue models Channellock sent to us, provide a happy medium between old school and cordless. On a side note, we’re not convinced Code Blue is great branding on these, especially for anyone with a medical background. The Channellock 18 ‘n 1 gives you a lot of options with slotted, phillips, Torx, hex and two nut drivers. In terms of build, the handle feels beefy, but the ratchet mechanism feels a bit coarse and imprecise. I’m also not a big fan of the plastic threads on the body of the driver where the bits are stored. Although the cap itself is metal, the threads it go onto are plastic. In our experience, plastic threads don’t hold up very well long term, especially when they’re interacting with metal regularly. I also ran into the bit holder shaft jamming a couple times, making it hard to pull out or push in a new bit. On the plus side, the 18 ‘n 1 has a solid ergonomic grip which gives you a lot of torque. There’s even nice depressions for your thumb. 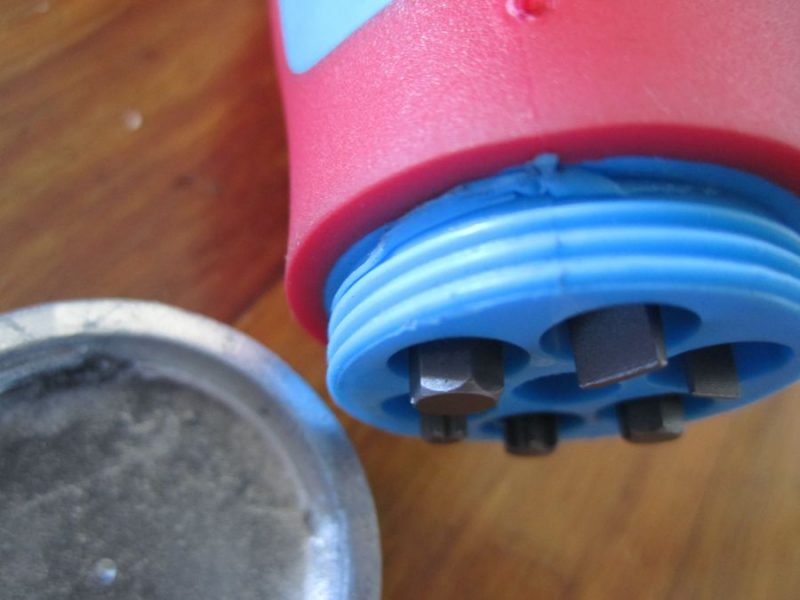 The ratcheting mechanism has three settings including righty tighty, lefty loosey, and one where you can lock it in place old school style. The 18 ‘n 1, as you might have guessed has a solid collection of bits. I was also happy to see a couple small slotted and Phillips bits which come in very handy sometimes when your tinkering on parts that have smaller screws. 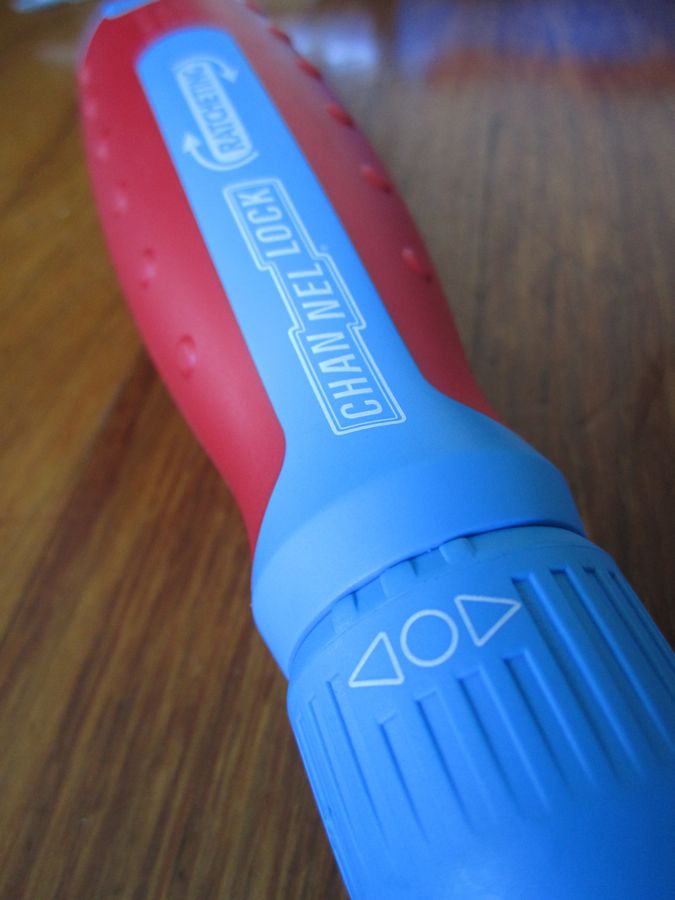 Let’s move on to the 13 ‘n 1, which has a more refined feel to it. The grip still feels pretty ergonomic, although it’s a bit slimmer and minus the thumb depressions of the 18 ‘n 1. I like how the ratcheting mechanism makes up the whole front part of the grip, making the switch easy to rotate either way. I also like the bit storage which slides out of the grip and rotates like a screw-bit Gatling gun. The rotation lets you see and easily access each bit. Channellock again includes a nice assortment of bits, including some square drive bits which never seem to be around when I need them. It also includes Phillips, Torx, slotted and a quarter inch hex shaft. Thanks to a quick and simple slide-out design, there’s no worries of plastic threads stripping out. 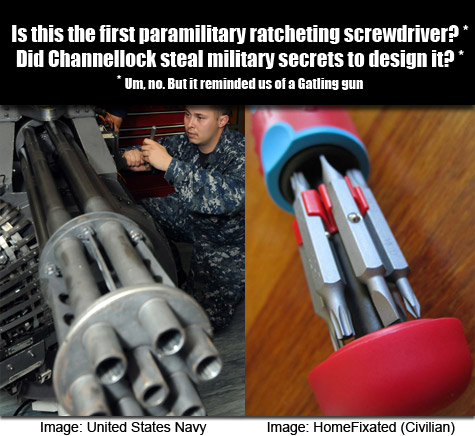 Both Channellock ratcheting screwdrivers suffer from an issue common to combo screwdrivers, the bit often pulls out of the driver when withdrawing it from whatever you’re driving. In this particular issue, an old school single screwdriver still has the advantage. Naturally, the 18 n 1 is way better than the 13 n 1, right? I mean it’s got five more bit options! Not so fast. I actually prefer the 13 n 1’s Gatling gun bit storage system. The switch for ratchet direction is also more accessible and user-friendly. And the ratcheting mechanism just feels smoother. The 18 n 1 does have that slightly beefier more torquey-feeling grip, plus several additional bit/driver options. Assuming it has the right bit, I’ll reach for the 13 ‘n 1 more than the 18 ‘n 1. Interestingly the 18 ‘n 1 driver is labeled as made in China while the 13 ‘n 1 driver shows the driver made in Canada and the bits made in Taiwan.

We find these ratcheting drivers with lots of bits very handy to throw in the glove box, or in a tool bag or belt you don’t want to clutter with a bunch of separate drivers. If you’d like more screwing in your life, you can find the Channellock 18 ‘n 1 Screwdriver for about $17, and my preferred 13 ‘n 1 for about $33 straight from Channellock.com.