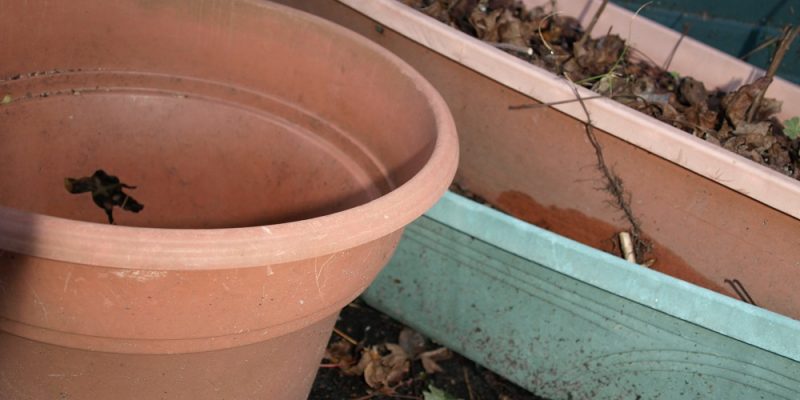 Gardening pots can easily be reused if their occupants die or they outgrow the container in question. But you’ll naturally want to avoid bestowing any lingering diseases or germs to the container’s future denizens. So, without further ado, here are some excellent tips for keeping your containers sparkling clean and storing them when they’re not in use.

The first line of business is to remove both weeds and plant detritus from the surface of the planter in question. After all, weeds beget more weeds and any sickly leaves that fell could harbor diseases. Either one of these could cause problems in the future if allowed to remain in the removed potting soil. Unless the dirt is causing deformed roots or is harboring an ant bed, I usually refurbish it for future use. This can easily done by putting the soil in large plastic bags and adding in fertilizer, compost, and other nutrient rich materials. But that’s a subject for another day.

Before cleaning up the containers, you’ll want to take a moment to inspect them. Any pots that are severely damaged should probably be discarded, unless you don’t mind them leaking expensive potting soil like they were made of Swiss cheese. It’s also a possibility that super holey containers won’t hold enough water to keep the roots of the plant in question from drying out. This might not be a problem if the pots in question are holding cacti and succulents, but could be bad news for alpine strawberries. (I speak from personal experience on the latter score.)

Although the terracotta pots I duct taped back together have mostly worked after the fact, they do dry out faster than similar containers. One of the alpine strawberries I put in them survived and one didn’t. This means that using questionable containers might be worth the risk if it is midsummer and you’ve been reduced to putting plants in leftover soup cans with holes poked in them. But, for the love of all that is holy, don’t put your $50+ plant in a damaged planter. Like in the Hunger Games’ arena, the odds won’t be in your favor. It’s a well-known, highly scientific fact that the more you spend on something the more likely it is to die and cause copious amounts of stress. At least that’s been my experience.

I’ve read a lot of articles that recommend using bleach and water mixture in a 9:1 ratio in order to sanitize containers. However, bleach is a highly  toxic chemical. To me, that is. The burden of being allergic was such that I initially ended up scrubbing my pots down with plain old soap and water. No doubt this kills some germs and bacteria. At any rate, the plants I grew in those containers (tomatoes and garlic) turned out perfectly fine. I next tried a combination of water and hydrogen peroxide, which also seemed to work in keeping problems at bay.

Once you’ve got your cleanser mixed up, it’s time to scour the containers. Small pots can easily be dunked in the bucket containing the disinfectant and washed there. You’ll want to use a tough bristled brush to get rid of the funk that builds up on them. (Yup, they’re clearly 90’s grunge pots!) Be sure to change out the cleaner when the mixture starts looking like a potential habitat for The Swamp Thing. For larger planters, you’ll need to frequently dip the scrub brush in the cleanser and scrub them until all the gunk is loosened. Finally,  rinse both large and small pots with clean water. Let them air dry in some place where they won’t get dirty again.

The author of this article, whose blog I read regularly, mentions that she uses vinegar to get rid of stubborn mineral deposits on her planters. I think putting plastic pots in the dishwasher and clay ones in the oven for a set amount of time as Ms. Elliott suggests would certainly kill any lingering contaminates, but that particular method probably wouldn’t work well  for very large containers.

Once the containers dry, you can then neatly stack them by size and type. Or, you can be haphazard about it. Just be careful with odd sized pots. I’ve broken more than I care to admit by getting them stuck together somehow. Common sense states that you also shouldn’t store your containers where they might freeze. Terracotta is especially prone to cracking in areas with harsh winters and plastic can get brittle when the temperatures drop. The few ceramic containers I have seem impervious to the cold but I’m not going to do more than speculate on them because I only have a handful of truly nice containers. However, I do know for a fact that Styrofoam planters can stay outside all winter with no ill effects.

Have any gardening container thoughts I missed? Share them in the comments section below!