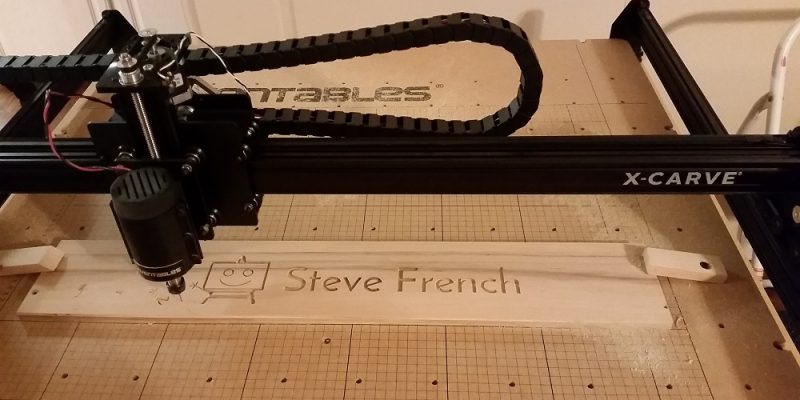 There’s been a debate brewing for several years now among hobbyist woodworkers: Can CNC machines be used in “real” woodworking? Let’s explore this! For those residing under rocks, a CNC (Computer Numerical Control) machine is a computer-controlled, motorized, multi-axis assembly with a cutting tool of some sort mounted to it. In the context of woodworking, the term generally refers to an X,Y,Z table outfitted with rails, a gantry that spans the rails and a router (or similar) motor. A collet on the motor’s shaft holds a rotary cutting bit, which cuts or carves out whatever the computer programs tell it to. In a nutshell: it’s a woodworking robot.

As a hobbyist who’s active in the online woodworking community and a local woodworking club, I’ve encountered those musing over this deep philosophical conundrum, often in a scoffing tone. Some love the idea; some despise it. Few seemed to occupy the middle ground, until the past year or so. Let’s consider some of the positive aspects of CNC and whether it can serve a legitimate role in the home workshop. But first, let me very briefly discuss CNC’s most notable attribute: a very high level of precision. CNC machines are capable of very high precision. Whew, that was easy! Let’s continue.

Perhaps it’s neither; or both at once. It strikes me as odd for someone to have an antagonistic attitude towards the use of a creative tool (similar divides also exist concerning both pocket hole screws and biscuits and whether they are “real” joinery or not). But some do feel that using a CNC machine as a woodworking tool is essentially cheating. I’ve heard a number of arguments against the technology and they usually boil down to a fear that it will cheapen the art of handmade woodworking. I find that to be a weak argument; at least on the surface. So here’s my weakest, most basic rebuttal: Something manufactured by machine isn’t handmade work. It’s like comparing an original painting to a print. A million prints of a painting doesn’t make the real painting any less genuine. In fact, they may actually make the real painting even more special, more desirable, more valuable.

Perhaps the issue isn’t quite that simple though. I can’t ignore the fact that a glut of machine made products does indeed dominate the market, reducing the need and desire for handmade items. So it’s easy to see why those who create handmade crafts might feel threatened by the adoption of wage-less robotic workers, tirelessly churning out perfect copies. But the industrial moguls and their factories aren’t going anywhere, whether we approve or not. There will always be trinkets available at the big box stores for less money than we can even make them for. That’s a battle we’ll never win.

You down with CNC? Yeah You Know Me!

Narrowing our scope to only the home workshop, does CNC really cheapen handmade products? I see the issue as having three main facets: moral, economic and aesthetic appeal, all three of which are subjective. Some people try to pass off items they made via CNC as “handmade”. Other times, they may employ ambiguity and only clarify when directly asked. But, the fact that people can misrepresent their work is only a valid case against lying: not against CNC technology. Of course it’s best to be truthful about the items you make, whether you’re selling them or not; your credibility is at stake. And never enter CNC work into a contest unless you’re sure the rules allow it. But then there are also times when making the distinction may be of no real value, concern or obligation.

If one makes a jewelry box and uses a CNC machine to create an inlay on the lid, is this person doing “real” woodworking? Sure, I’ll grant that they are. Did they do a “real” inlay? Yes, of course. Did using CNC take less skill than using a router and template? Now we’re getting into a gray area. BOTH methods may – in reality – require the same level of competence, albeit, completely different skill sets. With either method, the craftsman is performing a single operation out of the many required to complete the overall project. Does the chosen tool make it any less valid?

The end result is sometimes more important than the method. Consider, for example, signs and plaques. Woodworkers often find themselves making signs. Those signs may be for paying clients who don’t care about hand made; they just need a sign and want to pay your lowest price. For them, it’s a utility item and not an art piece.

As for aesthetics, people buy what they like, usually with little regard to the method of construction. That said, there will always be a market for actual handmade items.

One thing I find CNC machines particularly valuable for is creating templates. If I’m trying to batch out dozens of a particular part, I often use a template. The template may be a photocopy of my pattern that I spray glue onto the workpiece. Other times, I’ll create a hard template out of tempered hardboard, card stock or acrylic sheet plastic. The template is used like a stencil. Trace the template and your workpiece is laid out and ready to be cut. A CNC machine makes templates easily and super accurately. Some people buy router templates (often at high prices) for making serving trays and other projects. Why buy stencils and templates when you can make your own (and size them to suit your needs)? Surely one isn’t going to argue that using CNC in this way is “cheating”.

Another thing that some woodworkers purchase for their projects are embossed wooden appliques, or “embossed moldings”, as our sponsor Rockler Woodworking and Hardware calls them. I’ve seen these things used on all kinds of projects, such as fireplace mantels, headboards, architectural trimwork, clocks, picture frames and much more. Personally, I don’t like them for the same reasoning many people apply to CNC: it’s not “real” woodworking to glue on a fake carving that you bought. But that’s just me; many people like them just fine. I wouldn’t feel bad about it though if I made the same things on my CNC. And if I were to, I could scale and customize them as I see fit. Honestly though, I make toy cars using factory produced wooden wheels, so I don’t even always follow my own rule. Where to draw the line? I’ve even seen people who are against CNC machines in the home workshop use these things, which boggles my mind. If CNC is cheating, these are definitely cheating! But really – outside of contests – is it even possible to cheat when making a project? What does that even mean?

The Lowdown on the Hoedown

The many answers to whether CNC work can be considered real woodworking or not fall along a gradient. There’s no clear cut delineation to tell us what percentage of CNC work demotes a project from hand made to machine manufactured status. I will, however, boldly dare to assert that a project made exclusively by CNC is not real woodworking, even by liberal standards.

Clearly, the argument is far from settled. But, one should have pause before dismissing CNC as the evil antithesis of woodworking. Just because using it – in and of itself – isn’t necessarily “doing woodworking” doesn’t mean it can’t be a perfectly valid addition to the shop and an honest way of performing a step or two during the build process. Rebellious arguments were also raised by some craftsmen at the end of the 19th century, when power tools were invented. Eventually, most realized that more efficient, more accurate tools are a good thing and they became staples in nearly every modern workshop. CNC machines appear to be on that same path. Embrace your power tools – but not while they’re running – and they will imbue your shop with functionality, versatility and awesomeness. You do want your shop to be awesome… Right?

What do you think? Can CNC machines be a part of “real” woodworking? Weigh in on the topic in the comments below.

And, if you’d like to get started with CNC, our sponsor Rockler Woodworking and hardware has options starting at $1600, and Inventables.com is also another great resource: