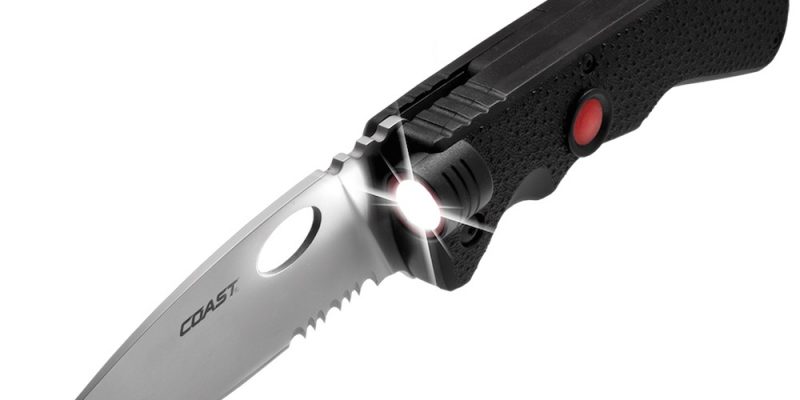 There is something to be said for doing just a few things, but doing them very well. Coast tools makes multitools, knives and flashlights. That’s it. In fact we’ve reviewed them in the past with this flashlight and headlamp review, (both still holding up great long-term). With their focus, Coast is very good at what they do. So, I guess it comes as no surprise that somebody there decided to put a knife and a flashlight together, kind of like the Reese’s peanut butter cup of survival / utility tools!

The new light up knife is the Coast LK375, which was provided to us by Coast for this review. It isn’t “flashy”, but it’s functional. It is a chunky, black survival knife with a small LED flashlight built right into the handle. The light is powered by a single AAA battery, and even though that is pretty small, it adds a lot to the size of the knife. The light is BRIGHT though! It’s no whimpy pen light. It throws 110 Lumens with a range of 173 feet according to Coast. The light is waterproof and has two brightness settings.

Coast is also known for their knives, and the knife in this package is also pretty nice. It is notched for right or left thumb opening, and has a serrated section for fast ripping. The blade is made of 7Cr17 stainless steel, and it has a liner lock to keep it locked open. Check out this prior video if you’d like more insights into folding knives and their various locking mechanisms (including liner locks).

Where the great light and great blade come together, it’s a little bit disappointing to me. The case is polycarbonate coated stainless with a pocket clip on one side and the light button on the other. It just doesn’t feel great in my hand, and does not fit well in my front jeans pocket as a “clippie.” They have done their best to bring the components together seamlessly, but in the end, it’s a little bit clunky. That said, I don’t think this tool is really meant to be carried as an everyday knife. Even though it has a pocket clip, it’s more suited to clip on a tool belt or carry in a backpack, glove compartment, or even in the sun visor in your car or truck. This tool would be perfect to set up a campsite after dark, or in a pinch, cut a seatbelt in an emergency after dark. As an emergency / utility tool, the LK375 really “shines.” However, because it does still have a sharply pointed tip, it is likely not intended for seatbelt cutting.

I don’t want to be too hard on the Coast LK375. However, I think that a customer needs to have a clear idea of what this tool is… and is not. If you are a person who likes to own a lot of job-specific pocket knives (like me) this is a great addition to your collection. The light combined with the knife makes it extremely handy in a multitude of low light situations. If you are looking for an everyday carry / EDC knife, then maybe not so much. You can find the Coast LK375 Light Knife on Amazon for around $40, with largely favorable reviews.