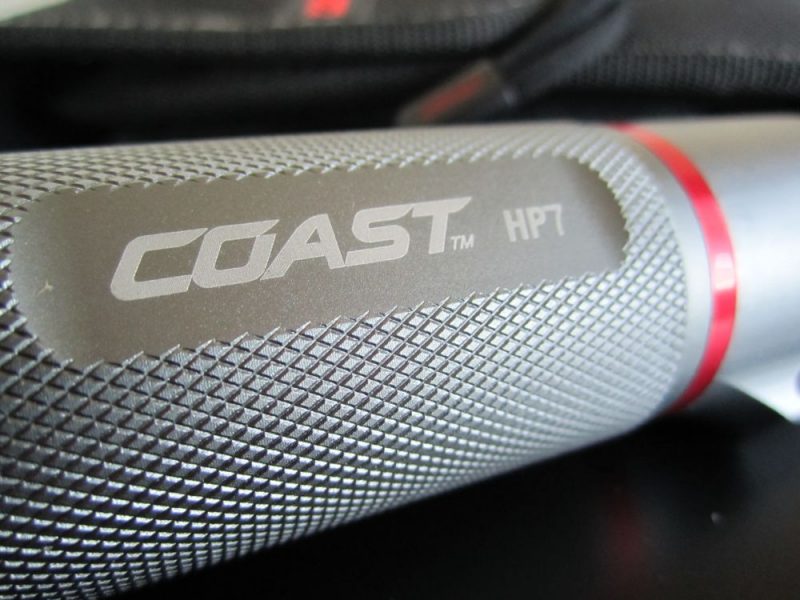 I was an early adopter when it came to LED flashlight technology. Like most early adopters, I also experienced some of the inadequacies of the first few rounds of products. I still have a LED pen light I bought eons ago that was just slightly brighter than a match. Even the cool and versatile Joby GorillaTorch we reviewed left a bit to be desired with a CREE LED that was blindingly bright at the center of the beam, but much dimmer around the perimeter. When Coast sent us their HP7 LED flashlight and their HL7 Headlamp I expected to see similar limitations. While LED has huge advantages in terms of efficiency and durability, beam and light quality just wasn’t an area I’ve been impressed with.

After a short time using the Coast HP7 and HL7’s, it became clear to me: LED technology has evolved. Unlike most LED lights on the market, Coast’s HP7 Flashlight and HL7 Headlamp feature what Coast calls Pure Beam Focusing Optic. What that translates to is an ability to focus the beam from a very wide, extremely evenly-lit beam, to a much more focused and brighter beam with a very bright center. If you don’t think that’s a big deal, you’ll be amazed at how often you’ll find yourself adjusting the focus of the beam to suit your particular task. From a nice wide, even beam for navigating through a dark area, to focusing a bright beam on that scary noise you thought might be a Chupacabra stalking you, Coast has you illuminated. 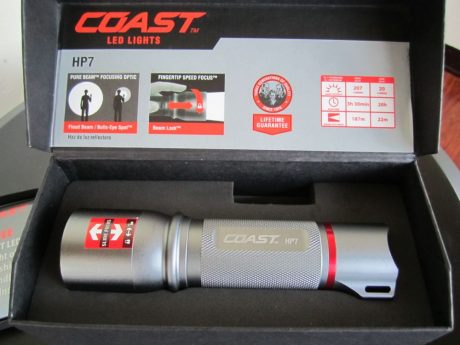 The HP7 is a compact 5 1/2″ long and is powered by four (included) AAA batteries. It weighs in around 7.2 ounces with the batteries and is designed to be water and impact resistant. Coast also goes the extra mile with details like a rugged belt holster for the HP7. All LED flashlights are not created equal; let’s talk details.

Aesthetics
It’s clear Coast is pretty serious about design. I was impressed with their attention to detail, right down to the way the package their products. The HP7 is available in both Titanium or Black color configuration, both with the distinctive Coast red ring towards the base. I personally prefer the black (I guess I’m a traditionalist that way), but then again, the titanium color HP7 Coast sent us is a little easier to spot in dim light. A textured mid-section keeps your flashlight in your hand rather than on your floor. There’s also a lanyard loop milled into the base (and Coast thoughtfully includes the wrist strap). That lanyard ring also serves a dual purpose of preventing the flashlight from rolling much. Unscrewing the o-ring sealed base, you’ll find a plastic magazine that holds the four AAA batteries. I personally prefer to avoid extra components, however I’m guessing they designed the battery carrier to secure the batteries and ensure a solid electrical connection. Overall, the HP7 is a sleek looking flashlight.


Ask your favorite SWAT-team member and they’ll tell you the power button is a pretty key part of flashlight design. Too rigid and it’s hard to power on. Too accessible or easy to press and you’ll be lighting things up when you least expect it (typically when the light is aimed right for your eyes). The Coast HP7’s power button is in the recessed base. Coast milled out two divots to the sides of the button to make pressing the switch with your thumb easier. The button is protected enough I didn’t have any accidental presses, but also accessible enough it’s easy to power on and off. The HP7 has a very handy “quick cycle switch” that enables you to switch between the high output 251 Lumen setting to the low output 58 Lumen setting.


Without focus, you may as well wave around a candle. Controlling that powerful LED bulb is where the HP7 (and HL7) really shine. The Fingertip Speed Focus action on the HP7 is smoother than a baby’s bottom (and far less poopy too). I found the easiest way to adjust the focus was with my thumb and forefinger. The focus action is so finely machined you can easily adjust it with the same hand that’s holding the light, making for quick on-the-fly adjustments. 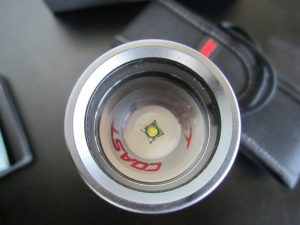 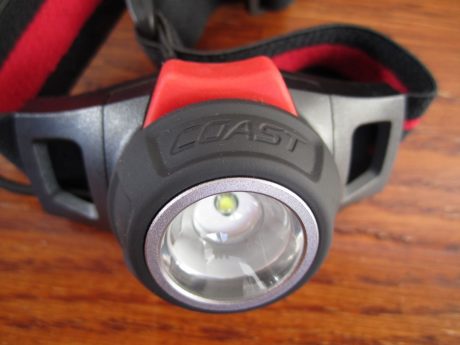 The Coast HL7 features a 3 AAA battery pack housed in a rubber covered case that resides on the back of your head. That same case also has a dimmer switch which enables you to got from barely lit to blazingly bright. A hinged bulb housing lets you aim the beam further down, but not up. Coast also includes a very useful neoprene belt pouch, which is great for someone obsessive like me. . . the HL7 and it’s strap, battery case, etc. all pack up nice and tidy. My HL7 has now accompanied me on several trips to the crawl space and the attic, making all the creepy-crawlies easy to see and keeping my hands-free every time. If you haven’t used a headlamp for projects around the house, you will be amazed how much more productive you are when you’re not fumbling with a light.


The HL7 opts for a single headband design. If you’re used to a simple design like the Petzl Tikka Plus, you’ll definitely find the HL7 to be a bulkier product. Then again, it’s also a brighter and more versatile product. For quick headlamp tasks I still prefer an ultralight design like the Tikka Plus (where the batteries are housed in front with the bulb). With minimalist headlamps, there’s very little mass and it’s just easier and more comfortable to slip on and off. Although the front of the HL7 has a pad on it and the back battery pack is rubberized, I didn’t exactly find the HL7 ultra-comfy. My advice is to wear a hat with it. If you’re going to be doing a lot of bouncing around (riding a kangaroo in the dark?), keep in mind the Coast HL7 does not have a top strap to keep it from sliding down your dome. If a secondary strap is a requirement for you, some of Coast’s other headlamps do have that option. Since I wasn’t cowboy-riding kangaroos, I didn’t have any issues with the headband slipping down.


You might think adjusting the focus on a headlamp is a cumbersome process, but Coast made it remarkably easy with the HL7’s large, rubberized focus ring. Focus adjustment was very easily do-able, even with a gloved hand. As with the HP7 Flashlight, I found myself adjusting focus frequently to suit whatever application I was working on. Again, Coast’s focusability was a standout feature.


Both the Coast HP7 LED Flashlight and the HL7 LED Headlamp offer great illumination and solid performance. With so many cheaply made LED products on the market, I was impressed with the feel and build quality of both lights, but in particular the HP7. It’s aluminum housing is precisely milled, and the slide-focus is silky smooth. While the HL7 wasn’t the most comfortable headlamp I’ve worn, what it lacked in comfort it made up for in versatility and performance. Its fully variable “dimmer” switch lets you dial in the exact amount of light you need and maximize battery life. Both LED lights are backed by Coast’s lifetime guarantee against defects in materials and workmanship. The Pure Beam Focusing Optic feature alone make the HP7 and HL7 infinitely more useful lights than most LED’s on the market.

for just over $50, and the Coast HL7 Focusing LED Headlamp

for just over $40 on Amazon. For only a few bucks more, it’s worth considering the New Coast LED Headlamp HL7R Rechargeable Version

if you don’t like the hassle or eco-footprint of buying replacement batteries.