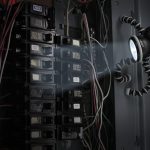 At this year’s National Hardware Show, one unexpected surprise was running into Joby, makers of the handy little Gorillapod flexible tripods used for everything from point-and-shoot cams, to camcorders, to iphones (with their Gorillamobile product line). I’ve used a Gorillapod enthusiastically for quite some time, so I was happy to see them at NHS showcasing the Gorillatorch. For those of you that just finished up watching Lost, you might be thinking this is an actual torch. Lost episodes made use of so many torches I kept mistaking certain scenes for the Olympic opening ceremonies. Anyway, to clarify for Lost fans, Joby wisely nixed the open-flame option and decided to go with the more conventional battery operated light for the Gorillatorch. But the battery is about the only thing that is conventional about the Gorillatorch.

I have a friend who wears a headlamp all the time. . . and no, he’s not a surgeon. He wears it when taking out the trash, he wears it to spot wildlife in the yard at night, he wears it around the house, and he wears it dumpster diving. Yes, I have friends that dumpster dive. This is Southern-California-suburban-gated-housing-dumpster-diving though. If you knew the untold riches he has discovered, you would stop laughing, grab your headlamp and start diving yourself. Maybe. Anyway, this friend convinced me headlamps are the best thing since cordless tools were invented. So I went to my local REI and bought myself a Petzl headlamp. It was a great purchase, but lets face it, there are times when you need portable light and a) you don’t want to look like a geek b) you don’t want a light attached to your head and c) you are trying to avoid “headlamp hair.” 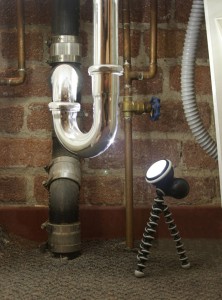 Move over headlamp, this is where Gorillatorch steps in. Scott Ellis of Joby, gave me a quick run-down of features (along with a sample to take with for the review), and I was already impressed. One super feature they added to their earlier Gorillapod design was the addition of magnetic feet. It’s a very fast way to position the light anytime your work area is near something magnetic. Picture yourself working on your circuit breaker box in well-illuminated-splendor, or in our case, huddled by the side of the refrigerator covertly devouring a late-night snack.

For times where you don’t have any metal to latch onto, the Gorillatorch can make like a tripod, or, like a 3 legged octopus whose legs can wrap around a surprising variety of surfaces. Chainlink fence, check. Tree branch, check. Rain gutter, check. The stripper pole at that place you went to after the hardware show in Vegas, uh, I have no idea if it would work on that. FYI, my wife occasionally reads my articles when she’s really bored. What I’m getting at here is that the Gorillatorch is impressively versatile in bringing light to whatever situation you need. Scott also pointed out that the Gorillatorch’s 3 aa batteries are engineered with the same polarity pointing up. . . enabling you to change batteries in the dark if you have to. As someone who has changed flashlight batteries in pitch black while night-hiking in the Grand Canyon, I can attest knowing polarity is a good thing. So is knowing where you packed your spare batteries, but that’s a whole other story. The fact that Joby put that amount of thought into battery orientation should also hint at the effort that went into the product in general.

The Gorillatorch uses new Cree LEDS which enable it to crank out 65 Lumen. The power dial also serves as a dimmer, and as a battery extender. Battery life ranges from 20 to 80 hours depending on how bright you set it. Even at maximum illumination, battery life is impressive. It’s also water resistant, which is especially useful on those unexpected plumbing emergencies. The light is extremely bright at the very center of the beam it puts out, with the perimeter of the beam much dimmer. But it definitely puts out enough Lumen to brighten up that dark corner you’re working in.

I think the Gorillatorch is a great product to keep handy for work around the house, in the garage, on your car, or wherever else you might need to shed a little light on the situation. Although it lists for just under $30, you can find the Joby Gorillatorch