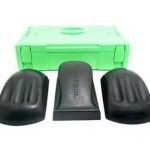 You know that rubber sanding block you have in the garage? The one with the three little nails on each side that fall out every time you go to replace the sandpaper. The one that no matter how snugly you try to get the sandpaper to fit, you’re left with wiggling that eventually results in the sandpaper tearing, (at which point expletives fly and you spend another 5 minutes trying to get new sandpaper back in). Maybe it’s time to consider breaking up with it, and going straight to a threesome . . . from Festool. If you’re frustrated with your old sanding block and ready to consider trying something new and exciting, it’s a good thing you’re reading our Festool Sanding Block Set review.

I would have broken up with my old sanding block a long time ago, but I just couldn’t do it. It seems there’s always some little sanding project that needs to be done. And that old sanding block seemed so convenient. Always there and ready to accept a new sheet of sandpaper. One time I did stray. I bought a sanding block that had a clamp on each end instead of the little imbedded nails I have grown to hate. I was optimistic. The new sanding blocks had strong looking clamps with teeth to bite into the paper. Despite the hope and excitement, how can I put this delicately, the new sanding block sucked worse than the old one. Sigh. Back to the old sanding block I went. 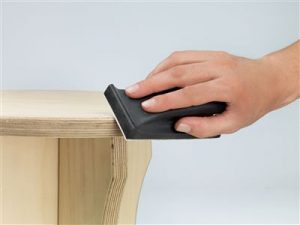 All this backstory leads up to a few weeks ago when Festool sent over their sanding block set to review (model M0107). Being of German origin, Festool doesn’t just send out their set haphazardly tossed in a cardboard box. Instead, the set includes a SYS MINI to meticulously store the three blocks in a happy home. Great for someone like me who is 50% German and has OCD tendencies (a wicked combination by the way). The sanding block set includes one rectangular sanding block and two that use round sandpaper discs. And all three use velcro, or as Festool likes to call their version, “StickFix.” I’m thinking of referring to everything velcro as “StickFix” (spoken in a German accent) just to see what kind of fun responses I can get from people.

The one rectangular pad is made from relatively hard material, best for coarse sanding and shaping. It is compatible with the full line of Festool 80x133mm abrasives, the same abrasives used with the RTS 400 and LS 130 sanders. The downside to this is you can’t just use that pile of generic sandpaper you have sitting in the garage. The upside is that you’ll be using high quality Festool abrasives that you won’t be cursing at each time you go to apply or remove sandpaper from the block. I was immediately impressed with how ergonomic the sanding block feels. The rounded area fits nicely in your palm, and a nook for your fingers on the right and left sides give you a great deal of control over the sanding block. Great stuff! 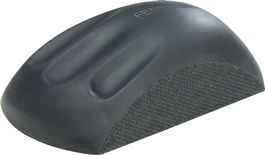 Initially I was confused by the inclusion of two seemingly identical sanding blocks that use round sandpaper discs. Festool then enlightened me that each of the two blocks are different density creating a hard and soft version. By soft, don’t think I mean marshmallow-soft. The softer block just has slightly more give making it ideal for fine sanding and touch-up work. These two round sandpaper versions are compatible with the full line of Festool 6“ abrasives (150mm if your Euro), the same abrasives used with the Rotex RO 150 and ETS 150 sanders. It’s clear that Festool paid close attention to ergonomics again. Three grooves cradle your inner fingers, while your thumb and pinky retain a solid grip on the edges of the sandpaper discs that fold up on each side. The way these cradle your hand again give a surprising degree of control and sensitivity to your sanding project.

I used all three Festool sanding blocks on some window trim I was working with and was really impressed with the sanding performance, and especially, the ergonomics. For those of you that are Festool fans, it will come as no shock to you that ditching your old sanding block for the shiny new Festool versions doesn’t come cheap. But then high quality tools rarely do. The Festool Hand Sanding Block Set M0107