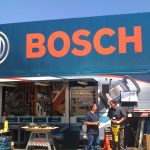 I’m on my way back from the 2010 Bosch Global Leadership tour which was held at their facility just outside Chicago. Naturally, all of you have been following our tweets and mobile pictures via @HomeFixated. If for some strange reason you were not glued to our twitter feed, you can find them on our profile page, or via hashtag #GLT10. To supplement the tweets, I’ll be posting a couple first impressions on some really great new products Bosch is rolling out.

Before you German tool aficionados get too excited, I do have to warn that all those attending the GLT were politely asked to take a blood oath swearing not to disclose some of the ultra-top-secret products coming in the not too distant and semi-distant future. They made us take the oath wearing Lederhosen. OK, not really, but I’m going to recommend it as a future media-security strategy. Frankly I’d do just about anything to not be seen publicly in Lederhosen. Thankfully we were not sworn to secrecy on all the great new products.

Before providing a little teaser on what’s coming up soon on HomeFixated, I wanted to share a little of the experience of visiting Bosch in person. After spending two days talking with the Bosch team and playing with all their latest and greatest tools, I feel like I got a sense of their corporate culture. It was a passionate and lively group of people, and they definitely did not give off the corporate drone vibe. They did, however, refer to their headquarters in Stuttgart as the “Mothership” several times. I’m not sure what this means. I can only guess Bosch is run by aliens masquerading as German engineers. This alien technology might explain some of the suspicious major technical leaps and “innovations” Bosch has been making. Hmmmm. 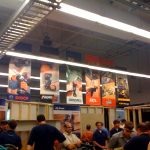 On the fist day of the GLT, Bosch’s original founder was quoted as having said something along the lines of “I’d rather loose money than sacrifice quality.”  While I don’t think he meant loosing money was a great long-term business plan, it’s clear quality was vital from the beginning.

From what I know about Bosch from my own tool-owning experience, and from the last couple days seeing Bosch in action, it’s clear to me that Bosch maintains their strong commitment to quality.  They don’t just stick a bunch of German engineers in cubicles and say “go make some great tools.”  Bosch proactively seeks out feedback from the people that actually use their tools, in the real world.  In fact, they are rolling out a “Joe The Pro” campaign to further strengthen the link between Bosch and their customers.  This is a hands-on company committed to quality and innovation.  Since Bosch is almost completely privately held, they also have the luxury of not being held captive to short-sighted mandates shareholders can wield. However, I did get the sense they must obey the Mothership.

So what does all this emphasis on quality and innovation result in? Luckily for all of us, some pretty sweet toys/tools!  Among the not-top-secret notables:

Bosch completely rethought the way miter saws should move, and the new glide mechanism is awesome!  A major evolution in how Miter Saws are designed.  It will redefine your definition of “smooth.”

Not to be outdone with Festool and their Systainers, Bosch has teamed up with Sortimo to provide easy to carry, stack, and transport tool and accessory storage boxes.

We saw video of this being tossed off the roof of a multi-story building and it kept playing just fine. The Power Box 360 is loaded with power/audio features, and might be the most durable audio equipment I’ve ever seen.

Bosch’s Joe The Pro got out a 9000 Horsepower nuclear-powered drill to demonstrate this bit cutting through a giant timber loaded with nails. Drilled like butter, right through nails. Then he used the same drill with a competitor’s auger bit. . . . not so buttery.

I’ll be posting some first impressions on the Axial Glide Miter Saw and Power Box 360, as well as other Bosch tastiness in the coming week, so don’t stray far from HomeFixated.com.  I’d also like to take this opportunity to thank Bosch and Strata-G, (their totally on-the-ball PR team),  for putting on a great event for this year’s Global Leadership Tour (and for bravely inviting new-media blogging riff-raff like HomeFixated)!  More GLT details (and pictures) coming soon!