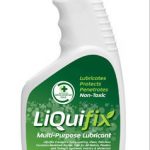 When I told my wife I was going to Las Vegas for what many loosely refer to a “business trip”, she was not particularly thrilled. When I told her I was going to check out some really cool lubricant, let’s just say that didn’t help my cause. Lastly, a friend helpfully let us know that prostitution is now completely legal in Las Vegas as well. Thanks buddy. Despite all this, I still managed to hop on a flight to Vegas to catch one day and one night of glorious Las Vegas action (oh, and the National Hardware show). At the show, I dropped by the booth for LiQuifix, makers of a non-toxic multi-purpose lubricant that has WD-40 and Liquid Wrench squarely in their sights.

Normally when you read a MSDS (Material Safety Data Sheet for those of you not hip to it) for just about any type of sprayed chemical product, things like “Touching this product will likely cause cancer”, “Inhalation leads to instant brain damage” and “Ingestion results in ebola-like hemorrhaging followed by a slow and painful death” are the kind of things that jump out at you. In the case of LiQuifix, the MSDS, although not entirely innocuous, is filled with lines like “This product is not known to contain any chemicals which are known to the State of California to cause cancer or reproductive harm”, “This product as sold does not meet the definition of a US EPA hazardous waste”, and “This product is not classified as acutely toxic based on established criteria.” How refreshing!

I had recently lubed everything that moves in our house, garage and immediate vicinity to test several Liquid Wrench lubricants. As a result, I ran into the tricky issue of not having anything squeaky around (toddler excluded). This dearth of squeakiness led me to some “alternative” testing: two grueling but not particularly well-known lubricant tests. Please note that for my own safety, neither test was conducted in Las Vegas.

Test 1, The Psychologist Chair That Barely Squeaks Test:
When I complained to my wife that I had de-squeaked everything around, she claimed she had the perfect test. My wife is a psychologist (which comes in handy daily). She proceeded to describe the following scenario to me: A client is on the couch, emotionally pouring their soul out. My wife then leans back in her chair, at which point an eardrum-shattering squeak pierces the session. The terrified client then goes silent and the session is ruined.

Being the helpful husband I am (and desperate for a squeak to lube), I offered to trek out to the office and test out LiQuifix on the chair. When I got to the office I asked my wife to test the chair beforehand so I could hear the offending squeak. She leaned back, at which point I heard . . . nothing. “Do it again please” I asked, at which point I heard what faintly may have sounded like a squeak (if I had bionic hearing). Utterly disappointed I proceeded to spray-down the entire bottom of the seat, which my wife claimed improved the squeak. OK, so this was possibly one of the lamest product tests I have ever done. On to plan B. It was time to break out the big guns.

Test 2: The Neighbor’s Truck Door With Insanely Loud Squeak Test:
After the office chair fiasco, I wasn’t going to take any chances. My neighbor George is an electrician. Some tradespeople make a little money and then go straight to the Ford dealer to buy a brand new F-350 pickup, which they then get a lift-kit for, and a shiny tool box, and a chrome roof rack, etc. Not George. He believes in trucks with “character”, which I can assure you his truck has plenty of. One particular character trait, is a door squeak that sounds like Satan himself was violently scraping two large, resonant pieces of metal together. George also leaves for work around 5:30 am, and his truck is parked really close to our bedroom. Need I say more?

I caught George outside one day and awkwardly asked if he’d be willing to let me lube his truck doors as a product test for LiQuifix. He graciously agreed. The result? Pure, blissful silence and smooth operation resulted. I can honestly say LiQuifix has improved my sleep!

In both tests I was struck mainly by the lack of smell from LiQuifix. A pleasant change from the strong smell that accompanies most lubes. LiQuifix describes their product as able to penetrate and lubricate all surfaces including aluminum, nylon and rubber, without pitting. It creates a corrosion resistant barrier and forming an ultra thin, non-drying, anti-static film. It has a high flash point of 275°F, twice that of aerosol
spray lubricants. It also has a high dielectric rating 35,000 volt/Mil
Per ASTMD 877 (meaning you’re less likely to electrocute yourself when using it around circuit breaker panels and the like). LiQuifix is even certified for incidental food contact (NSF Registration #136617). It’s available in everything from a 4 ounce bottle to a 275 Gallon Tote (that’s a LOT of lube)!

How will it hold up? I’ll keep you updated in the comments! But so far our sleep is still good. I think LiQuifix is a super alternative for more chemical-laden lubes. I’ll definitely be using it in our house. You can find a handy LiQuifix 16 ounce bottle from SafeHomeProducts.com for about $12.00.