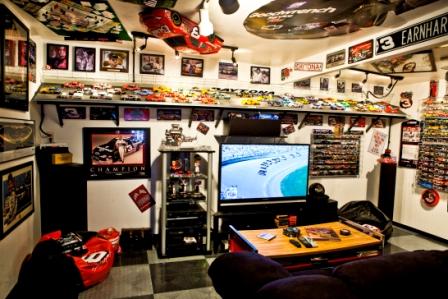 For many of us working schlubs, the idea of the man-cave is a dream, flitting around us just out of reach. But just because we can’t reach it doesn’t mean we can’t enjoy another man’s man-cave. For those who don’t know, there is actually a Man-Caves TV show, staring former Raven’s lineman Tony Siragusa and contractor Jason Cameron called “Man Caves.” This DIY show follows The Goose and Jason as they create some pretty awesome caves for some pretty crazy people including Snoop Dog and Artie Lang.

Some of you out there may be wondering what exactly a man-cave is. Well, as the name suggests, it’s a space that is designed for a man that is separated from the world and is often dark – hence the appellation “cave.” A man-cave is really a place for a guy to relax, kick back and hang out with his buds or with no one at all. I actually had the opportunity, and dare I say, the privilege of helping my dad years ago build a man-cave for his best friend. It wasn’t much, a little space above a two-car garage. But it did have a projector screen, surround sound, and a pool table, and made a pretty awesome place to watch the Super Bowl while not messing up the floral plates and antique wash basins that decorated the rest of the house.

While we, or at least I, will never have anything quite like that to prop the dawgs up after a long day’s work, there are some key elements that truly makes a man-cave a man’s cave.  First there has to be a big screen TV like the one here with the nice seating and décor.

Then of course you’ll need to decorate with some memorabilia. Things that you’re interested in, like sports or motorcycles, or in some cases like the picture to the left, movies and fictional worlds. There is often room for a bar or wine cellar and place for games such as pool, poker or indoor hoops.

If you’re interested check out oddee’s list of 12 super cool man-caves and the man-cave site for other inspirations. These man-caves have moved me to write my own little poem, which I’m pretty sure is going to win HomeFixated a Pulitzer prize.

Mid-day sun beamed o’er high,
Forcing me to, from every pore, perspire,
My mind drifted to a sweeter place to retire,
Decked in wood tones, where neon shown from the sky.

There Chewbacca, Gretzky, and Ruth greeted me,
Beckoning me to sit and rest my feet,
Perhaps I’d catch a game or 21 Jump Street,
Better yet some darts might set me free.

As I traveled home, o’er highway drone,
I could hear Sinatra and Bennett crooning for me come,
Bounding past a trike, toy cars and drum,
But alas, between tub and sink I sit on my throne.

Imagining of a place to be brave,
To relax and enjoy a snack or a dream,
Or to lift weights and let off some steam,
Maybe one day I’ll have my Man-Cave!