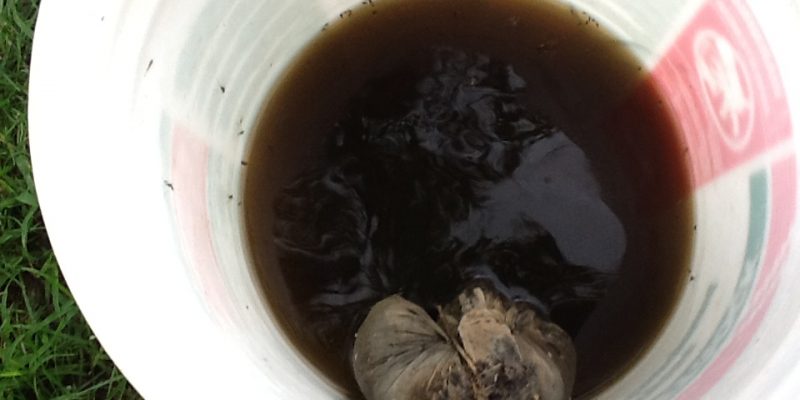 Sometime ago I extolled the benefits of making and using compost in the garden. A short list of benefits associated with compost include: adding important nutrients to the soil as well as increasing water holding capacity, soil temperatures, and nutrient holding capacity (often called cation exchange capacity for you soil geeks out there). In short, it’s pretty awesome stuff. However, there is another way of getting compost to the plants in a speedy and efficient fashion: compost tea.

As the name suggests compost tea is a liquid that is made from an infusion of compost. But, it can be a little more than that. At its most basic form you can add compost to a bucket of water and let it sit for a couple of days. This will get you some of the fertilizing benefits but not the whole shebang. But, why do it in the first place?

For starters, compost tea acts as a liquid fertilizer. Stewing the compost will release most of the nutrients stored in the compost. Since it is in a liquid form the nutrients are more readily available for the plants to be used. Second, by letting them stew, and going a step further than the most basic form, you add and increase beneficial soil bacteria that will help convert the (here’s a short bit of basic biology/chemistry) organic forms of nutrients (not like ‘oh is this soy latte organic?’) to inorganic forms of these nutrients which the plants can uptake. It’s like a quick jolt of java juice for your plants and a method that many organic gardeners swear by. In fact, my brother-in-law, the head groundskeeper at a college, puts it on everything including the turf for the sports fields.

Creating your own compost tea will give you a nearly endless supply of liquid fertilizer for free. It’s also pretty hands-off for a DIY fertilizer. You should start to see benefits nearly overnight (which in gardening terms is in a week or two). You’ll also transform into an organic gardener (as in ‘is this soy latte organic?), if you aren’t one already.

Note: Most seaweed fertilizer will say it’s organic and for vegetables, but will often have a warning that it has trace amounts of this metal and that. The seaweed is harvested from the ocean where it can trap what’s in the water. The metals are presumed to be there just like they would be in tuna or other fish and therefore they label it. If that’s a concern for you, just leave out the seaweed fertilizer ingredient.

For a slightly more involved technique for making compost tea, check out this video from Doug Green: