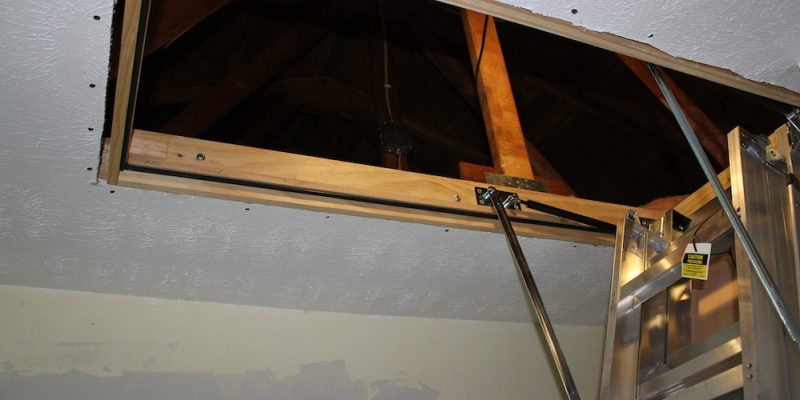 Tired of dragging out the sketchy stepladder whenever it’s time to schlep another load of worthless crap valuable mementos up to the attic? Instead of wiggling your butt through a 14” scuttle hole in the ceiling, wouldn’t it be sweet to just tug on a string and have a sturdy ladder drop down, leading to an opening roughly 2’ wide and 4 ½’ long? Sounds like it’s time to put the boxes down, hit the home center, and spend this Saturday installing a drop-down Werner attic ladder. Whether you’ve tackled an attic ladder install before or not, follow along with our detailed experience, including obligatory before and after shots.

Standard attic ladders fit an attic opening of 22-½” X 54”, and if you wanna supersize it, you can get one up to 25” X 66” in aluminum or 30” X 54” in wood. Of course, not every dwelling space has room for a full-size access ladder. But even if your ceiling space is tighter than Chris Christie’s Speedo, don’t despair, there’s a solution out there to ease your storage burdens. Werner makes a compact ladder that can fit in a space as small as 18” X 24”, with a weight capacity of 250 pounds. It’s great for setups where the only available access spot might be in a closet or a small hallway or bedroom, or a garage where you might not want to install a larger ladder. It can accommodate ceiling heights from 7’—9’10”, weighs only 15 ½ lbs, and can be easily installed by one person.

So Where You Gonna Put That Attic Ladder?

If you have an existing attic ladder that’s done its time, you’re in luck, you should easily be able to find a new ladder to fit the opening, and the hard part, prepping the opening, is all done. If you’ll be creating a new opening for your ladder, the first thing to do is to figure out where it should go. The easiest location often ends up being in a hallway, both for ease of access and because normally there isn’t a lot of furniture there to get in the way. Measure the height from floor to ceiling to determine which models will fit in your space. The Werner website has some great tips on choosing the right ladder for your space, including detailed specs on their various models, and videos demonstrating how they work and how to install them.

The instructions that come with the Werner ladders are excellent. They list all of the tools and miscellaneous screws, etc. you’ll need. The tools are pretty basic, and are likely already in your DIY tool crib. They give particular emphasis to the prep phase; making sure the stairs you choose are right for your space, checking clearances where the stairs will open and rest, and making sure there are no obstructions like ductwork, wiring or plumbing in your proposed location. They also provide thorough instructions on how to prepare your rough opening, including how to install a double header if you need to cut a joist (which sounds intimidating, but is really pretty straightforward). Werner (or more likely, Werner’s attorneys) makes it clear that if you don’t feel comfortable tackling the installation, you should hire a pro. But we don’t need no stinkin’ pro – we’re DIYers (or pro’s)!

A Greener Hole In Your Ceiling

The folks at Werner provided HF with one of their new AE2210 Energy Seal attic ladders to evaluate. It has an aluminum ladder, gas struts for smoother opening and closing, a load capacity of 375 pounds, and weighs in at around 55 pounds, so find a friend to help you with the installation (tell ‘em they can have first pick of whatever crap treasures you discover up in the attic). It comes well-packaged, and seems very sturdy and well-made. We have an older high-capacity Werner wooden attic ladder, and it has held up very well.

When you cut a hole in your ceiling to install any kind of attic access, you’re losing some of your insulation to do it, and you have the potential for your opening to act as a big chimney, sucking your conditioned air up and into the attic. The Energy Seal model comes with a gasket around the perimeter of the door that reduces air leakage by 60%, and an insulated door that provides five times the insulating value of an un-insulated model.

I installed the Werner Energy Seal where no ladder had ever gone before. I chose a spot in the hallway, with the opening roughly under the peak of the roof, for maximum headroom when entering the attic. After making sure my chosen space was all clear, I poked a drywall saw down through the ceiling adjacent to one of the trusses, then measured 54” along the truss and poked it through again. I then went below and used my drywall saw to cut, following the edge of the truss. I used a framing square at each end of the cut to square the line across, then cut along the adjacent truss, made my two cross cuts, and admired the hole! At this point, with a 2X4’ hole in your ceiling, you’re pretty much committed to the project.

Next, you’ll need headers at each end of the opening. The header at the hinged end of the stairs is especially important, as it bears the most weight and stress from the opening and closing of the unit. Make sure you use a double header, with two pieces of dimensional lumber the same size as your joists. Nail the pieces to each other, and across the opening, with three nails through the joist and into the end of each board in the header. Be sure the headers are as perfectly square to the opening as possible, so your unit will operate properly. At this point, the hardest part is done! The following eight-minute video shows how the honchos from Werner do it:

Minor Modifications May Be Needed

My prep was complicated to a small degree by two things: A 1X6” running right down the middle of the attic floor, with electric wiring stapled to it, and the truss connectors. The spacing between the trusses was 22 ½”, which is exactly what is needed; unfortunately, the trusses had been assembled using squares of ½” plywood instead of steel nailing plates. The plywood squares protruded into the installation zone by—you guessed it: 1/2” on either side, so they had to go.

Normally, messing with the structural integrity of a truss is something you should avoid, unless you want to be featured on HomeFail.com. This was a quick and sturdy fix, though; the trusses have mending plates on both sides of every connection, and after temporarily bracing the ceiling from below using a 2”X4” “T”, I pried off one plywood square at a time and immediately replaced it with a steel mending plate, nailing the crap out of it with joist hanger nails. The new connections were at least as strong as the old, and much shinier to boot.

The wiring problem was resolved by removing the section of 1”X6” that spanned the area the ladder was to go, then cutting the wire around the center of the span (yes, the breaker was OFF for that!)  I then added a junction box on either side of the ladder space, and added a length of wire of the same gauge (12) to re-connect them, routing around my opening.

Filling That Hole in The Ceiling with Your New Attic Ladder

Your next mission is to screw a temporary support made out of scrap 1”X4” material under each end of the opening, to hold the ladder in position while you bolt it into place. Be sure to follow the instructions for placement — the support at the hinge end only protrudes 3/8” into the opening, so the door will be able to swing down.

After temporarily securing the hinged end to the header with decking screws, you’ll check the unit for square. Next, just follow the instructions for the sequence to finish securing the unit to the headers and joists with the provided lag screws and washers, shimming where needed to keep it straight and square. If you have an impact driver, this is a great opportunity to put it to work; just be sure not to over-tighten. Even without one, it’s really pretty quick and simple. After it’s screwed in, remove the temporary supports.

Next, you’ll use your floor-to-ceiling measurement to determine how much of the ladder to whack off. The ladder can be used for ceiling heights from 7’8” to 10’3”, so most installations will require a trim job. Werner provides a table telling you how much to cut off each side, based on your measurement. Just mark the cut point on both sides of the ladder, square it up with your speed square, and use a hacksaw or reciprocating saw to cut the excess off.

Now, unfold the ladder all the way, slide the ladder feet onto the bottom, and put some pressure downward to make sure the ladder is in the fully-open position. If your finish flooring isn’t in place yet, use a piece of scrap material to hold the feet at the right height. Mark the holes on each side, drill ‘em out, and attach the feet with the provided bolts and lock nuts.

To finish your project, get some spray foam and insulate the gap between the joists and the ladder frame. To further increase your energy efficiency, it’s a great idea to buy or build a cover to go over the stair unit; most home centers carry them, and (like everything else on Earth) several versions are available from Amazon

Now trim out the edges, paint the door, and your hole in the ceiling will be transformed into a magnificent architectural feature. Or at least it won’t be quite as ugly. And it will be a helluva lot easier for you and your stuff to make the journey to the land of dust and trusses.

The Werner Energy Seal is one of the beefier residential attic ladders available, with a load capacity of 375 pounds. Other models are available, with lower load limits, but when I’m schlepping MY worthless crap valuable heirlooms—and my butt—eight feet up, I want the sturdiest unit I can get. The Werner AE2210 Energy Seal is available from several retailers, including Home Depot for $199. If the compact ladder is more your size, it’s also available at Home Depot for $94. Get one, ditch the sketchy ladder, and make your future schlepping easier and safer.