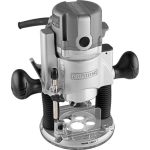 Back in the day, Craftsman hand and power tools were considered to be among the elite in choices for machining and woodworking professionals. And today Craftsman hand tools still have an edge over many others, as any wrench that breaks is replaced no questions asked. Usually it’s, “So sir, this 1 ¼” open-end crescent wrench just broke?”
“Uh, yeah,” you reply, conveniently leaving out the part about the 4’ pipe you slipped over the wrench to get a hair more leverage while trying to loosen the frozen wheel nut on your old Volkswagen that you didn’t know was left hand thread. So sue me.

But the power tool side of Craftsman began to take a back seat to the Porter-Cables and Skilsaws of the construction world. Now, I’m happy to say that this Craftsman router has put them back into the cutting edge of things.

This is not a hog out router. It’s not made for radical material removal. What it does do well is mortise hinges, lock faces, etc. Snickers aside, when I brought it into the shop it performed great. At less than a hundred bucks, greater still. I went back to OSH and bought two more.

Now, we’ve got no changing setups, each operation is a done deal, and consistency is awesome. It’s really easy to set up depths, and the micro adjustment actually works. It’s got three LED lights that light up what you’re working on, and another “live tool indicator” light that tells you it’s plugged in. Now you have no excuse for not unplugging the S.O.B. when you want to change bits. It comes with a spindle lock so there’s only one wrench to lose instead of two. The two collets that come with this router give you the flexibility to use both ¼” and ½” bits. It’s small enough to use ¼” bits and not be cumbersome, while having enough balls to spit out some single pass flutes and ogee details with ½” shank bits.

The vacuum attachment I throw away, so I have no idea if that works or not, but what is cool is the old style on/off toggle switch that’s right above the handle, reachable by your thumb for when the “Oh, $hit! The bit’s loose and I have to turn this thing off now!” happens. The rocker switches on other brands I’ve had to replace numerous times. This toggle switch appears to be really durable and has been no problem.

All in all, for the price (and I even got the last two at OSH during a 20% off sale on all Craftsman power tools – score!) and quality of this bad boy, I think it’s a real steal. The model number is 17540 and seeing as how designs change so quickly in the router world, I’d grab one of these for my garage or shop for sure. As with all power tools, be safe and remember my motto: Ten fingers to start the day, ten fingers to end it. You can pick up the Craftsman 17540 Plunge Router for a mere $90 from Sears online.